MAXSON AUTOMATIC MACHINERY COMPANY (Westerly, R.I.) offers a high speed delivery system on its precision sheeters that avoids marking sensitive materials when shingling the sheets. This design manages sheet flow by controlling the speed of the cut packet’s leading edge as it enters the overlap area, rather than nip pressure. The resulting action prevents stress marks from the stop roller and delivery belts while insuring sheet packets are conveyed trouble free to the stacker.

To permit high speed sheeter operation, sheets are overlapped in the delivery system to arrest the forward momentum of the packet as it enters the stacker, thus avoiding damage to the leading edge of the sheet. Traditionally, a series of friction driven stop rollers have been used to accomplish this requirement. MAXSON’s design uses a full width ring roll that is gear driven and includes a variable nip adjustment to compensate for varying thicknesses of material.

The overlap roll is geared such that the surface speed of the black rings matches the speed of the slow speed tapes. In this way the sheet decelerates evenly across the width of the delivery system by speed, rather than nip pressure. Additionally, the uniform contact across the sheeter eliminates sheet skewing, permitting higher speeds and enhancing pile quality.

The overlap roll carriage has an adjustment that allows the depth of the ringed roll to be set relative to the bottom slow speed tapes. This variable nip setting eliminates the burnishing on sensitive sheets caused by excessive contact with the packet’s surface. The top high speed tapes pass in between the rings of the overlap roll, removing the likelihood of belt marks. 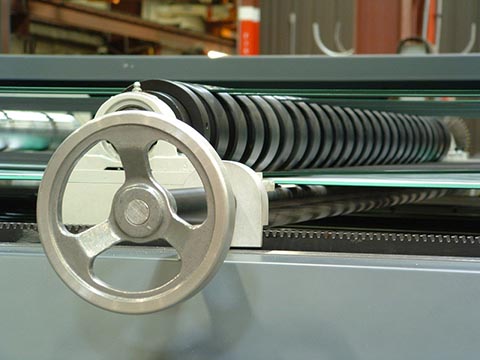