After more than six years of research and development to create a complete glazing line capability of integrating a fully digital process based on an open system, Durst has confirmed that first customer installations are scheduled to start later this year. The solution incorporates latest-generation Durst glazing, printing and finishing technologies that can work with glazes that are similar to conventional products.

On its stand at CEVISAMA 2018, Durst unveiled the Durst TRUE Full Digital Tile Production Workflow 4.0. The workflow was highlighted alongside production systems on the stand. These were the Durst Gamma DG Digital Glaze Printer and Gamma XD Printer, as well as the Durst ColorGATE True Ceramics Color Management Solution.

Durst’s single-pass glaze printer uses patented Durst RockJet® printhead technology, specifically developed and manufactured by Durst specifically for the ceramic glaze properties. It is the only technology that can handle water-based glazes with large particle sizes up to 45 microns, which is similar to traditional glazes.

The Gamma DG Digital Glaze printer features high resolution structures as used in the majority of the structured tiles produced, but has unlimited variations, as well as an ability to creative innovative and unique designs composed of different glazes on the same tile. These include gloss and matt finishes.

Durst’s XD Series next-generation digial ceramic décor printer has been designed for easy and fast maintenance and service. It boasts unrivalled print quality with no banding or lines, low grain visibility, excellent uptime and reliability, low maintenance and service costs. Other benefits include long printhead duty cycles with no purge or ink waste and a dry belt-cleaning system.

The ColorGATE True Ceramics Color Management is unique because it is the only solution with ultra-fast patch reading printed on flat or structured tile surfaces. It has fast color matching for new and repeating jobs, specifically desinged for ceramic inks and production conditions. Patented “Fingerprint” color control takes into account any variation over time, for example glaze or firing conditions.

Norbert von Aufschnaiter, Durst Group’s Segment Manager, Ceramics Division, said: “We had many more visitors to our stand at CEVISAMA 2018 than in previous years. Visitors were extremely interested in the latest developments in our Durst Digital Full Glaze Line latest-generation technology, which is on track. These are exciting times and we’re confident of starting installations later this year.

“The resultant line will guarantee maximum versatility, flexibility and quality, as well as extremely competitive management costs, space rationalization optimization of production and a high degree of management control through process automation.” 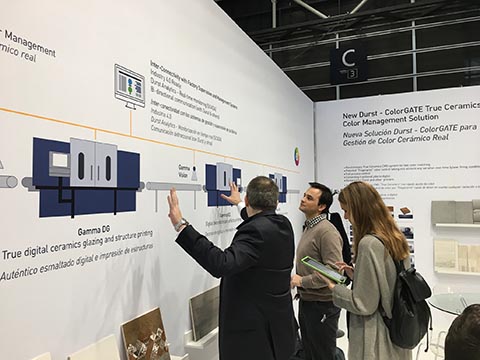