In line with the success stories of manroland web systems in the year 2017, there has been yet another breakthrough. The latest one being in Kolkata, India where manroland sold a three tower CROMOMAN 4-1 press to Bartaman, one of the leading Bengali language newspapers coming out of the eastern part of the country. The press has been sold with a Service Level Agreement and is the second CROMOMAN 4-1 to be installed in eastern India.

Founded in 1984, Bartaman Patrika is the second-most widely circulated Bengali newspaper in India. It is a Bengali daily published from Kolkata, West Bengal. Apart from the Kolkata edition, the newspaper has three other simultaneous editions, published daily from three major towns of West Bengal - Siliguri, Burdwan and Midnapore.

The CROMOMAN 4-1 – a press made for India

The CROMOMAN 4-1 has especially been designed for the requirements of the Indian market. It is a reliable, high speed, modular double width press that can cater to average run length between 250,000 – 400,000 copies per night, power fluctuations tolerance, fit into existing buildings, runs smoothly on Indian newsprint with no web severance. Requires no air conditioning and offers web width variability with ease of use and operation.

The CROMOMAN is a 3-tower 4-1 press. The press is capable of versatile printing possibilities such as 24-pages or 16-pages plus 8 pages. The press is also equipped with several automation systems. The PECOM-X control system offers the best possible technology for easy operation and short make-ready and changeover times. 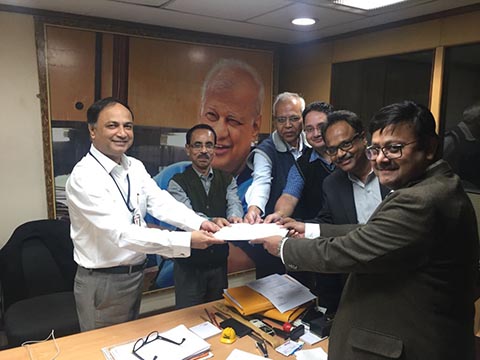