This year’s greeting card from Iggesund Paperboard is a pop-up construction created by the German designer and paper artist Peter Dahmen. The motif is a Swedish winter scene inspired by Iggesund’s guest facility in Hedvigsfors, which is located deep in the Hälsingland forest.

“For me, the trees and forests are so typical of Sweden. As well as being very important to the Swedish economy they also play a central role in Swedish culture,” Dahmen says about his choice of design. His interpretation of this Swedishness is the reason why the fir tree that rises up when the card is opened is disproportionately large.

The substrate is Invercote Creato 260 g/m2 and the advanced technical features include the fir tree’s height relative to the card’s base and the fact that as it is being raised up, the tree’s top must be unfolded by 225 degrees, which places tough demands on the paperboard’s properties.

Dahmen’s passion is to create three-dimensional works in paper and he has a special interest in pop-up functions. He likes movability and surprising effects but in purely graphic terms the card is fairly restrained.

“We could have poured on masses of bling and graphic effects. But both Iggesund’s project manager Anna Adler and I wanted a restrained card with an understated tone and not a graphic fireworks show,” he says.

Peter is very satisfied with the end result for several reasons. Invercote is particularly suitable for this type of construction thanks to its tear strength and its unsurpassed ability to be folded many times without the creases cracking. He also likes the tactile feel of the silky-smooth surface.

“For Iggesund Paperboard the annual card is not just about sending a greeting. It is also an opportunity for us to inspire people to use our paperboard materials Invercote and Incada more. We try to set a challenge with exciting techniques or difficult constructions,” Anna Adler says.

“The dominant fir tree is a reminder of the importance of the forest and its trees to forest industry companies like Iggesund Paperboard. They are the foundation of our business and our success depends largely on how well we manage this renewable resource,” she concludes.

The card is made of Invercote Creato 260 g/m2, which is double folded and glued to create a strong base for the pop-up mechanism. The motif is four-colour printed by the German pop-up specialists Albrecht creative paper products, who also did the hot foil stamping, embossing, protective varnishing and assembly. 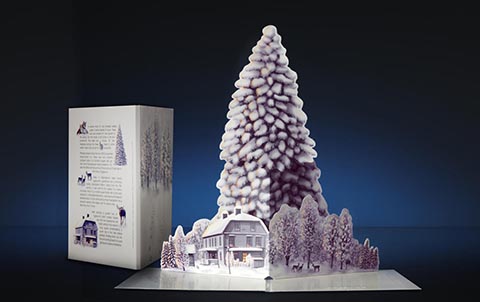 Iggesund’s greeting card for 2017 was designed by the German designer and paper artist Peter Dahmen. It is produced on Invercote Creato 260 g/m2. ©Iggesund