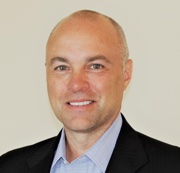 Black joins sgsco from Viamedia, Inc., one of the largest independent local cable and digital ad sales companies in the U.S., where he served as CFO. Prior to Viamedia, Black was CFO and a member of the board of directors of private equity-backed Vivint, Inc., which he helped grow from the 16th largest home security and home automation company in North America to the second largest before its $2.1 billion sale to Blackstone in 2012.

“Chris brings extensive financial, capital-markets and operational expertise, combined with a strong track record of building high-growth companies,” said Aidan Tracey, CEO, sgsco. “We are thrilled to add someone of Chris’ caliber to our organization as we continue to evolve and expand.”

Prior to Vivint, Chris was the CFO for Nasdaq-traded American Commercial Lines, where in 2005 he helped lead the second most successful initial public offering in the U.S. Chris also held the position of vice president and treasurer at NYSE-traded Wabash National Corporation and held several senior positions within the corporate and investment banking sector where he began his career.