On 29 November 1814, 360 years after Gutenberg invented the hand press, a new steam-powered double-cylinder printing press from Friedrich Koenig and Andreas Bauer was used for the first time to print The Times in London.

This year mechanical newspaper printing celebrates its 200th birthday. Possessed by the idea of using steam power to replace the back-breaking labour involved in printing with the hand press, trained printer and ingenious inventor Friedrich Koenig implemented a rotating cylinder into the printing process. This is why it is known today as rotary printing. Precision instrument-maker Andreas Bauer helped him build a fully functional press in England, which was then industrially advanced. With their cylinder press Friedrich Koenig and Andreas Bauer did not simply replace muscle power with machine power. They created the technical requirements for the distribution of printed media to less prosperous social classes and made an important contribution to establishing an informed society. 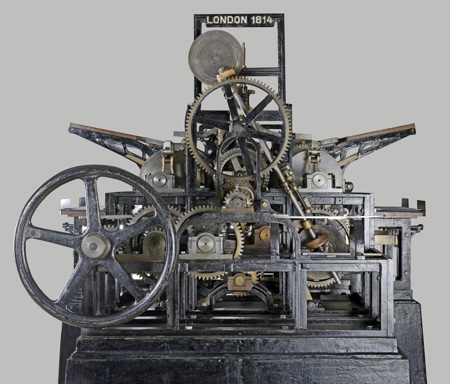 Nearly three years later, on 9 August 1817, the two pioneers founded the world’s first printing press factory Schnellpressenfabrik Koenig & Bauer in a secularised monastery in Oberzell, near Würzburg. Today Koenig & Bauer’s (KBA) main production facility can be found on the opposite side of the river Main. All other German press manufacturers originated, either directly or indirectly, from this Franconian cradle of press engineering, as qualified staff sought to go into business for themselves in the 19th century.

Key landmarks in over 500 years of printing history

The double-cylinder press for The Times in 1814 was an important landmark in the 500-year plus history of printing. Its hourly output of 1,100 printed sheets compared to 240 by Gutenberg’s hand press increased productivity by almost five times. Printing and distributing thus became faster, more up-to-date and cost-effective. This ground-breaking invention by Friedrich Koenig to guide paper, and later also many other substrates as individual sheets or as a web from a roll, over a rotating cylinder and to print directly or indirectly (over a blanket cylinder in offset) using a mechanically inked printing form is still used in analogue printing today. Digital printing is at times contact-free (inkjet), nevertheless, even this process involves rotating cylinders and drums for the paper run.

The premiere in London which is now 200 years ago initially only concerned newspaper printing, however, books, magazines, catalogues and much more were printed mechanically shortly afterwards. The “Times press” printed paper sheets on just one side (straight printing). However, Friedrich Koenig applied to patent his perfecting press almost at the same time. The presses became increasingly more refined and more powerful, and print quality improved. In 1832 Friedrich Koenig documented his vision of a web rotary press. Nevertheless, the inventor was not able to implement it as he died in 1833. His partner Andreas Bauer and widow Fanny Koenig continued his life’s work. Other manufacturers in Germany, England, Austria and the USA sprung up and drove technical advances in press engineering with their ideas.

Under the auspices of Friedrich Koenig Jr. Koenig & Bauer delivered the first web rotary press to Magdeburgische Zeitung in 1876. The conical former developed in the USA soon after paved the way for the arrival of folded newspapers and further improvements to performance. In 1888 Koenig & Bauer shipped the first four-colour web press to St. Petersburg. The very first special presses for printing luxury colour products followed at the beginning of the 1890s. Additionally, the company’s interest in banknote printing awakened, a field in which KBA has been a leading press supplier for more than 60 years.

New ideas and courage are needed even today

The list of Koenig & Bauer’s technical milestones since the invention of the cylinder press by both company founders 200 years ago is extremely long, but would somewhat overshadow the importance of the 29 November 1814. Over the last 80 years the printed newspaper as a channel for information and advertising has faced growing competition from the radio, television and more recently online and mobile media. However, it has retained its high level of acceptance and credibility with readers, as well as its superior lasting advertising impact. There are still opportunities for those with the courage and creativity shown by Friedrich Koenig and Andreas Bauer two centuries ago.