Upgraded ColorWash XL Speeds Up Throughput and Lowers Energy Use

After the successful installation of many of its ColorWash XL washing machines to accompany its digital textile printers, Hollanders has now incorporated a series of upgrade refinements designed to increase sustainability and throughput and reduce noise levels. Now able to handle higher drying speeds across different polyester-based fabrics, the lower energy required along with reduced amounts of water both contribute greatly to greener production and more efficient cleaning cycles. All new systems will incorporate these features, while existing installations can have the modifications retrofitted on-site.

The most significant change to the ColorWash XL is its innovative new suction method that is used to generate faster drying with a dedicated system to vacuum the water out of the media instead of blow-drying the fabric. This results in much drier material, leading to reduced subsequent ironing times and, by removing the water and any excess ink residue which has been captured by the detergent, improved cleaning is also achieved.

All energy used in the vacuum pump process is now also employed to heat the rinsing water. By recycling and optimising the power requirements within the system, and limiting the amount needed during the washing process, the overall level of required resources is lowered, increasing sustainability.

With the ultimate goal being to increase production rates, the revised 3.2m ColorWash XL can now process open structured light materials, such as flag fabrics, at speeds which are around 50 percent higher. Thicker materials can be worked at nearly double the original extent, also signifying a huge difference in throughput. Where speeds might not appear to be faster because of the materials’ characteristics, such as with residue, coating and construction, energy savings of up to 30 percent have been generated. By increasing washing cycle rates, overall resources can be reduced by as much as 50 percent, resulting in minimal water consumption and lower energy usage.

There has also been a revision in the design of the forced water rinse tube which provides an additional mechanically forced washing cycle as a complementary system to the existing brushes. These brushes remain an integral element in the process as they are employed for the thorough removal of any surface particles, with the added rinse tube allowing the penetration of the fabric to ensure that all particles within the fibres are flushed out.

“After talking to customers, we realised that using water suction in the pre-drying stage is a more effective method than blow-drying the fabric. We also wanted to reduce noise levels as well as increase efficiency,” explains Peter Hollanders of Hollanders Printing Systems. “Instead of having fans and tubes, the entire construction and operation is now far simpler and more effective, with noise kept to a bare minimum.”

A modular roll-to-roll system that provides washing, drying and ironing, without the need for operator intervention, the ColorWash XL is fully automated. It incorporates on-board control of water temperature, washing speed, soap concentration, media tension, drying and ironing. Although it is designed to support print produced with the ColorBooster XL and ColorFix units it is also available as an independent option which can be used with other manufacturers’ print and fixation machines. 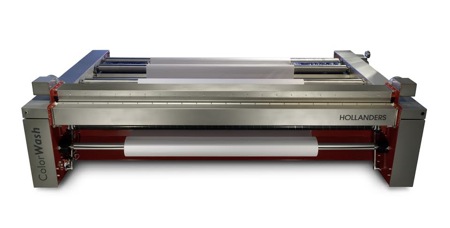