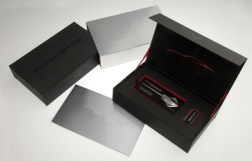 “The Davey Awards is the most recognized small-agency awards competition on the planet, and we are extremely proud to have been a part of it. Earning a Gold Award for the Corvette Stingray press kit is definitely an outstanding achievement for PCG,” said Randy Fossano, President and CEO of Premier Communications Group.

This year’s Davey Award winners were chosen from more than 4,000 entries submitted within 11 different categories, with the Gold Award being the highest honor for each category. Entries were evaluated by their distinction in creative work and by their merits based on the International Academy of the Visual Arts (IAVA) standard of excellence.

PCG was selected by General Motors to design and produce the press kit for the 2014 Chevrolet Corvette Stingray unveiling at the 2013 North American International Auto Show Media Days, as well as an exclusive preshow event. The agency was tasked with creating a custom package fashioned of deluxe materials to reflect the sleek and luxurious feel of this seventh-generation vehicle.

“From the new Corvette badge emblazoned on the outer sleeve, to the custom serialized plaque that features an actual fender badge from the Stingray, our team set out to create a stunning piece that would capture the truly historic nature of the vehicle, and I’m proud to say we accomplished that.”