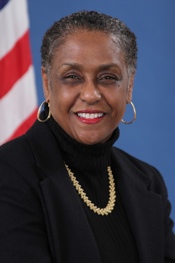 WASHINGTON - EBONY Magazine names Public Printer Davita Vance-Cooks to their 2013 Power 100 List. The list honors influential African-Americans who have made noteworthy accomplishments changing the course of history over the past year from many disciplines, including business, medicine, sports, media, religion, the creative arts and more. Vance-Cooks is named under the "Firsts" category for being the first female and African-American to lead the U.S. Government Printing Office (GPO). She joins President Barack Obama, actress Kerry Washington, NBA legend and entrepreneur Earvin "Magic" Johnson, and activists Harry Belafonte and Marian Wright Edelman on the 2013 Power 100 List.

Vance-Cooks was confirmed as Public Printer of GPO on August 1, 2013. She brings more than 30 years of private sector and Government managerial experience to the position, including nine years of senior and executive management at GPO. Under Vance-Cooks' leadership, GPO continues to strengthen its role as the official, digital, secure provider of the Federal Government's information products and services.

"It is an honor to be named to this list of distinguished leaders and trailblazers," said Public Printer Davita Vance-Cooks. "I am proud to serve and lead GPO, as our employees continue to find new ways of  Keeping America Informed on the three branches of the Federal Government."