The Wall Street Group Printers Rebuild, Endure, and Thrive in the Wake of Hurricane Sandy

Jersey City, NJ. . . On the morning of October 29th, the paper was loaded onto double skids, sand bags were placed by the large overhead doors of the plant's loading bay, the lights turned off, and employees sent home where they waited, for Sandy. That night, she hit.

The next morning, Al Basile, Sr. and Philip J. McGee of The Wall Street Group arrived at their plant of 43 years to find an overhead bay door to their building bent and lying in the parking lot.  Skids of wet paper were broken and strewn all over the area: in the road, in the grass, on the fences. Inside, the building was dark and wet, pallet skids were knocked over, coating the floor with wet paper. The devastation that Sandy brought upon the building was astounding, including the visible four-foot water marks left behind by the flooding. There was no power, no heat, and no phones. 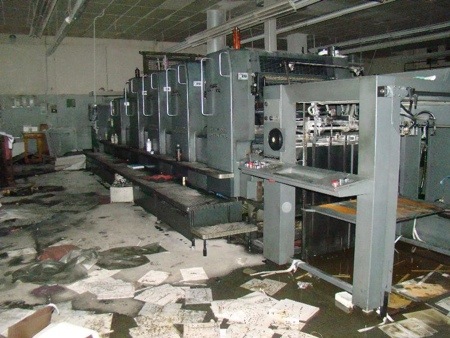 Now it was time to get to work.

What was truly remarkable was that their first order of business in rebuilding was to off-load the customer work they had in-house so that deadlines would be met and schedules maintained.  The projects that had been printed and waiting to be delivered prior to the storm were destroyed and had to be reprinted.  All of this work was sent to four or five printer partners in the area that were not as adversely affected by Sandy, and after two weeks the network was up, allowing jobs to be sent electronically. A good start, but such a long road to go.

While these pressing jobs were taken care of they acquired pumps and generators and dumpsters so that they could start to clean, repair, and rebuild.  Long-term relationships with service companies and mechanics paid off as these folks pitched in with employees to get the plant back on line. Never once did they think about closing the doors and retiring. These seasoned men, the true salt of the earth, thought about getting their plant and their business back to the place it had been -- where both their customers and employees depended on them.

January was the start of everything coming together, but it still remained a bumpy ride. All stored materials needed to be replaced. The mechanics, working with the pressmen, pulled out and replaced about 50 motors of varying sizes from the salvageable presses that were damaged by the flood waters. Their digital presses were completely ruined and so new state-of-the-art machines were purchased that today make up half of the business at Wall Street Group.

Little by little all of the equipment was either replaced or fixed.  All of the printed material that was stored at the plant was reprinted and today is safe and ready for customers. Despite having no electricity for two and a half weeks and no heat for five months, they got the job done. If not for the fortitude of their staff, their very loyal vendors who helped rebuild the motors and the printing presses, and their empathetic and understanding customers, the presses would remain silent. 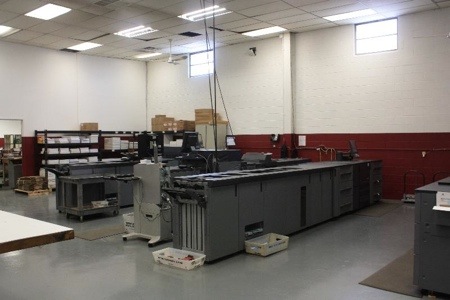 As with every piece of equipment that needed to be rebuilt, so too the company and its owners and employees were rebuilt and today The Wall Street Group endures.  After a long delay in receiving assistance from FEMA and still battling with insurance providers, the nature of the owners of WSG remains and endures as well: that toughness, that grit that got them through the worst storm to hit the Northeast in recorded history. They not only survived, but now they thrive. Everything is new again, and growing. As Phil McGee says, "We're better than ever."

The Wall Street Group, Inc. has been a full service offset and digital printing company since its inception in 1966. Operating within its strategically-situated niche, combining the services of the small copy shop with large-volume advertising and magazine printers, you will find our personal touch and experience extremely beneficial.