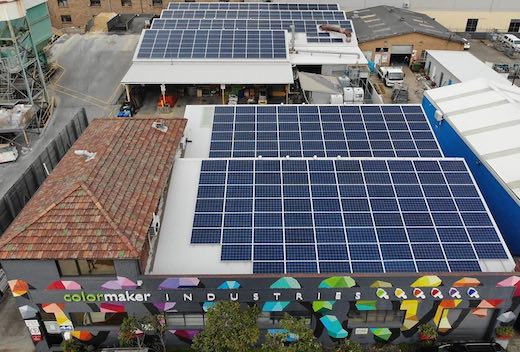 That was a day short of 40 months since the array was first powered up on 18th September, 2019, in the midst of Australia’s Black Summer bushfires. Since then, despite first the smoke of the bushfires and then 3 successive years of La Niña rainfall, the solar array has pushed out clean electricity every single day, culminating in this achievement.

The installation of their solar array proved to be a jumping off point for the Colormaker business, which has now followed up with three EVs for deliveries and staff transport, an electric forklift (no more LPG on site), a more energy efficient air compressor, a small battery to soak up some of the surplus electricity, and even more in the wings.

The solar array was originally designed to produce around twice as much electricity as the business needed. However, being a producer made Colormaker a lot more conscious of their own use. The new compressor was the biggest factor in getting overall electricity usage down 20%.

“Having such a huge energy surplus has been a great enabler for Colormaker” said MD, David Stuart.

“Notwithstanding the very real effects of La Niña, we now produce 2.2 times as much electricity as we use. If the sun comes out and stays out, we might get that up to 2.4. Even so, for every single kWh that we’ve purchased over the past 12 months, we put 4.44 kWh into the grid. Since the battery went in, we’ve also been able to bring our demand down to 1/7th of what it was when we first installed solar, taking further strain off the grid.”

“Our current projects on-site are working towards eliminating buying any electricity during the evening peak and to improving self-sufficiency; the first battery is moving us rapidly in that direction. Against an historical self-sufficiency average of 65% (we could still only supply 65% of our electricity needs), for NOV/DEC we achieved a record 83.5% and expect that to be bettered in January. Once we install our big battery, we’re confident that we’ll get above 90%, possibly even 95%” Stuart said.

“Looking beyond our own site, the use of one electric vehicle looks set to have saved 4 - 5 tonnes of GHGs p.a. from vehicle emissions vs a traditional ICE vehicle. To close out 2022, we acquired two more EVs but are really looking forward to the delivery of our Australian made big battery and Aussie made prototype delivery van - with a much bigger range and payload capacity, we see this vehicle as being a game changer.”

While their objective over the next 2 years is to be carbon neutral by the end of 2024, until the big battery and van arrive, Colormaker is getting on with business, putting a little bit of Northern Beaches sunshine into every drop they make and making the world a better place through colour.

Colormaker/PERMASET Inks will be exhibiting at the 2023 Printware & Promotion Show at the NEC, Birmingham, UK 26th – 28th February.