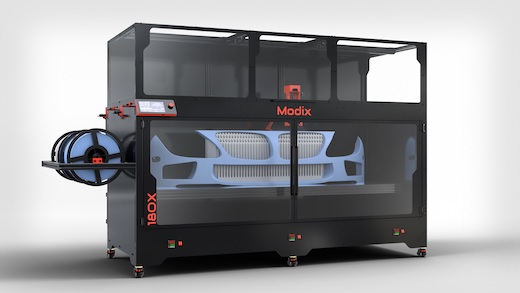 ? IDEX dual printing – IDEX stands for independent dual extruder, where each extruder can park outside of the bed while inactive. IDEX reduces much of the manual labor needed to remove support by efficiently using breakaway support filament and allowing the print of advanced models with internal geometries using water-soluble filament. The IDEX add-on is a significant upgrade in Modix’s offering.

Fast 3D Printing - Travel of up to 350 mm/s, high quality printing at 100 mm/s and higher for draft printing. The higher speed was made possible thanks to the use of strong Nema-23 motors on the X axis instead of Nem-17 as before. As well as by slashing the weight-load on the Y axis motor by half thanks to the IDEX. With IDEX configuration, there are two Y axis motors, one per each extruder.

Mr. Shachar Gafni, Modix CEO: "Modix continues its journey to become a market leader by presenting top of the line technologies yet maintaining outstanding price-performance ratio. Our unique modular self-assembly kits approach allows us to move fast and improve our platforms gradually over time instead of waiting for a major release. After releasing several key improvements over the past year including a new print head, clog detector and a magnetic bed, now it is about time to introduce a new refreshed base platform. As always, backward compatibility is an important value for Modix, as a result owners of previous models will be able to upgrade their machines with these new technologies. Owners of Modix large 3D printers enjoy higher return on investment over the course of time in comparison to a closed box alternative offering. “