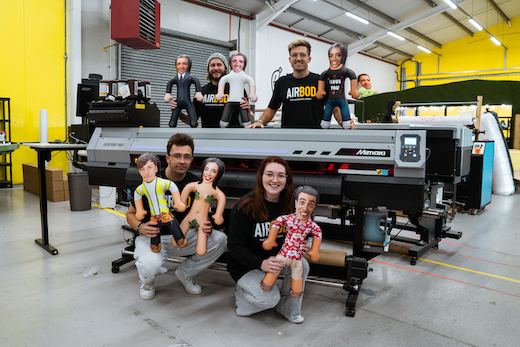 The company has traditionally used Epson dye sublimation printers to produce its products, however, the addition of Mimaki UV LED capabilities has enabled it to launch a new bespoke inflatables brand, Air Bod, just in time for the current Christmas season.

“Sublimation is excellent but there are some things you can’t sublimate, which is why we approached CMYUK as it offers products across all ink technologies,” says Charlie Rodman, founder, Nerdy Banana.

Entrepreneurial flair
Nerdy Banana is the umbrella company for eight direct to consumer brands. It was started by Charlie in 2011 who began producing holiday T shirts for friends. Today the company has a permanent staff of 24, and fulfils 200,000 orders per year to over 40 countries. Brands include Super Socks, Dogsy, Snugzy, Petzopia, Nifty Gifty, Meowie, Thunder Buddy, Bunker Buddies, Doodle Togs, Bikimi, and Air Bod.

Not only does the company manage its own D-to-C brands, but its in-house agency helps start-ups and businesses make online impact by offering web design, video content, paid social to SEO, PPC, and brand development.

It holds licenses from Warner Bros England and numerous football clubs for its personalised gifts. In 2020 it began a relationship with Selfridges London, Birmingham, and Manchester plus sister brand, Arnott’s in Dublin, to install a physical Super Socks shop in-store where customers can design their own socks, which are printed and sublimated on heat presses while they wait.
“In Selfridges there were queues and people were waiting half an hour just to create this option. It was crazy. You see so many personalised gifts now that are so boring, but this is really different, presented in a creative and fun way,” says Charlie.

Mimaki prowess
Nerdy Banana approached CMYUK as it needed a printed solution for its new inflatable brand Air Bod that offers a range of customised inflatables including dolls and pillows.

Charlie visited CMYUK’s demonstration and training facility in Shrewsbury where it print-tested the materials it had sourced for this brand.

“We came up to CMYUK where we printed our materials on the Mimaki. We then took them away to wash and came back again. We really put the printer through the mill, and it was all good,” says Charlie.

The Mimaki UJV100-160 is a 1.6m wide UV LED printer that offers a resolution of up to 1200dpi. It supports a wide variety of materials including tarpaulin, PET film, and textiles. Its two-layer printing ability allows white ink is used for transparent PET film, while clear ink can be printed to achieve a topcoat varnish effect. Nerdy Banana opted for a 4-colour model only, as it prints to a white base material and so it didn’t require the white ink option or the clear ink either.

Future expansion
New brands are planned, and the success of the physical retail while-you-wait experiences may well expand. The company is currently in the midst of setting up a warehousing and manufacturing facility in Los Angeles to service the growing US and Australian markets. Says Charlie, “We send lots of products out to these places, and with the high cost of shipping, we’re just not going to be competitive enough unless we’re out there on the ground. We’re constantly adapting and want to keep innovating. Gift giving is fun. It’s nice to be able to give someone a laugh and a giggle.”