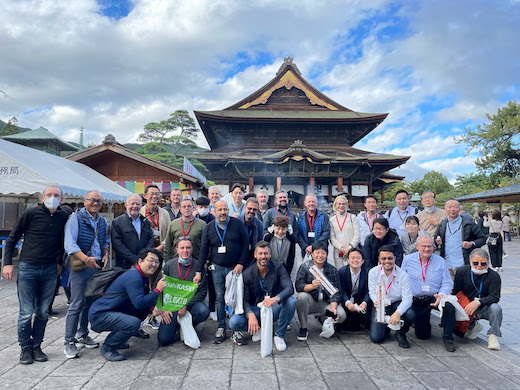 Asahi Photoproducts Division’s first AWP-DAYS in Japan was a huge success, with attendees from 12 different countries.

Tokyo, Japan & Brussels, Belgium. Asahi Kasei, parent company of Asahi Photoproducts, a pioneer in flexographic photopolymer plate development, today reported it conducted a successful VIP event in Tokyo attended by AWP customers from 12 different countries, including Spain, Switzerland, Italy, Belgium, Germany, United States, Korea, Thailand, and, of course, Japan. The event was designed as a combination of education and entertainment to express the company’s deep appreciation of the partnerships these attendees participate in. Attendees included flexo printers/converters, suppliers of hardware and software to the industry, and repro houses. Another goal of the event was to strengthen the relationships among the various partners who attended, with the ultimate goal of a stronger, more sustainable flexographic industry. The event was held from 7 to 11 October.

“This was our first attempt at organizing such a complex event,” said Miho Ohigashi of the Photoproducts Global Marketing Department. “Of course, we wanted to educate everyone on the latest AWP developments, including the achievement of Carbon Neutrality in partnership with the Carbon Trust for our AWP™-DEW CleanPrint water-washable plates, and share with them how we are working on our Carbon Management plan to make them even more sustainable in the future. We also felt that a tour of the plant was important, so they could see for themselves the implementation of our technology in daily production. But we also wanted to introduce some socialising to the event and give our visitors an opportunity to experience first-hand important aspects of Japanese history and culture. The feedback we received was overwhelming, and as a result we plan to hold a similar event every year to broaden the understanding of the value of our sustainability efforts as they relate to the flexographic industry.”

Ms. Ohigashi noted that visitors were treated to a variety of unique Japanese cultural and historical elements, including soba noodle making, golf playing, tofu cuisine, visits to shrines and castles, a sumo tour, a Tokyo boat cruise, and, of course, generous doses of Japanese Sake.

Ronnapop Viratt, General Manager of CCL Thailand, commented, “Asahi Kasei’s AWPTM -DAYS totally demonstrated the Omotenashi way of hospitality, wholeheartedly looking after their guests. I fully believe they can be even more successful as they already have very high-quality products and service in place, with more improvements to come.”

The Value of Achieving Carbon Neutrality

Asahi Kasai and its subsidiary, Asahi Photoproducts, have spent many years working toward a more sustainable flexographic industry and have set for the entire company the important goal to be Carbon Neutral by 2050. Achievement of carbon neutrality for the AWP™-DEW CleanPrint water-wash flexo plates was a major achievement toward that goal. “Sharing the story of our sustainability journey, including the demonstration of our new AWP™ water recycling system, was also an important element to this event,” Miho Ohigashi added. “We hope that sharing our story will encourage our industry to significantly reduce its carbon footprint.”

The event also included a panel discussion with full participation of all attendees on the topics of sustainability, the mutually beneficial relationship between flexo and digital printing, and the importance of automation.

For more information about flexographic solutions from Asahi Photoproducts that are in harmony with the environment, visit www.asahi-photoproducts.com.