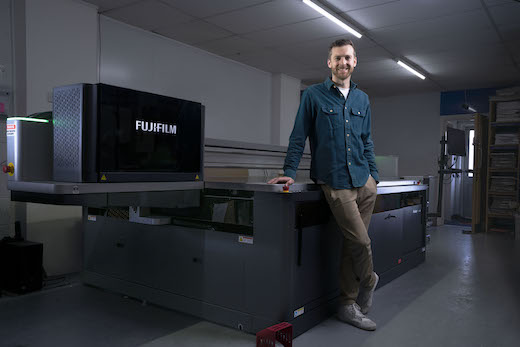 UK signmaker says the performance level of the Acuity Prime is far beyond any other flatbed printer at a similar price point.

Kent-based digital print company, Ebbsfleet Printing Solutions, has over 20 years of experience in sign making, servicing Gravesend and the surrounding area. Formed in 1999, the company has built a reputation for service and quality which has seen it supply major Local Government Authorities as well as leading supermarkets. Late last year, the company was looking for a highly efficient flatbed printer, and upon discovering the Acuity Prime from Fujifilm, they were so impressed that they invested in the new machine in January 2022 through RA Smart – one of Fujifilm UK’s distribution partners.

Ebbsfleet Print Solutions initially booked a video demonstration of the Acuity Prime, and after being sufficiently impressed by the printer’s capabilities, the company immediately booked in for a live demonstration at Fujifilm’s facility in Broadstairs in late 2021.

“We almost didn’t believe what we were seeing during the video demo,” says Sam Cherry, Director of Ebbsfleet Printing Solutions. “The printer performed beyond our expectations, but as it’s a new printer to the market we felt it was necessary to go and take a closer look. We went to Fujifilm’s facility in Broadstairs and liked what we saw so much, we placed our order there and then.”

Cherry believes such was the quality of print produced during both the video and live demos, that he is more than comfortable saying that the Acuity Prime is by far the best printer of its kind. “It’s our belief that the Acuity Prime flatbed performs at a level above any other printer at this price point,” he says. “In fact, the other machines we considered that did offer this level of print productivity were typically double the price.”

The printer was installed at Ebbsfleet Printing Solutions in the middle of January, with Cherry saying that the machine has already made a big impact on operations. “The Acuity Prime enables us to provide a better service to our customers, meeting their deadlines in a world where time is of the essence. We can provide a more streamlined approach along with a great end product. We’ve only been using the printer for a very short time on Acrylic, Foamex and Dibond so far, and are already really impressed with the output.

“I don’t believe there is any better way we could have spent this amount of money in terms of the overall quality, print capability and production capacity we’ve just added to our business than with the Acuity Prime.”

Kevin Jenner, European Marketing Manager, Fujifilm Wide Format Inkjet Systems says: “We’re delighted with the impact the Acuity Prime has made on Ebbsfleet Printing Solutions’ business. The machine is part of our ‘new blueprint for wide format’, designed from the ground up to offer unrivalled ROI, and it’s immensely gratifying to see our confidence in this new flatbed press fully vindicated by such a respected UK sign and display business.”