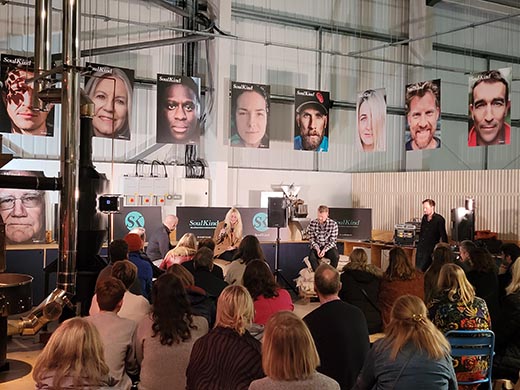 Fujifilm was pleased to support SoulKind at its magazine launch party in Cheltenham last week. The event featured stunning portraits printed on the Acuity Prime and high quality promotional material printed on the Jet Press 750S, while the magazine itself was offset printed using Fujifilm Superia processless plates.

The independent publication is the result of a collaboration between photographer Chris Boulton and brand consultant Jamie Rudd, who was inspired to create a positive magazine after being in a life-changing car accident in 2018.

The annual magazine explores the inspirational lives of multiple ‘souls’, who each reveal the lessons they have learnt as a result of their trials.

At the launch party, which took place at Rituals Coffee Roasters in Cheltenham, six subjects from the magazine joined 28 Summers podcast host Jay Worthy on stage to give more insights into their experiences that are showcased in the magazine.

The subjects included: former professional rugby player Ed Jackson, who manged to climb Snowdon after pushing himself to recover from severe neck and spinal injuries that left him unable to walk in 2017; Scott Jenkins, who has competed in numerous Ultra Runs over the last 11 years; Jacqui Furneaux, who travelled around Asia on her Enfield 500 motorbike after her marriage broke down; Hezron Brown, who won a Pride of Britain award in 2019 for his mentoring business after spending his teen years homeless and in a Birmingham gang; Dave Corn, who injected excitement into his life by learning to skateboard, skating across Australia and setting up a llama glamping resort; and Lucy Shepheard, who has explored the depths of the Amazon jungle.

Large format, high-impact portraits of the magazine subjects, shot by photographer Chris Boulton and printed on the Acuity Prime, hung from the ceiling above the stage.

In addition, high quality postcards printed on the Jet Press 750S, were also produced for the event for guests to take home, and both the first and second issues of the magazine were available to buy at the launch party.

Commenting on the success of the event, Boulton said: “Thank you to everyone who attended. It was humbling and somewhat emotional to have so many people turn up to support us.”

Rudd added: “We have met so many kind, beautiful people who have shared their life stories with us. We have laughed and cried, we have listened and importantly, we have learnt so much.

“With so many more stories still to tell, the future for SoulKind is exciting.”

Mark Stephenson, Product Manager of Digital Printing and Press Systems at Fujifilm, said: “It was a pleasure to attend this fantastic, uplifting event. The Acuity Prime-printed portraits really captured the resilience of the ‘souls’ featured in the magazine.

“Fujifilm looks forward to supporting the SoulKind team in its future ventures.”

Kevin Jenner, European Marketing Manager at Fujifilm, added: “It was an excellent evening with a great cause. The high-impact, large format portraits printed with the Acuity Prime, as well as the promotional material produced with the Jet Press 750S, helped SoulKind to deliver its powerful message, leaving the audience feeling uplifted and inspired.”