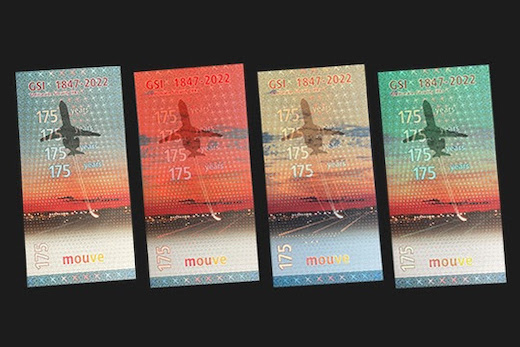 Checking banknotes and other secure documents more easily – this is possible with the innovative security feature mouveGSI developed by Gleitsmann Security Inks (GSI), a subsidiary of hubergroup. Under UV light, the feature ink shows a colour transition and an afterglow effect when the light source is switched off. This “traffic light effect” can be checked by using existing tools and sensors. An Asian banknote customer already successfully uses mouveGSI.

To achieve this extraordinary effect in one single ink, GSI uses proprietary know-how, which was developed in less than a year together with its partner Leuchtstoffwerk Breitungen (LWB), a manufacturer of luminescent materials, special chemicals and unique types of pigments based in Germany. The traffic light effect combines well-established UV images with phosphorescence and a moving effect of interchanging colours (red, yellow, green) not previously known to the industry. The feature can be checked by police officers, retailers, banknote experts, and sorting machines using existing tools or sensors. More product details can be found on www.mouve.ink.

As a specialist for high-security inks, the Berlin-based company supplies products to various government-owned as well as commercial security printers worldwide. Since 1976, it has been part of the international ink and speciality chemicals producer hubergroup and will celebrate its 175th anniversary next year together with the parent company.

Heiner Klokkers, the Chairman of hubergroup’s Management Board, comments: “I am extremely proud about the recent development of our specialist entity GSI. Following a record year in revenues in 2020, 2021 will see another all-time high in turnover. mouveGSI is an outstanding security feature, which has already been adopted by an Asian banknote customer only a few months after its launch. Today, I am working closely with the management team of GSI on defining the next strategic initiatives, which ensure a continuation of the solid growth strategy of GSI, being a highly profitable part of hubergroup. I look forward to celebrating 175 years with GSI’s customers, partners and staff members next year.”

At its site in Berlin, Germany, GSI employs 75 highly skilled workers, physicists, chemists as well as commercial experts and generates an annual turnover in the double-digit million Euro range.