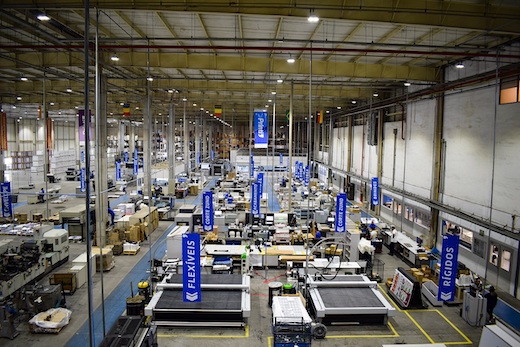 The company, part of the Cimpress Group, has ordered a Tau 330 RSC to further expand its label production

Brixen, Italy – Headquartered in a 9,000 square meters structure in Barueri, next to São Paulo city, Printi, a pioneer in web-to-print technology in Brazil and one of the main online printers specializing in on-demand products in Latin America, has just announced its renewal of the partnership with Durst for the label printing segment through the investment in a second model of the Tau line – in this case, the Tau 330 RSC.

Founded in 2012 by Florian Hagenbuch and Mate Pencz, since 2014 Printi has received investments from the Cimpress Group, which, in 2020, became the company's main shareholder. Since its creation, the printer has specialized in the production of high quality prints on demand and customized prints, and for that, having the latest technology was essential.

“Of our 437 employees, 35 are dedicated to the technology area in our company”, explains Paulo Medeiros, Industrial Manager of Printi. Specifically for labels, Printi has had a specific focus on this segment since 2017 with immense success. “Today, we have more than 350 products in our portfolio, including printed labels on different types of substrates”, explains Paulo. “And from the beginning, Durst technology was chosen as a partner.”

According to him, the first investment in a Tau 330E five years ago was based on the partnership that Durst, manufacturer of innovative digital printing systems and software solution, already has internationally with the Cimpress Group. However, now, with the second machine (scheduled to install in January 2022), the process has been different. “Durst and its structure in Brazil had a direct influence on the choice of brand and equipment for this new investment, which had the objective of meeting our growing demand. During the pandemic period, we had a 300% growth in our demand for labels and we were at our limit,” emphasizes Paulo.

After a selection of suppliers, three companies were analyzed in depth over six months. “Durst was once again chosen through its Tau 330 RSC technology”, he says. “The survey was based on the quality and productivity of the equipment, but what, finally, ended up surprising us positively was the operating cost, 21% lower and which will allow us to have a differentiated margin for adhesive products. In addition, the new technology of the Tau 330 RSC will allow us to gain speed, with 45% more productivity, and improve quality. The new print head technology allows printing in fine resolution with 2 picolitre dots, which was a very important evolution.”

For the industrial manager, the new Tau 330 RSC, as well as all of Printi's investments in printing technology and intelligence, renews the company's commitment to the principles that guided its creation nine years ago. “We work with state-of-the-art technology because we need to deliver high quality in the short term, offering our customers an efficient online platform to order their prints on various substrates. Durst's commercial and technical structure in Brazil was also fundamental to our decision, because, in addition to the productivity and quality of the equipment, we also have local, close support. With the minimum delivery period that we work with, we cannot have the machine stopped,” concludes Paulo.