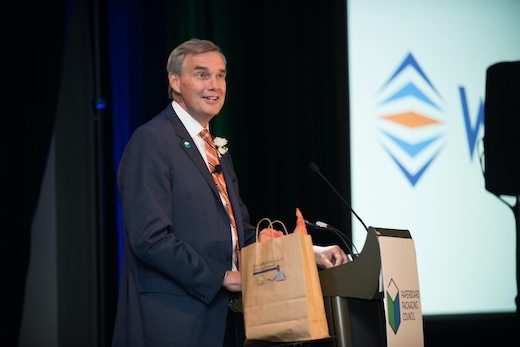 The Robert T. Gair Award — an homage to the man who paved the way for the modern paperboard packaging industry — recognizes exemplary individuals who have demonstrated a lifetime of significant and lasting contributions to the industry. With decades of knowledge and leadership under his belt, Voorhees was a natural recipient of this honor.

Under Voorhees’ leadership, WestRock, created as a result of the merger between Rock-Tenn and MeadWestvaco in 2015, succeeded in many areas. Voorhees was instrumental in expanding the company’s geographic presence facilitating 20 acquisitions during his tenure as chief executive officer. Voorhees served as CFO from 2000 until 2013, during which the company grew from $1.4 billion in sales to $10 billion. He was named CEO in 2013, and his efforts and leadership ultimately helped WestRock secure its status as the second largest packaging company in the U.S.

During his acceptance speech at PPC’s Fall Meeting, Voorhees explained his leadership philosophy. “Great leadership is based on commitment, knowledge, and support,” said Voorhees. “Not the ‘New Year’s resolution’ kind of faux commitment, but the deep commitment to something where you’re doing that [as] opposed to something you’d rather be doing. Knowledge, meaning the foresight to do something efficiently and then effectively. And lastly, support, by giving feedback to others when others don’t necessarily want to give it.”

Voorhees said it was the teamwork of all employees that made his time at WestRock both worthwhile and successful. “Design, marketing, sales, operations would not be standing without the commitment, knowledge, and support of our team. I hope that I’ve given a small portion of all that you’ve given me, because I’ve been given so much,” he said, adding, “You can’t be successful without the support of others.”

WestRock Chairman John Luke reflected on Voorhees’ ability to lead with both humanity and kindness. Luke said, “Steve is a wonderful leader, incredibly bright, but even more important to me was that he was a wonderful person, extremely humble, an excellent listener. He truly cares deeply about his people and the entire organization, and those attributes led Steve, as CEO, to make transformative change in our culture.”

“I congratulate Mr. Voorhees on his significant accomplishment. PPC has only given 19 Gair Awards during its 92-year history,” said Ben Markens, PPC President. “Only the most committed and exemplary individuals can receive the honor, and without a doubt, Mr. Voorhees fits the bill.”