Takin’ It to the Streets: Eye-Catching Window Graphics Enhance University of Akron School of Law Centennial 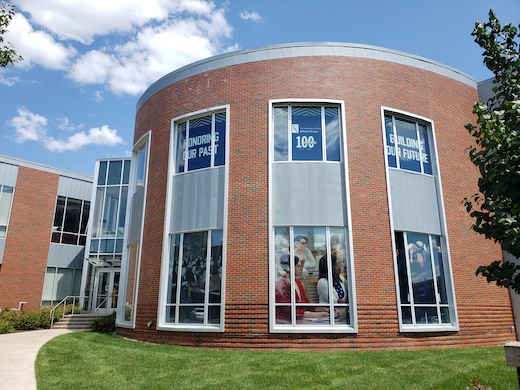 Centennial window graphics also wrap around the McDowell Law Center’s Brennan Courtroom wing on the southwest side of the building.

AKRON, Ohio - In September 1921, the Akron Law School welcomed its first class of 30 part-time evening students to a modest three-story building that it shared with other tenants. Over the succeeding 100 years, the school – now The University of Akron School of Law – evolved into a highly regarded institution that has provided talented leaders for law firms, businesses, courts and communities in Akron, the state of Ohio, and across the country.

So, when it came time to celebrate its centennial, the law school wanted to get the word out. One effective way it came up with was eye-catching window graphics on both sides of the well-traveled corner where the law school stands. The two installations combined cover 782 sq. ft.

The graphics were designed in-house by the University’s Communications and Marketing Department. The department’s vendor, large-format printer JW Color, recommended Briteline 80/20 Window Perf film for the side of the building where the film needed to be see-through from the inside.

For the other side, where the graphics would be installed on the first and second levels rotunda windows and the inside view wasn’t a concern, JW Color recommended Briteline 80/20 Window Perf.
“We chose GlassApeel for the rotunda windows due to its excellent optical clarity and the ability to reverse print and install from the inside to avoid renting a lift if we installed on the outside of the window,” said JW Color’s president, Craig Johnson. “We used the Briteline 80/20 Window perf on the other windows for its excellent printability and clean removal when it’s time to take the graphics down.”

All the graphics were printed on a swissQprint Impala 3 UV printer. Johnson and his team completed the installation in a single day.

“The window graphics have been a wonderful addition to our year-long centennial campaign,” said Akron Law dean, Christopher J. (C.J.) Peters. “The windows are attention-getting and really take advantage of our corner location that hundreds of vehicles pass by each day.”