Worzalla Thanks Students for Naming its Printing Press ‘Polar Ex-Press’ 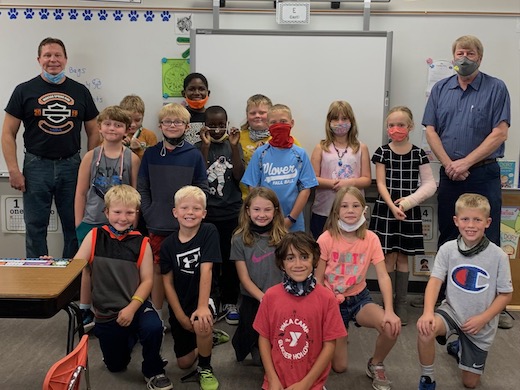 Stevens Point, Wisconsin – Worzalla, an employee-owned company specializing in printing high-quality children’s books, movie tie-in books and cookbooks, was able to celebrate Teresa Jessee’s 2020 first grade class at Washington Elementary for winning its Name That Press Competition. Worzalla announced in April 2020 that Jessee’s class had won the popular vote with its submission ‘Polar Ex-Press’. With in-person schooling interrupted by the pandemic, Worzalla was not able to properly celebrate the class’s victory. Now third graders, the students were finally able to gather for a pizza party lunch from Worzalla, where they were also shown a virtual tour of the press that they had named.

“We feel so fortunate to finally be able to thank Ms. Jessee’s students who came up with the most popular name in our Name That Press competition,” said Brianne Petruzalek, Vice President of Human Resources at Worzalla.

Worzalla’s celebration event coincided with National Manufacturing Day on October 1, an annual day of recognition held on the first Friday in October. The day is intended to showcase and demonstrate what modern manufacturing entails.

“We really appreciate any opportunity to talk to students and young people about all that we do at Worzalla. Many are surprised to find out how large our printing presses are and all of the technical work that goes into the modern manufacturing of a book,” added Petruzalek.

Worzalla received more than 50 entries in the Name That Press competition from classrooms around the community as well as from associates who work at the company. More than 1,600 votes were cast from community members to select The Polar Ex-Press as the winning name from a group of three finalists. The pandemic halted plans of Worzalla giving the students an in-person celebration and tour of the press, so Worzalla instead awarded Jessee’s classroom with a $250 donation for school supplies. A $100 donation was also awarded to the runner-up classroom. Students also previously received goody-filled bags with items from Worzalla and Heidelberg, the maker of the printing press.

At the time of the Name That Press competition, Worzalla was in the process of executing a modernization and expansion plan that added 50,000 square feet to Worzalla’s manufacturing headquarters, upgraded equipment, and hired additional associates. One of the equipment upgrades was the addition of a new Heidelberg 106 press that prints pages and covers of custom books of varying sizes, shapes, and colors. This press has been known as The Polar Ex-Press since the conclusion of the Name That Press competition in April 2020.