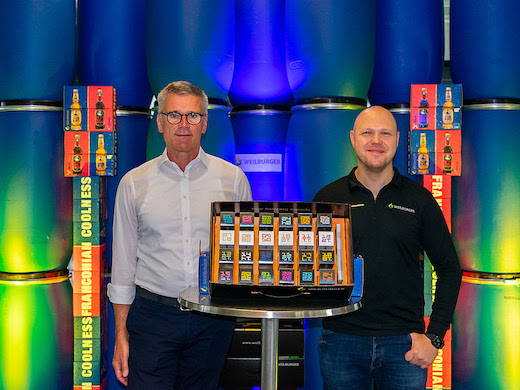 Gerhardshofen – WEILBURGER Graphics GmbH, an internationally operating manufacturer of coatings, flexo inks and adhesives for the graphic arts industry based in Gerhardshofen, Germany, hosted its traditional and popular "Franconian Lacquer Specialties" virtually for the first time this year from 15 - 22 June.

After the 2019 event was cancelled in favour of the company's 140 YEARS anniversary celebration and was not allowed to take place last year due to the pandemic, the company decided to host the Lacquer Specialties online for the first time this year. And with 110 visitors from 31 countries attending the total of 7 event dates (4 x German; 3 x English), the first virtual hosting can also be considered a complete success.

Arno Dürr, Sales Manager of WEILBURGER Graphics GmbH, and Bastian Pinsenschaum, Head of Technical Service, guided the participants through the programme in about ninety minutes per event. After a presentation of the company with current figures, comprehensive information on environmental protection aspects and measures taken for climate protection, Arno Dürr also officially announced the company's renewed investment measures in the Gerhardshofen site as part of these presentations. In line with the highly successful plant renewal in the dispersion coatings sector, the company has now consequently also commissioned the new construction of the UV production plant and will put it into operation before the end of this year. As a result, WEILBURGER Graphics GmbH will be producing dispersion coatings and adhesives as well as UV lacquers on two of the most modern production lines in the world from this year onwards.

As a further highlight, Bastian Pinsenschaum presented the FRANCONIAN COOLNESS beverage cooler, which was already produced last year and is based on the new barrier coating SENOLITH® WB BARRIER COATING FP PLUS 350025, which has now also received certification for direct food contact. This means that it can also be used as an environmentally friendly substitute for PE coatings for frozen products, for example. As the final highlight, Bastian Pinsenschaum then presented the newly produced WEILBURGER Graphics sample box, which contains a total of 24 folding boxes produced in offset with a selection of the company's most important finishing varnishes, as well as the newly launched SENOSCREEN® lacquer sample book with 30 selected screen printing lacquers. The box itself, as well as the inlay required to hold the samples, has been produced using direct corrugated printing using the company's high quality SENOFLEX® WB ink series. Further information on the new sample box, the associated tutorials, a new augmented reality app for this project and possible sources of supply will be announced by the company shortly.

Arno Dürr on the event: "Of course, in the run-up to this first virtual "Franconian Lacquer Specialties", we did not know whether our traditional event would also work online and be accepted by our customers and business partners. But we also did not want to do without this valuable annual event for another year, which has established itself as an excellent communication tool for our customers and partners as well as for ourselves. Of course, it is all the more gratifying for us to note that our virtual offer was also excellently received. In order to enable the intimate togetherness and direct dialogue with our participants also virtually, we had deliberately opted for a smaller number of participants per event and therefore more event dates. This also worked excellently and was surprisingly well received by our participants."

Bastian Pinsenschaum added: "It was a nice experience for us and we received exclusively positive feedback for our online orientation of our "Franconian Lacquer Specialties". And yet, to be honest, we can't wait to organise the next version, which will then be the 15th edition, as a regular face-to-face event again. On the one hand, our products naturally live from touching and examining them. Haptics and optics, but also smell and sometimes even acoustics play an enormous role, which simply cannot be conveyed online. On the other hand, this event has been promoting togetherness for over a decade. These interpersonal relationships and interactions cannot yet be depicted online – and perhaps never will be – but in the end they are enormously important from our point of view for a trusting and functioning customer relationship. We therefore hope to be able to invite our customers, business partners, friends and companions to Gerhardshofen again nex t year."