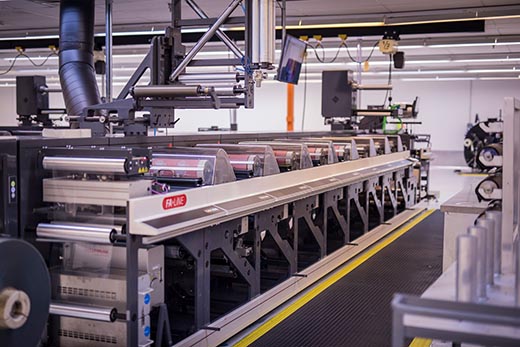 The team at Catapult has been working with Bellissima since launching the business in 2018. As part of its ongoing due diligence, Catapult evaluated other screening technologies available in the market to see if they could match their results but found that nothing could rival Bellissima.

Commenting on the contract extension, Mark Cook, CEO of Catapult, said: "Since discovering Bellissima, we have been impressed with its superior Ultra HD print results, cost savings, and environmental benefits. We decided to go 100% Bellissima from day one, and we haven't looked back.
Entering the US market in 2018, we had an ambitious plan to redefine and elevate print quality standards – to truly disrupt the marketplace. Bellissima has given us a unique advantage to demonstrate a visual 'wow factor' with flexo, delivering product at a lower price and with shorter lead times than the competition. Catapult's remarkable growth – from a start-up to a 20-million-dollar business in just three years – is attributable to our investment in Bellissima."

"Catapult prides itself on combining creative expertise, leading-edge technology, collaboration, and a strong passion for delivering on customers' needs. We were unable to find a product that rivaled Bellissima's capabilities - this reaffirmed our confidence in committing to the next three years with this technology. We have plans for major growth and are excited about our future and look forward to working with Hamillroad on this journey," concludes Mark.

"Catapult's continued success using LUX ITP 60 plates processed on our LAVA thermal system with Hamillroad's Bellissima is incredible," stated Ryan Vest, Director of Innovation at MacDermid Graphics Solutions. He continued, "From the start, we knew we had a winning combination to achieve consistent, repeatable dots and faithfully reproduce image contrast and fine details to represent the original continuous tone image."

Pierre Hammond, Commercial Director for Hamillroad, commented, "Securing the three-year renewal contract is a milestone for Bellissima and testament to how Bellissima contributes to direct business growth for companies. We're excited to be on board with Catapult to take flexo's capacity further and explore new horizons with Bellissima."

If you are a printer wishing to try Bellissima on press, please visit the Bellissima Network page on the Hamillroad website: www.hamillroad.com/the-bellissima-network/

We are growing our Bellissima Network in countries where we do not have a trade shop member. If you are interested in supplying Bellissima DMS as part of your flexographic printing business, please get in touch via email: [email protected] or complete the form online: www.hamillroad.com/bellissima-resellers/