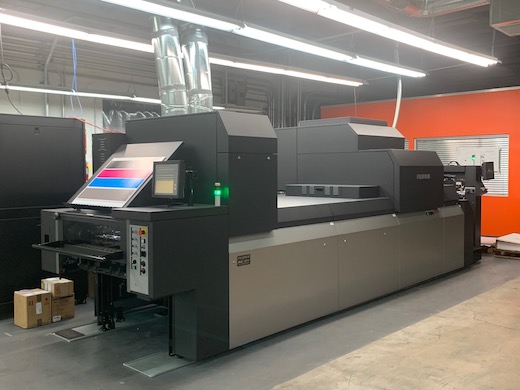 Hanover Park, Ill. – FUJIFILM North America Corporation, Graphic Systems Division is pleased to announce the installation of its Fujifilm J Press 750S at NuPress, a Miami-based diversified and leading print provider of marketing essentials, menus, packaging, banners, signs and more. The new addition of the J Press 750S has enabled the company to set itself apart from the competition by providing advanced capabilities and efficiencies, while continuing to deliver high quality prints.

“In the age of COVID, we have seen a significant change in what customers want,” said Ricky De La Vega, owner of NuPress. “Cost efficient, shorter runs are becoming the norm; no one wants excess inventory sitting around or going to waste. Our J Press 750S has allowed us to easily accommodate these shorter runs while exceeding the quality we were getting from our offset presses.”

The addition of the J Press 750S empowered NuPress’ ability to do shorter runs, including specialty packaging jobs, and significantly increase its overall output efficiency. As an example, a longstanding customer recently challenged NuPress with a new job with the goal of test-marketing a new product. The test-market job required only 100 pieces of each version but there are 58 different versions to produce – and each containing Pantone colors. With a conventional press, this job would take a countless amount of time at an excessive cost. With the J Press, 750S because of its extensive color gamut and productivity efficiencies, NuPress was able to produce this job for their customer in time measured in minutes, not hours, and the color match was spot on.

“This has been a game changer,” said De La Vega. “This added efficiency and combined with the overall versatility and range of capabilities of the J Press, we were able to be extra-competitive in bidding on and quoting jobs for customers, many times helping us earn the business over our competition.”

When it comes to finishing work, another advantage NuPress has discovered with its J Press 750S is that it produces output that is offset in nature. “The inks dry like offset inks, they don’t create a shiny surface like other inks or toners do,” said De La Vega. “This has a direct impact on how the print is finished. With other technologies, print buyers are accustomed to paying for a secondary coating to be applied to make the output more offset like. This isn’t at all necessary with the J Press 750S bringing added efficiency, quality, and cost savings directly to my customers. It’s very much a seamless integration from prepress to the pressroom.” The output is of such high quality that many times De La Vega will use the J Press 750S to output finished proofs of the job for his customers – an impossibility for a traditional offset press.

Leveraging the core technologies of the esteemed J Press 720S, the J Press 750S raises the bar by adopting Fujifilm’s latest quality, productivity and environmental enhancements. The J Press 750S features industry leading FUJIFILM Dimatix Samba® print heads along with a 6-up letter size imposition and increased speed, delivering double the sellable output over the previous version. This is all accomplished while reducing the overall footprint by 15 percent and reducing energy consumption by 23 percent.

“In an increasingly competitive industry, we were looking for technology that would enable us to continue to grow our business,” said De La Vega. “NuPress has been a Fujifilm customer for over 24 years. That’s because Fujifilm is focused on helping businesses like ours become more profitable and sustainable, and that’s exactly why we invested in the J Press 750S.”