Yuma Sun Taking Workflow Efficiency to the Max with NewsWayX

Princeton, N.J. – Horizon Publications’ Yuma (Arizona) Sun has a long history with ProImage. The publisher has been managing all of its local newspapers and editions with NewsWay workflow software since 2005.

At that time, the paper was owned by newspaper conglomerate Freedom Communications. The paper is now part of Horizon’s Rhode Island Suburban Newspaper Group.

The Sun has made various NewsWay upgrades over the past 15 years, in order to accommodate edition planning, tracking pages, load balancing RIPs, page impositioning, softproofing plates, adjusting images for fan-out, and managing output to their two CTP devices.

“When Freedom converted its newspapers to CTP, we implemented NewsWay Lite,” said Director of Operations David Fornof. “We ran that for as long as we could. When it was time for an upgrade we stayed with NewsWay — and I am really happy we did.”

In 2018, the Sun transitioned to NewsWayX, ProImage’s next-generation newspaper production workflow. It also added Pitstop Server for preflighting PDF pages in order to reduce errors. Based on HTML-5, NewsWayX offers a single user interface for increased transparency into edition planning and status.

“NewsWayX has a lot of bells and whistles and we have added lots of options,” Fornof said.

Capitalizing on NewsWayX’s remote capabilities
That functionality prompted Horizon to add remote workflow management for its California papers — the Santa Maria Times, the Appeal Democrat in Marysville, and the Antelope Valley Press in Palmdale — as well as the Sun Chronicle in Attleboro, Massachusetts.

Each site accesses Yuma’s centralized NewsWayX system through a secure log in. Production staff at each paper can view and manage their own pages and plates, thereby eliminating the need for local servers at these locations.

“If they have a press we consider it a site, and then each of those sites also have multiple locations that send pages to them,” Fornof said. “We now have five different presses across the country from East Coast to West Coast that use our servers.”

Pages for each publication are uploaded, RIPped, imposed, and soft-proofed using Yuma’s systems. Each publication approves its own plates and TIFF files are sent to their local CTP units for output.

“These can be tailored to whatever these papers’ needs are,” Fornof said. “Some locations have remote access to release pages themselves, and some send pages to our site and we release them.”

Streamlining image toning & maximizing ink savings
In late 2020, the Sun added ProImage’s OnColor image-toning software and OnColor ECO ink optimization for all of its sites. OnColor automates both processes to improve images coming in from a variety of sources and file types, while increasing throughput and reducing ink consumption.

OnColor’s “smart” features improve images, while increasing throughput. The software is built on multi-dimensional technology that automates the analysis of tonal, color and spatial characteristics in every image. It then calculates and applies the necessary corrections for optimum reproduction.

“The photo toning and ink optimization have been a welcome addition to our other technologies as they have Improves quality and reduces production costs,” Fornof said.

“When a page comes in, there are multiple paths for it to go through,” Fornof said. “Now, once pages are released, we have also automated the process of uploading PDFs to our digital edition partners.”

Fornof said the benefits of the longstanding ProImage partnership have been significant and allowed the publisher to grow its capabilities as the technology advances.

“ProImage is an easy group of people to work with,” he said. “I just can’t say enough that they really understand the newspaper world.”

The vendor’s keen understanding of the demands of producing newspapers has been instrumental in the Sun’s ability to maximize the benefits of its centralized workflow system.

“They respect that their products are being used until 3 a.m. or 4 a.m.,” Fornof added. “Whenever we have a problem, we have a call within 15 minutes — even at zero dark thirty.” 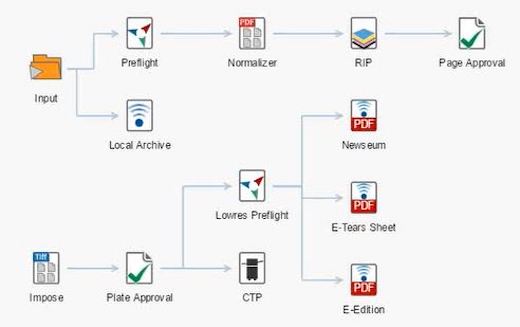