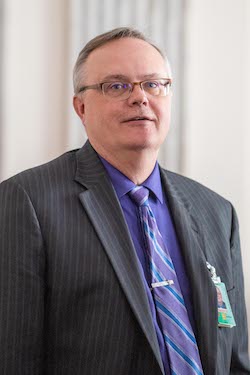 Washington – The U.S. Government Publishing Office (GPO) Managing Director of Official Journals of Government and Acting Chief Administrative Officer Lyle L. Green has retired after 30 years at the agency. Green started as a proofreader of Congressional documents and went on to being part of and eventually overseeing high profile jobs for Congress and the White House, including the President’s Federal Budget every year, the inaugural materials every four years, and all special programs for Congress.

“I first got to know Lyle’s great work and commitment to Congress while I was working on Capitol Hill,” said GPO Director Hugh Nathanial Halpern. “Lyle was the person you called when you needed help getting your committee report or bill printed. Since I joined GPO, Lyle’s knowledge and advice has only become more critical. He has been a long-standing asset to GPO. His unparalleled leadership, knowledge of GPO operations, and counsel will be greatly missed. A big thanks goes to Lyle for his 30 years of service at our agency. I wish him all the best in his retirement.”

As the Managing Director of Official Journals, Green oversaw GPO’s Official Journals of Government business unit. This unit includes the Office of Congressional Publishing Services, which serves as the liaison for print and electronic product requests between GPO and Congress; the Office of the Federal Register (OFR) Publishing Services, which supports and monitors the administrative and production requirements for all official OFR documents produced by the GPO; and the Congressional Record Index Office, which is responsible for creating an index to the congressional proceedings, bills and resolutions, floor statements, submitted remarks, and all supporting documents that appear in the Congressional Record. Green also oversaw GPO’s Continuity of Operations (COOP) plans.

On April 1, 2019, Green assumed the role of Acting Chief Administrative Officer. In this capacity, he was responsible for GPO’s Human Capital, Information Technology and Systems, Acquisitions and Administrative Support business units.

Green became Managing Director of Official Journals of Government in January 2012. Previously, he served as the Director of the Office of Congressional Publishing Services for five years. In that role he worked closely with the Clerk of the House and the Secretary of the Senate to meet the information dissemination needs of Congress. Under Green’s leadership, GPO produced the official materials for the past four presidential inaugurations in 2009, 2013, 2017, and 2021. He oversaw the production of essential Congressional work when Washington, D.C. experienced two blizzards in 2010, an earthquake in 2011, and most recently, the coronavirus (COVID-19) pandemic.

He spent about 15 years in various positions in Congressional Publishing Services prior to becoming director. Green was part of the GPO team in the 1990s that changed the format of viewing and accessing Congressional documents online, making it easier for the public to access and use Congressional information. Green joined GPO in 1991 as a printer proofreader. Prior to coming GPO, Green spent a decade working as an editor for various publications at associations and private sector companies.

Green received his Bachelor of Arts from the University of Maryland in College Park.