Kennesaw, Ga. – Looking to expand into the packaging space, West Press, an employee-owned, full service commercial printer located in Tucson, AZ, installed a new Speedmaster XL 75-5+L with Push-to-Stop and UV LE Technology from Heidelberg. Since installation a little less than a year ago, West Press has experienced drastic improvements in its overall throughput and efficiency.

“This technology has saved us hours, even days”

West Press, who takes pride in continuously investing in its employees, technology, and customers’ welfare, wanted a machine that would bring new ideas and business opportunities for its sales team and its customers. Previously only equipped with conventional equipment, West Press is now able to print on a wider gamut of substrates and can get jobs from the press to postpress faster thanks to the addition of LE UV technology on the new XL 75. According to President, Kristy Scharf, “With our older press, we had one particular job on plastic that would take us a full week to run. With the new press, it’s now in the finishing department within 5 hours. The time savings is incredible!”

In addition to running synthetics faster and more efficiently, West Press is also able to better handle uncoated jobs with the LE UV technology and has significantly decreased its makeready times from 30 minutes to 5 minutes. This is due to advanced features on the press like Heidelberg’s Push-to-Stop autonomous manufacturing approach – driven by Intellistart, a unique integrated software system that greatly reduces the number of operating steps during a job change, and AutoPlate Pro, a fully automatic plate change system that controls precise plate feeding for exact and fast registration at the start of each job.

“We run a lot of signature work with many changeovers, so the Push-to-Stop technology has been tremendous for us. The press does so many things on its own – plates up, plate down, automatically setting the guides, washing the blankets – and then you’re running again. This technology has saved us hours, even days, on some of our larger jobs,” said Scharf.

In an effort to improve and track its impressive productivity advancements, West Press is also signed up for Heidelberg Assistant with Performance Data and Online Advisement. The service just went online at the end of 2020, but the online portal will provide easy-to-understand production data and metrics that will aid West Press in its business decision-making processes in the future and track improvements to the print shop’s Overall Equipment Effectiveness.

“No press better than a Heidelberg”

A firm believer in the mantra, “If you take care of your employees, they will take care of the customers,” West Press looked no further than its press operators when seeking advice on making the investment in the XL 75. “Our pressmen have run other presses in the past and know the competition. They say there is no press better than a Heidelberg,” said Scharf. When making the change from an older Speedmaster SM 74 to the advanced technology of the Push-to-Stop XL 75, the press operators at West Press got up to speed quickly thanks to the “over the top, perfect” training from Heidelberg’s SystemService team.

To keep up with the new technology advancements of the press and optimize its workflow from prepress to press to postpress, West Press also made the decision to upgrade to Prinect Production Manager and purchase a second Suprasetter CtP device. Through the Production Manager subscription model, West Press receives technical support for all fixes and upgrades, so it is always up-to-date on the latest versions and newest Prinect modules as they are developed. The new workflow has aided the company in getting files from preflighting to press much faster. Additionally, the XL 75 exclusively runs Heidelberg Saphira Consumables, which ensures the press achieves the highest quality possible.

Established in 1991 by Joel M. Levine, West Press is a state-of-the-art print and marketing communications provider known for helping clients grow their businesses. As an employee-owned company, West Press puts the most knowledgeable and experienced professionals to work for its customers. The company serves customers nationwide and is pleased to have won industry awards for the quality of its printing and design for the past several years. 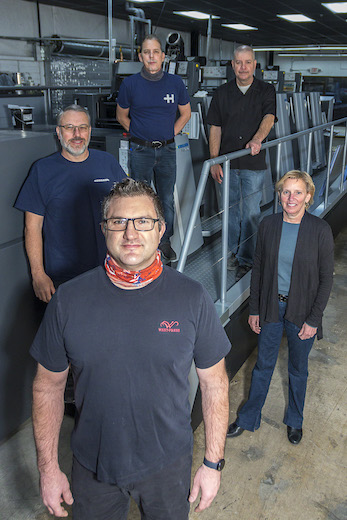