Brixen, Italy – A world-famous painting reworked by celebrated Spanish photographer and artist José Manuel Ballester and printed by Durst is the star attraction at a special exhibition. For the first time, a modified Guernica - originally painted by artist Pablo Picasso - has been printed full-size using advanced digital printing and production technologies from Durst.

Mr. Ballester has achieved international recognition for his special art of interpreting famous paintings by eliminating humans and animals. Guernica is a 1937 oil painting on canvas recognized as one of the best-known works of Picasso, who died in 1973. It is regarded by many art critics as one of the most moving and powerful anti-war paintings in history.

Mr. Ballester’s work, “Around Guernica, 2009/2020”, is an emptied version of Picasso’s painting that conveys an updated look at the historical event and human tragedy. It is now a centerpiece at the exhibition, “2020/03/15 José Manuel Ballester”, in the Guggenheim Museum Bilbao, showing Bilbao city during the lockdown. The exhibition, which also includes a selection of large-format photographs that reflect Bilbao’s deserted streets and spaces, is open until 21 February 2021.

With "Around Guernica", Ballester adds a new artwork to the project that began more than 10 years ago, when he decided to investigate the architectural and natural spaces that surround the stories of some of the most important works in history, such as "The Meninas" or "The Garden of Earthly Delights". During the lockdown last spring, the artist received special permission to move around the deserted city of Bilbao and capture incredible landscapes and images never seen before.

These images were the first step of a project in collaboration with Estudios Durero and the Guggenheim Museum Bilbao, which culminated in a photographic exhibition, publication of a book, and the first reproduction and exhibition of "Around Guernica" to the public. In this way, Ballester adds an artwork to the Hidden Spaces project, which includes some of the transcendental and universal themes for the human being. Along with his proposal "May 3, 2008", "Around Guernica, 2009/2020" addresses the nonsense of human violence and wars, but on this occasion, Ballester maintains a "living" element: the flower that was already shown in the original painting, and it symbolizes hope, also for these difficult times that we have had to live.

In this context, The Guggenheim Museum Bilbao approached long-standing Durst customer Estudios Durero, a company that “imagines, creates and develops new forms of graphic production”, to print the reworked Picasso on a unique, hand-woven linen material with special white coating supplied by the museum, especially for the assignment. It had a total dimension of 3.5 x 7.8 meters.

Estudios Durero and Mr. Ballester spent a day in the Customer Experience Center at the Durst headquarters in Brixen, Italy, with the goal to print the Picasso Guernica interpretation on a Durst Rho 512 six-color machine. And they only had one chance – the available material was sufficient for only one print run, which meant no test print on the final material was possible.

"It has been a true honor for us and for Durst to develop this special project together with José Manuel Ballester and the Guggenheim Museum Bilbao," said the owner of Estudios Durero, Ander Soriano. “No other company could have done it. In Picasso's original work and in Ballester's reinterpretation, the painting only uses a very wide range of grays and a very high resolution in all its shades, so the print quality must be exceptionally high to offer a true value to its reproduction. And that would have been impossible without the Durst Rho 512 6 C .”

With reference to Durst, Mr. Ballester said: “In order to launch this project, in this context, we have had many collaborators. Having the best technology to make this possible was a privilege.”

Rafael Carbonell, Managing Director, Durst Iberica, said: “Estudios Durero has been a loyal customer and it was a real honor for Durst to support the Guggenheim Museum Bilbao in this special project. When you are printing only black, gray, and white the quality needs to be exceptionally high to give arts its true value.”

Christian Harder, Durst Group’s Head of Graphics, said: “In conjunction with Durst Iberica, we were extremely proud and delighted to welcome Mr. Ballester and Mr. Soriano to our global headquarters where they were able to witness first hand our world-class facilities and technology. The unique linen materials were specially prepared for this art print. In reality that meant one chance, no test printing. And the results speak for themselves. The visitors to the museum exhibition have been amazed at the outstanding print quality.” 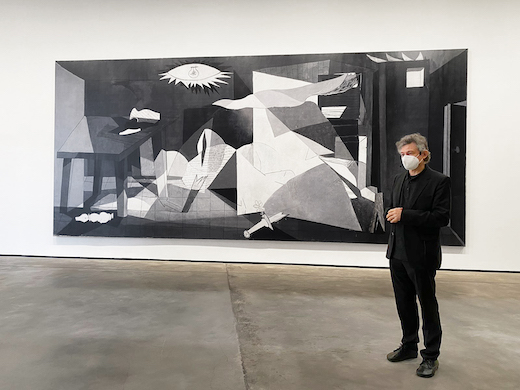 José Manuel Ballester with the reworked Picasso Guernica printed by Durst to give ‘true arts value’.