CMYUK, Shrewsbury – When Wolves fans raised money for a giant ‘Get Well Soon’ banner for prolific striker Raúl Jiménez who sustained a head injury during a recent win at Arsenal, they also set a world first.

The giant banner printed by DIS Graphics marks the first installation of Kavalan Spiderweb PVC-free mesh banner at a football stadium anywhere in the world, propelling the Wolverhampton Wanderer’s Molineux Stadium to the top of the sustainability league.

The banner was initially the idea of fan Kieran Newey, who after gaining the club’s blessing, set about crowd-funding a supersized graphic with an aim to raise £7,500. His #9forRJ9 on-line campaign also invited fans to upload their own designs for the banner.

Twenty-seven entries were received, with Louise Cobbold (louisecobbold.com) – the artist behind many of Wolves’ official matchday programme covers – chosen as the winner for her stunning artwork via an online poll.

DIS Graphics, the Wolverhampton-based digital print, sign and graphics specialist that has been the club’s official partner since July 2019, printed the banner at cost on its EFI VUTEk h5 printer using UV inks.

Measuring 45m x 11m, the Kavalan Spiderweb mesh banner was installed in the upper tier of the Steve Bull stand in the Molineux Stadium for the closed Premier League meeting with Aston Villa on Saturday 12th December.

Exclusively available from CMYUK, Kavalan Spiderweb PVC-free mesh has the same look, feel and strength performance of a traditional PVC mesh banner but with none of the eco-malignance.

Dave Purcell, Sales Director, DIS Group said, “Being very close to the Wolves’ family, we really understand the concern for Raúl, which we share. It’s early days yet, but according to the Club he is doing well.

“As a print service provider, we want to ensure we can offer suitable sustainable materials to all our clients. Kavalan Spiderweb mesh delivers on eco-responsibility and performance. It ticks all the boxes, and makes a compelling case for all sporting fixtures and outdoor events to confidently switch to a green alternative.”

Charlotte Johnson, head of marketing at Wolves said, “We are very proud to be the first football club in the world to install this sustainable PVC-free banner material.”

Damien Clarke, Sales Director (Materials) CMYUK said, “We all wish Raúl a complete and speedy recovery. We’re delighted that PVC-free Kavalan Spiderweb mesh was the medium for his ‘Get Well’ message. This material is a game-changer that provides a truly viable green alternative to traditional PVC. It’s a top-rate innovative product for a world-class sensational player.”

In total fans have raised over £20k, and this money will be sent to a charity of Raúl’s choice. 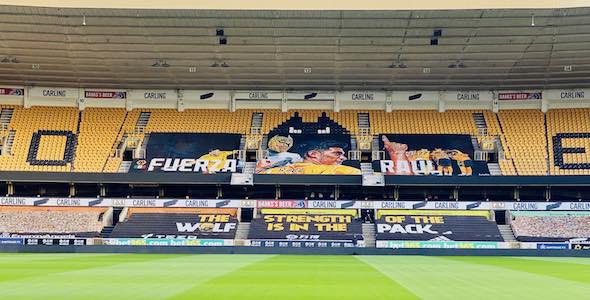