Solopress Announces a £3.3mil Capex Plan to Revamp its Manufacturing Base Through an Investment in HP T-Series Presses with Hunkeler Finishing as well as HP Indigo Presses

Solopress announces that it has put into operation a brand-new HP PageWide Web Press T250 HD, the first press of its kind in the world to be operating in a commercial environment.

The press makes use of the new “Brilliant” inks recently launched by HP, making it ideally suited for commercial print.

A second T250 machine is on order with an installation date for the company’s Southend site planned for early 2021.

Solopress is part of the ONLINEPRINTERS Group who are also partnering with HP to invest in high-speed, high-quality digital inkjet printing throughout the group.

For some time, Solopress had been observing the development of high-speed digital inkjet technology, recognising that the speed of production was desirable but the quality not quite up to the standard expected.

With the introduction of the T-series with its HDNA printheads, HP had made an important advance in high-speed digital inkjet printing. It was clear to Solopress MD Simon Cooper that the product had now reached the maturity level required, with the quality of production necessary, to be introduced into a commercial printing environment

“We started assessing the market for high speed continuous feed inkjet presses in October 2019, doing extensive due diligence to ensure that we made the right technology choice. Despite many good products on the market we concluded that with the upgrade on the T series press, it was the best choice for our business”

When the Corona crisis broadsided the business, the company needed to decide whether to push ahead with the bold investment plans, or shelve them in the face of suppressed demand. Ultimately, they took the brave decision to forge ahead.

According to Simon Cooper:

“In the end, we were able to turn this period of suppressed demand to our advantage. We took the opportunity to remove older equipment and move ahead with the installation of new technologies. With these investments we have fundamentally improved our business, making huge productivity gains!”

ONLINEPRINTERS Group, of which Solopress is a part, is partnering extensively with HP. In addition to the two?new?T250 machines for Solopress, ONLINEPRINTERS?Germany will also be taking delivery of two new T250s. Scandinavian?Print Group?already has a T240 operational taking the tally to five T Series machines within the group as a whole, offering Europe-wide coverage.

Solopress is predominantly a B2B printer serving the UK domestic market. The new investment aids them in the production of general commercial products such as flyers, leaflets, brochures and posters. The increased speed and capacity it brings allows Solopress to reduce turnaround times and manage far greater volumes of production.?

As well as improving the way Solopress serves existing markets, the HP technology opens up the opportunity to serve the publishing industry via HPs proprietary Piazza software. Publishers can make their content available for print via the software, which then identifies which printers operating the T-series machines have the capacity to run the job.

Fast digital print with low set-up costs is popular among publishers. It allows them to print little and often on demand, exposing themselves to less risk and achieving a lower stock holding. For printers like Solopress it’s a fresh market and a welcome revenue stream.

Always keen to be at the forefront of developments in the industry, Solopress is proud to be championing this technology. Simon Cooper is excited by the development of Solopress’ relationship with HP, and the technologies it opens up:

“Our partnership with HP allows us to access industry leading technologies like high-speed digital inkjet, Indigo and the?Siteflow?system all from the same source. Our decision to forge ahead with inkjet makes us leaner and better equipped to head into the future.” 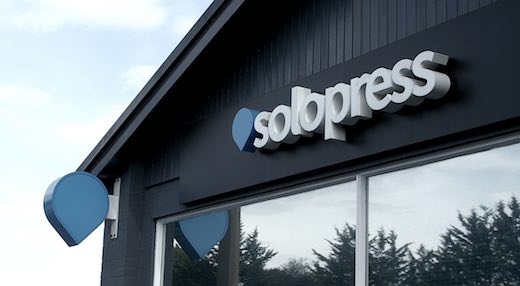