Introducing PVC-free Kavalan, a game-changing banner alternative for the sign and display industry – endorsed by both FIAB and Miller Weldmaster

CMYUK, Shrewsbury – CMYUK has signed a multi-million-pound exclusive contract with TAYA Groups to supply its Kavalan PVC-free banner range into the UK and Ireland.

Kavalan is set to become an industry game-changer that will seriously disrupt the traditional PVC banner market. Kavalan replicates the look and feel of PVC, has the strength of PVC, and welds like PVC but unlike traditional PVC it is specifically designed for responsible end–of–life–disposal.

Kavalan is phthalate-free and features a biodegradable coating. Also, it weighs up to 50% less than traditional PVC banner, which significantly reduces carbon emissions during transportation.

Tried, tested and approved
There has long been a call from the industry for a credible PVC replacement but until now nothing has been able to replicate the full advantages of it with the main sticking points being weld reliability and price.

However, Kavalan blows these issues out of the water coming into its own in terms of weld strength at an attractive price point. In tests carried out by leading global welding manufacturers FIAB and Miller Weldmaster, the results of tear strength and weldability tests were equal to, if not better than traditional PVC banner.

Bjorn Bora, CEO, FIAB said, ‘All industry players need to address environmental issues and to this end, we can truly recommend Kavalan as a unique solution. It is a non-PVC material with all the positive properties associated with traditional PVC banner in terms of quality and weldability but with environmental concerns at its core. Kavalan can be a real alternative for many customers and we are excited to be part of the next evolutionary step in the plastic welding industry.’

Rob van Dijken, EU BV Business Manager at Miller Weldmaster said, “The first time I laid eyes and hands on the Kavalan products, I found it hard to believe they were not PVC. When I welded the first samples, I noticed it welded like PVC. I like the material and can imagine it will be a big game-changer in the industry.”

Vincent Lin, Vice President TAYA Groups said, “When it comes to distribution we look for a close partnership that shares our philosophy. So when we met the CMYUK team, we were super impressed with its professionalism and dedication to the development of sustainable solutions.

“CMYUK’s fresh marketing approach, its comprehension of the technical aspects of a product, and its understanding of product positioning within a wider environmental context will make this a successful and solid partnership for years to come.”

Innovating for eco products
Kavalan is the brainchild of Vincent Lin, Vice President TAYA Groups. It has taken almost a decade to develop and currently has 13 patents pending.

TAYA is recognised as a long-standing global leader in the manufacture of traditional PVC coatings. Europe accounts for 80% of its revenue, 45% of which is traditional banner PVC.

The Kavalan range demonstrates Vincent’s vision and TAYA’s committed mindset to developing new environmentally responsible products that not only deliver on performance, quality, and price but which are manufactured with high emphasis on sustainable methods.

In 2018, approximately 340 million square meters of PVC banner was printed in Europe. Alarmingly, because banner PVC can’t be easily recycled, most of this ended up in landfills or was incinerated.

During incineration, when PVC is heated to high temperatures it emits hydrogen chloride, a dangerous colourless gas, which along with toxic dioxins are extremely damaging to air, water, and land ecosystems.

These chemicals are also highly corrosive and dangerous to human health. Despite significant improvements in filtration, there is substantial evidence that shows the operation and mishandling of even the latest MSW plants is leading to large scale, and unmonitored, release of toxic substances, and sub PM2.5 particles into the environment.

Prior to developing Kavalan, Vincent spent many years researching the true picture around current industry PVC banner recycling and found this solution to have serious flaws, which is why Kavalan has been designed for safe waste-to-energy conversion.

“Most people think recycling is the most eco-friendly option for waste, but what they don’t realise is that many plastic fibres, including PVC banner, are so degraded by a process dependent on massive quantities of solvents and other toxic chemicals, that they are often unusable and become waste, which is either incinerated or put into landfill,” said Vincent.

Kavalan can be disposed of without any harmful effects to health or the environment. Any emissions are hundreds of times lower than that of traditional PVC banner and well below the minimum EU safety level guidelines. Kavalan adheres to strict ecological standards and is REACH, RoHS, and 33P compliant, and if in a worst-case scenario it does end up in landfill, it has a water-based, light biodegradable coating that decomposes.

In addition, printers don’t have to change any of their working processes or equipment. Not surprisingly, Kavalan does everything that PVC does, if not more, but in a cleaner and greener way.

“As a new generation of manager, sustainability is a central responsibility for me. It’s not just about making money, it’s about figuring out what you can do better for the environment within this industry. The market rightly wants change and TAYA is committed to delivering it,’ said Vincent.

Robin East, Group Director at CMYUK said, “We are delighted to be working with TAYA to introduce and develop the Kavalan PVC-free range of materials into the UK and Ireland. It completely matches our mandate to offer the UK’s digital wide-format printing industry a wide variety of environmentally responsible materials.

‘We are thoroughly impressed by the way TAYA has taken its considerable experience in the manufacture of traditional PVC, leveraging that knowledge into developing Kavalan – a process that has taken the best part of a decade. The result is a revolutionary substitute that is stronger and lighter than traditional PVC and a game-changer for the environment.

“We congratulate TAYA in its onward commitment to developing new eco products. The industry has been crying out for a banner PVC material replacement, and with Kavalan, TAYA has delivered a product that exceeds.” 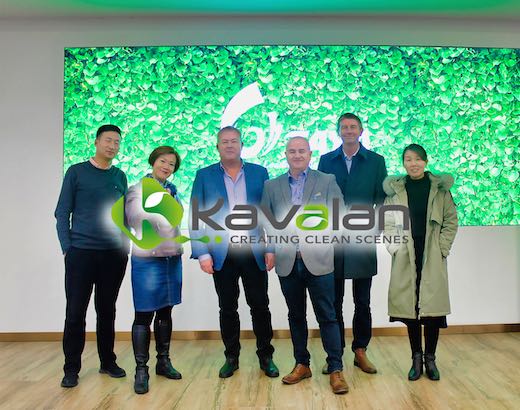