Finewebtech of South Korea has seen a 20% increase in production capacity following the installation of their new Nilpeter FA-17. The company has already signed on for two additional Nilpeter FA-Line presses to further expand and streamline the business.

Finewebtech was founded in 1987 in the South Korean capital of Seoul. The award winning label and flexible packaging printer primarily deals in cosmetics, household items, foods, pharmaceuticals, and more. After a comprehensive market search, Finewebtech decided to go with the Nilpeter FA-17 midst 2019, which decorated the first All New Nilpeter FA-line installation in the country. According to Erik Blankenstein, Sales Director Nilpeter Asia-Pacific; Nilpeter’s local representation by SCREEN Korea and in particular Mr. Johnny Lee, GA Company & Marketing Director, has played an important role in the Korean market development and business relationship with Finewebtech. The first press was installed in August 2019.

“For example, having the option to put Rotary Screen on the rail, with its own dedicated UV lamp system, has cut down our preparation time by at least 20% and increased our production capacity by more than 20%. With this, our 9-colour press is working as a 13-colour press as we do not have to compromise print stations to do rotary screen. The ability to put most of the embellishment options on the rail has given our production team the confidence to quote customers with shorter lead times,” he adds.

”We have many different flexo press brands in-house, and I have to say, the machine downtime on the Nilpeter press is incomparable. And we’ve experienced nothing but quick response times and solutions from the Nilpeter team. When faced with complicated new jobs, the Nilpeter application team is always of great help,” he continues..

Two Additional Nilpeter Presses on the Books
“We have just signed off on our 2nd & 3rd Nilpeter All New FA presses and we are looking forward to further expanding and streamlining our business. We feel very confident that the level of automation, efficiency and flexibility that our additional two FA-lines will bring, will allow us to make this happen,” Mr. Jang Tae-Soo, President & CEO, Finewebtech Label Solution System concludes. 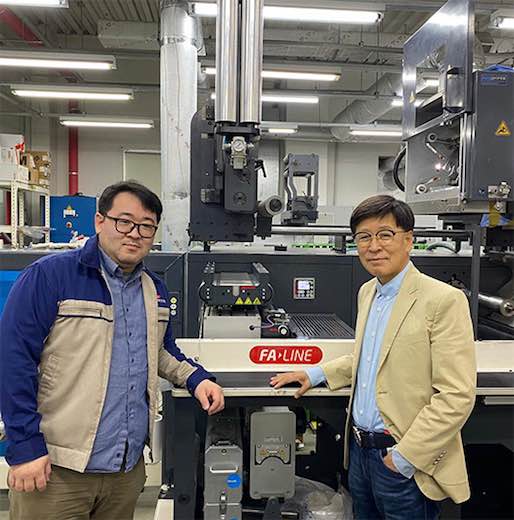