In 2010, there were a total of 57,674 employees in U.S. screen printing establishments (NAICS 323113). By 2016, screen printing employment had grown to 63,056—the opposite of what we have seen in general commercial printing during that same period. 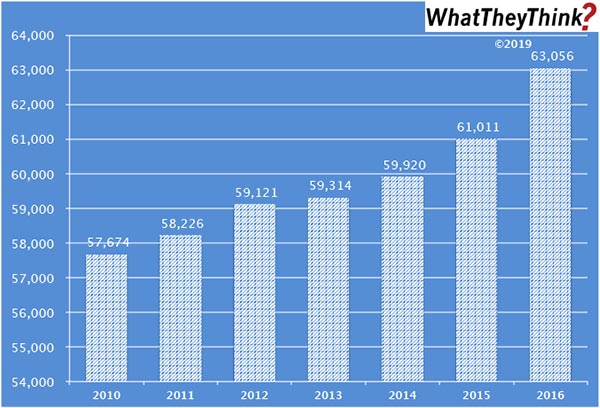 Last month in our industry “slice and dice” data series, we began looking at historical employment in the various printing industry segments.

This week, we look at screen printing employment, the trend of which is the opposite of what we have seen in general commercial printing: it has been growing.

As we said in our commentary on screen printing establishments, this is due to the growth of specialty printing—be it textiles (T-shirts, hoodies, spiritwear, etc.), 3D objects (smartphone cases, drinkware, sports items, etc.), and the like—as these kinds of items have started to proliferate in the past decade. Digital inkjet printing technologies like UV and dye-sublimation can now handle the short-run component of specialty printing, but a lot of it remains the purview of screen, as well as pad printing, screen’s sibling process. It’s not uncommon to find hybrid screen/digital shops. There is also the emergence and growth of industrial printing, which as we have commented ad nauseam is merging with commercial and specialty printing, and screen as well as digital printing are heavily used in those kinds of applications.

Last year, we began highlighting data from our Commercial Printing Establishments, which complements and supplements our regular tracking of printing industry shipments and other industry data. These counts are based on data from the Census Bureau’s County Business Patterns, but County Business Patterns includes other data, as well, such as number of employees. As you recall from our establishments data over the past months, these counts are broken down by commercial printing business classification (based on NAICS, the North American Industrial Classification System):

Special Note on the Government Shutdown: Some government data series that WhatTheyThink tracks are not being updated or their release is being delayed. Specifically, monthly printing shipments and quarterly profits and revenues data are not being updated. We will have the latest data once publication resumes...whenever that may be.