Printing Shipments Head Into the Dog Days of Summer

The inflation-adjusted value of printing shipments for June 2018 were down from $6.9 billion in May to $6.5 billion in June. On the plus side, it’s not appreciably below the $6.6 billion reported in June 2017. 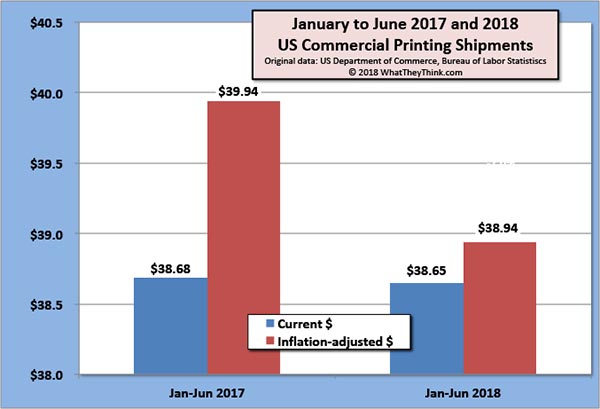 The value of printing shipments for June 2018 were released last week, and followed a similar pattern: inflation-adjusted shipments were down from $6.9 billion in May to $6.5 billion in June. On the plus side, it’s not appreciably below the $6.6 billion reported in June 2017. So there’s that. We have shipments data for the first half of 2018—January to June 2018 shipments came in at $38.9 billion, compared to $39.9 billion in January to June 2017. That’s “only” a drop of 2.5% (the y-axis scale in the chart above makes it look a bit more dramatic than it is). Still, the industry is well below the recent high points that were 2015/2016. If history is any guide, we have one more rough month (July) before—hopefully—things pick up in August.

Then again, just because shipments are down in July doesn’t necessarily mean that it’s going to be—or was—a “rough” month (we should try to wean ourselves off of universally negative interpretations of data); it could very well be planned downtime as staff go on vacation, and the shop takes the opportunity to upgrade various systems, be it hardware or software. After all, summer is a popular time for marriages. Downtime is good—just so long as there is substantial uptime at some point.