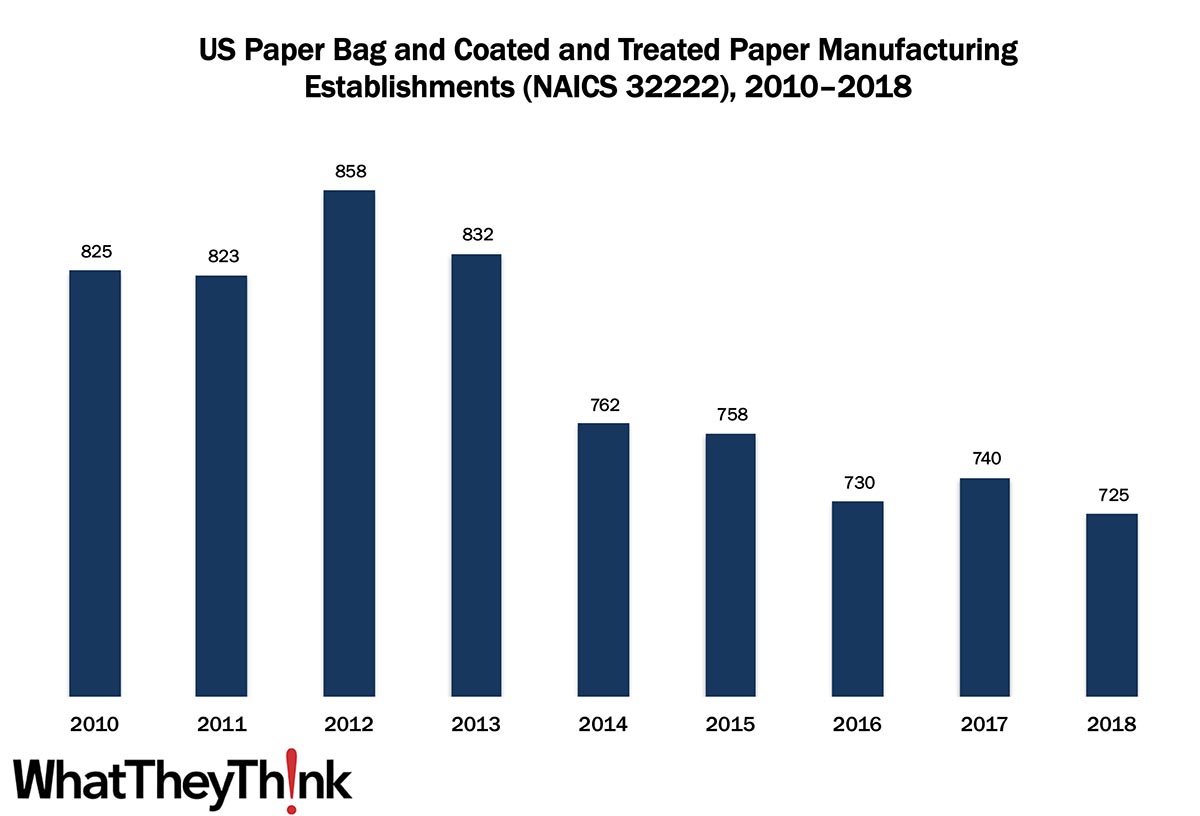 In our ongoing, semi-weekly look at establishment and employee counts of graphic arts businesses, we have turned to packaging/paper converting establishments. In 2010, there were 825 establishments in NAICS 32222 (Paper Bag and Coated and Treated Paper Manufacturing), but by 2018, that number had declined to 725, despite a shooting up to 858 establishments in 2012.

This industry comprises establishments primarily engaged in one or more of the following: (1) cutting and coating paper and paperboard; (2) cutting and laminating paper, paperboard, and other flexible materials (except plastics film to plastics film); (3) manufacturing bags, multiwall bags, sacks of paper, metal foil, coated paper, laminates, or coated combinations of paper and foil with plastics film; (4) manufacturing laminated aluminum and other converted metal foils from purchased foils; and (5) surface coating paper or paperboard.

At the time, “paper vs. plastic” considerations anecdotally worked in paper bags’ favor, more and more municipalities had been banning or adding surcharges to plastic bags, and paper bags are easily recycled. At the same time, the growth and popularity of reusable bags have been making this conversation moot. (Remember, this was long pre-COVID.) Trends in retail can trickle down to affect bag demand, and there is still demand for niche/boutique bags. Digital printing can eliminate the “blank bag,” and laminates and other types of coatings—plastics, foils, embellishments, etc.—increase strength, aesthetic appeal, etc., but may adversely impact recyclability.

This four-digit NAICS comprises a variety of different converted packaging types, and over the next few weeks, we will be looking at them in turn, including:

It’s been a while since we checked in with unemployment claims. Yesterday, the Department of Labor reported:

Well, it’s below one million, if that’s our new benchmark. By the way, the number above does not include the 320,237 initial claims for Pandemic Unemployment Assistance (PUA)—which itself was up from 296,374 the previous week. On the “plus” side, continued unemployment claims for the week of November 7 (continued claims lag initial claims) decreased to 6,372,000 (seasonally adjusted) from 6,801,000 the week before.