In August 2020, printing shipments rose to $6.90 billion—the third straight month of increasing shipments—and while it’s still well below August 2019’s $7.52 billion, given where we came from, that ain’t bad. 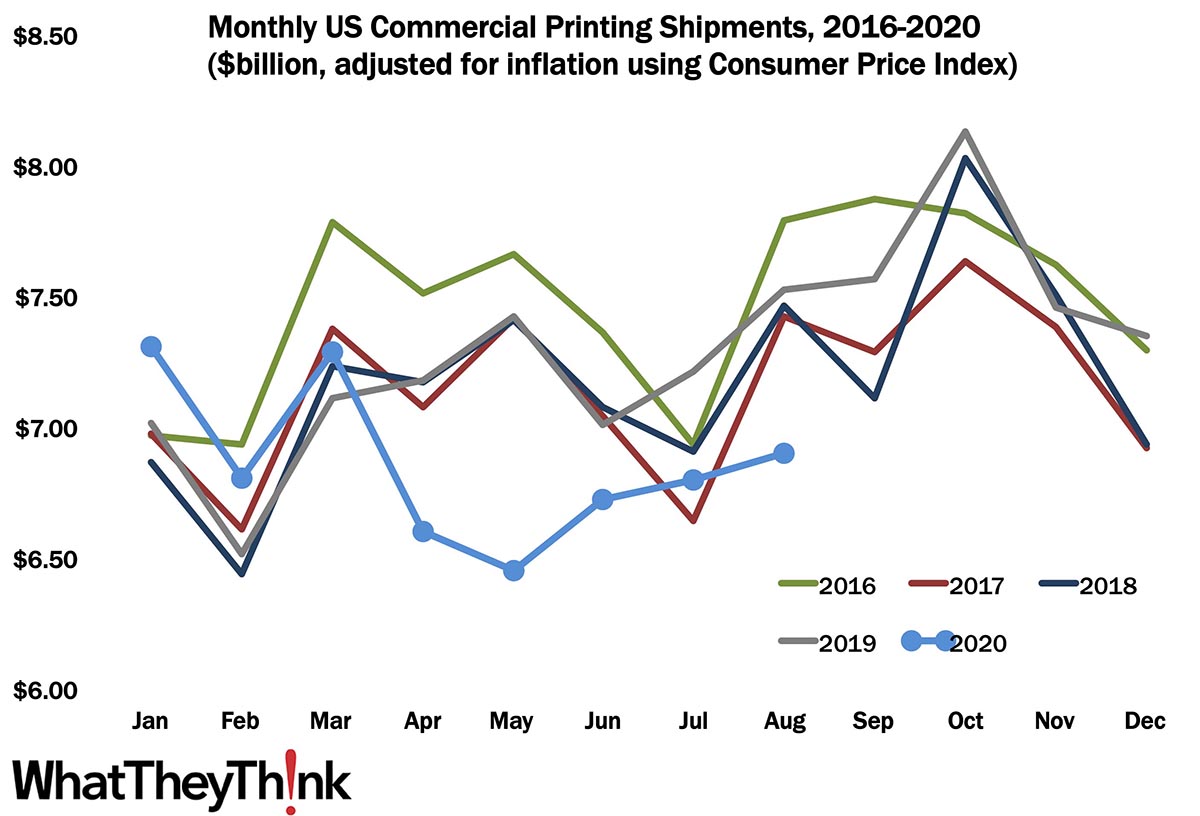 In August 2020, shipments were up for the third month in a row—and in the past five years (even longer if we dig into our shipments archive) that has only happened once before: in the latter half of 2019, we had four months of increasing shipments.

April and May were, as we knew they would be, very bad, but we saw a strong rebound in June, which continued in July and now in August, where printing shipments rose to $6.90 billion. And while it is still well below August 2019’s $7.52 billion, given where we came from, that ain’t bad.

There are a lot of forces at play here. The first is recovery from the worst of the pandemic as businesses have—in large part—reopened. The second is what has turned out to be the highlight of the year: immense demand for social distancing and other safety signage. The third is the upcoming election (which feels like we have been approaching asymptotically), and elections, especially major national ones, always benefit the printing industry. In the social media era, more attention is given to electronic campaigning and the debacle that is Facebook, but there is still a lot of spending on traditional campaign advertising channels, such as direct mail and TV/radio. And of course lawn signs.

So we are expecting another continued upward trend in September. As for October, that was usually a high point of the year under the previous seasonality as the holidays loomed, but what this year will bring—with retail being as challenged as it has been—is up for grabs. We’re cautiously optimistic that the upward trend will continue into October, but it probably won’t be quite the spike it has been in past years.

Beyond that, it will be a function of what happens with the virus. We’re in mid-October, and there are still record numbers of outbreaks in some parts of the country, and some places where the virus had been under control (such as New York City) have seen things worsen as people move inside with the cooler weather. We could be in for a long, bad winter and go into next spring in the same situation we were in last spring, which would suck on so many levels, if for no other reason than the events and hospitality industries have been some of printers’ biggest verticals, and those print businesses reallyneed the return of those primary markets and customer bases. But that’s only going to happen if the virus is under control.