In 2010, there were 7,221 US periodical publishing establishments; by 2017, that number had dropped to 5,279. Magazines have been struggling in the Internet age, with closures and consolidations, but also have been seeing a shift in what constitutes “periodical publishing.” Also: we’re officially in a recession (surprise). 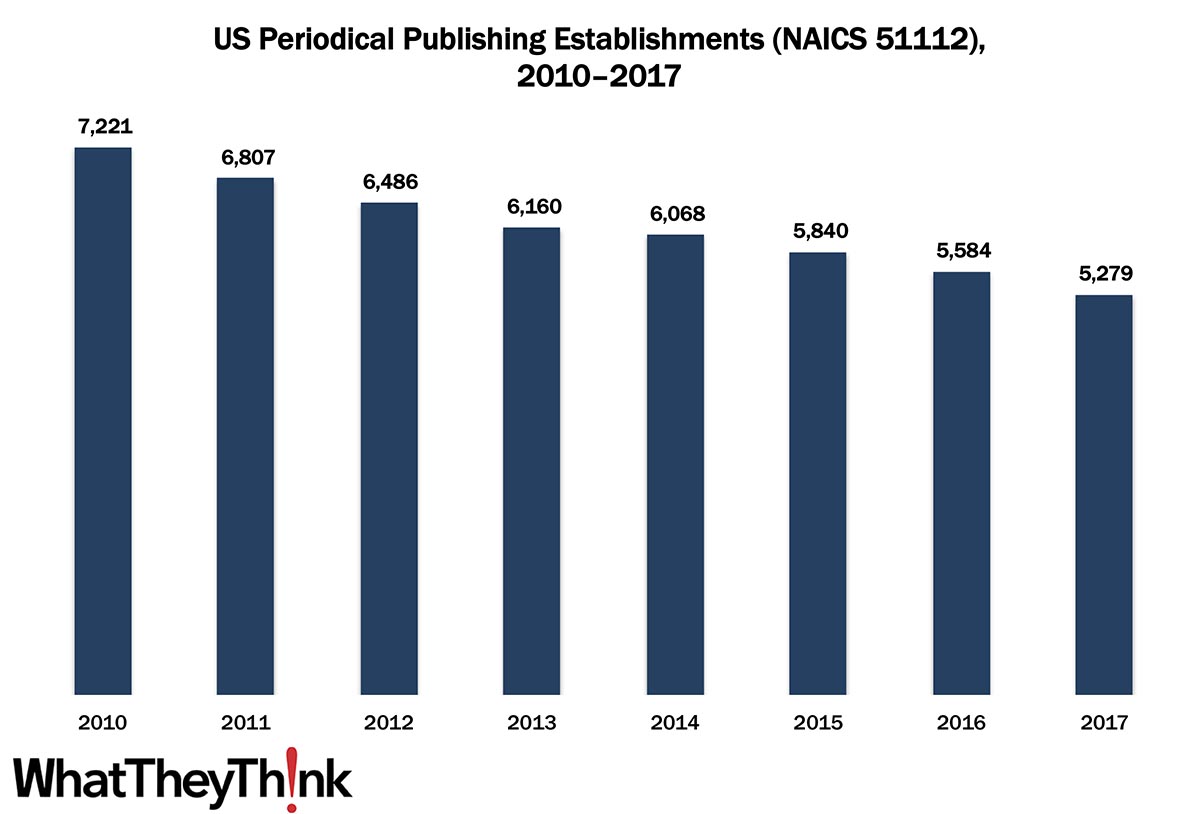 In 2010, there were 7,221 establishments in Periodical Publishing (NAICS 51112); by 2017, that number had dropped to 5,279. There is a lot going on with periodical publishing; some of it is bad news, such as magazines and their publishers shutting down, or merging, or being acquired by other entities. Perhaps the weirdest acquisition in the magazine publishing world was last year’s sale of the Sports Illustrated brand to Authentic Brands Group. Not the magazine, just the brand and the ability to license its intellectual property like photos.

But focusing on print ignores the fact that magazines are just as invested, if not more so, in its digital/online component. (Even the Magazine Publishing Association changed its name to the Association of Magazine Media.) If these periodical publishers then see themselves as media companies, do they classify themselves in NAICS 51112? Also, Internet publishers, streaming media, and Web search portals have their on classification (NAICS 51913). So some of these establishment declines are very real and portend turmoil in the periodical publishing space, as publications lose circulation/readership as well as advertising (both physical and digital), but also reflect changes in what constitutes a “periodical publisher.”

To the surprise of absolutely no one, on Monday, the National Bureau of Economic Research (NBER)—aka the recession wranglers—determined that we are indeed in a recession: “a peak in monthly economic activity occurred in the U.S. economy in February 2020. The peak marks the end of the expansion that began in June 2009 and the beginning of a recession. The expansion lasted 128 months, the longest in the history of U.S. business cycles dating back to 1854. The previous record was held by the business expansion that lasted for 120 months from March 1991 to March 2001.” They added an interesting wrinkle: “a peak in quarterly economic activity occurred in 2019Q4. Note that the monthly peak (February 2020) occurred in a different quarter (2020Q1) than the quarterly peak.”

The NBER acknowledges that this recession is not like past recessions. “The usual definition of a recession involves a decline in economic activity that lasts more than a few months. However, in deciding whether to identify a recession, the committee weighs the depth of the contraction, its duration, and whether economic activity declined broadly across the economy (the diffusion of the downturn). The committee recognizes that the pandemic and the public health response have resulted in a downturn with different characteristics and dynamics than prior recessions. Nonetheless, it concluded that the unprecedented magnitude of the decline in employment and production, and its broad reach across the entire economy, warrants the designation of this episode as a recession, even if it turns out to be briefer than earlier contractions.”

On the plus side, the BLS has announced that inflation is down. So it’s not all bad news!