Late last year, Frank Romano completed History of Desktop Publishing, the third book in a trilogy that includes History of the Linotype Companyand History of the Phototypesetting Era. This book, described by Jonathan Seybold as a “Tour de Force,” is enriched with Frank’s deep knowledge of the history of the printing industry. This article offers an overview of some of the book’s highlights.

Late last year, Frank Romano completed History of Desktop Publishing, the third book in a trilogy that includes History of the Linotype Company and History of the Phototypesetting Era. Romano, Professor Emeritus at Rochester Institute of Technology and President of the Museum of Printing in Haverhill, Mass., provides an encyclopedic and personal eyewitness view of the foundations, early development, and execution of the technology that created the foundation for the term “Desktop Publishing.”

“The Desktop Publishing revolution transformed both publishing and computing, and launched us on the road to the Digital World we now live in. Setting out to write a history of how this came about is a daunting proposition: So many different technologies were coming together. There were so many players, so many companies. So much to know and to understand. But Frank Romano has the unique background, skills, and resources to take this on. He has produced an amazingly comprehensive, rich, and detailed history. All presented in an easy, personal, accessible fashion that draws you in and keeps you turning the pages. It is truly a Tour de Force!”

History of Desktop Publishing comes in at an even 400 numbered pages. It’s a massive tome, and be forewarned—Frank tends to write databases. His writing is encyclopedic and personal. He understands that desktop publishing did not emerge fully formed in 1982 like some Steve Jobs-inspired Venus on a half shell. Frank’s book includes a lot of history lessons in the early pages, with entire chapters on typewriters and word processing. Here’s a photo of Frank and me with the book. 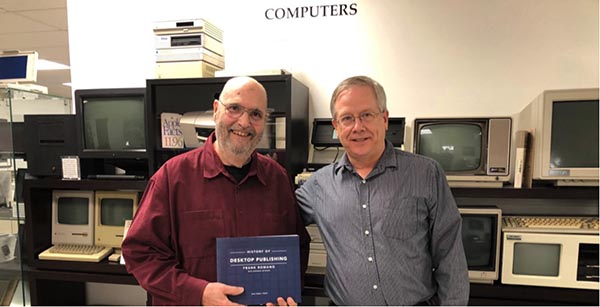 If you’ve ever had the opportunity to hear Frank speak, then you won’t be surprised to learn much of the book builds on his dry wit, puns, and personal asides, along with a deep understanding of the history of printing. An example of his wry humor comes on page 83 as he is writing about some of the early printers associated with personal computing. He describes the acronym NLQ (near-letter quality) as “almost good enough for business.”

Frank’s book shares celebrity stories, too. When Frank meets a famous author like Stephen King or Isaac Asimov, does he ask for their autograph? No way! Frank wants to know what kind of typewriter or word processor they use. If you ever need to know the name of an obscure word processing program from the 1980s or 1990s, it will be in this book…as is the news that Evelyn Berezin was the designer of the first computer-driven word processor.

The chapter on PCs and Workstations is personal to Frank; it’s his life story as much as a technology story. When I was a kid, I remember a popular series of books called “I Was There.” The premise of the series was that a kid or two would be plopped down in the middle of an historic event, and that tale would then be told from a child’s perspective. I learned about the Boston Tea Party, Pearl Harbor, and the Manhattan Project this way. History of Desktop Publishing is Frank’s “I Was There” book. He’s a copy boy at the Brooklyn Eaglehearing the clickety-clack of teletypes, and he notes that the sound of teletypes continues to be the background soundtrack for some television newscasts even though the technology is dead and gone. His job as an office/messenger boy at Linotype introduces him to typographic legend Hermann Zapf, whose professorship he will later be named to at Rochester Institute of Technology. Much later, Frank connects Apple Computer’s Steve Jobs—a man whom Frank describes as “a demanding perfectionist”—to Linotype. This step opened up the Linotype library of fonts to desktop users. Frank’s personal asides can be a bit distracting at times, but they are what gives this book its heart. 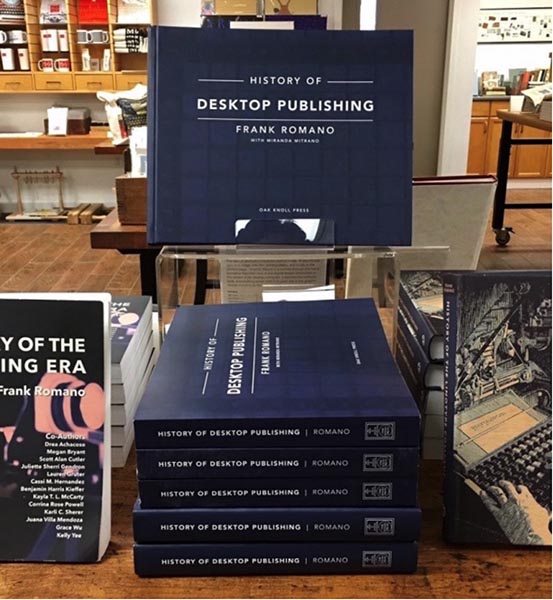 The History of Desktop Publishing, for sale at the Museum of Printing Gift Shop.

If you’re seeking suggestions on navigating Frank’s book, I recommend starting with one of the chapters on the people who drove the desktop publishing revolution. This book really comes alive when Frank talks about these people. Two good choices are the chapters on Steve Jobs of Apple Computer and Paul Brainerd of Aldus. It could be that the right way to read this book is by jumping around to the sections that most appeal to you—and there will likely be many!

Frank includes many wonderful nuggets in gray-tinted boxed sections. A few examples include Steve Jobs’ 2005 Stanford commencement (pages 99–101), a John Warnock memo that sets the pieces on place for the Portable Document Format (pages 153–156), a profile of artist Lance Hidy (page 237), and Frank’s take on the birth of digital photography (pages 254–257).

Although there are many, many fun moments in this book, here are a few more highlights:

Although the prose could benefit from a sympathetic editor at times, the work is personal, and this is Frank’s book. You could make the case that there are two shorter books concealed in History of Desktop Publishing.The first would be Frank’s memoir—I’d be first in line for that one—and the other is a concise history of desktop publishing without the database parts. Frank dedicates nearly one hundred pages to TypeWorld/Electronic Publishing press release titles from 1983 to 1995. There are lists of long-forgotten word processing and page layout programs. Frank, ever the historian, includes these for the simple reason that if he doesn’t, who will?

There’s just so much in this book. It’s a bit like surfing the Internet in the early days—you’re never quite sure what you’ll bump into. If you’re anything like me, you won’t read this book from front to back. Instead, you’ll sample it, dip in, and enjoy…all while finding answers, obscurities, and some truly amazing personalities.

History of Desktop Publishing is available from the publisher, Oak Knoll, and is also sold in the gift shop at the Museum of Printing.

I wonder if he included “Set and Send”? This bit of software enabled graphic designer to use their MAC or Lisa and Microsoft Word to set galley type on a Compugraphic. The one column wide galley type cost $15 a foot and eliminated the need to mark up text sent out to tyoesetters. One would then paste up the galley type on board to prepare camera ready art. This was before page layout apps were available.