3D-printed candy. Rechargeable workout clothes. Smart sneakers can improve your running form. A knitted scarf based on a CVS receipt. Living concrete. A new, more accurate typewriter font, for some reason. How Slack has ruined work. Library ebook provider Overdrive acquired by private equity firm. Why was there no ebook revolution in the 2010s? “The” most powerful word in the English language. A journey inside the Mellotron, one of the weirdest musical instruments. All that and more in WhatTheyThink’s weekly miscellany.

If at any point you're feeling sad or cross today just have a look at this picture of a man who loves his giant onion pic.twitter.com/fRLMo4M00w

WhatTheyThink contributor Pete Basiliere writes to Around the Web:

I was at CES 2014 when 3D Systems unveiled its device for 3D printing food (candy, really). Discussions that I had turned up the fact the samples that 3D Systems provided to attendees and appeared to be made during the show were not produced on site due to health regulations. Instead they had been produced ahead of time in a controlled environment.

Fast forward through six tumultuous years at DDD (with former HP exec Vyomesh Joshi at the helm for much of the time) and it appears the device is reappearing in a more developed form.

Yet another example of the future of jetting technologies beyond inks.

Spotify will now make a playlist for your cat https://t.co/uIWL73yyrF pic.twitter.com/HmZFTR0M6z

Charge Up Your Workouts

Are your workout clothes charged up and ready to use? Japanese firm Wisenfit EMS offers rechargeable workout clothes that can help with muscle gain, improved endurance, rapid fat burn, or muscle relaxation, depending on your workout goals. And the good news? It functions up to eight hours on only a 5% charge. (Don’t you wish your phone could do that?)

Are you an avid runner? Looking to evaluate and improve your running form? At last week’s Consumer Electronics Show (CES), ASICS launched a new “smart shoe” called the Glideright that can help runners run more efficiently. From Gizmodo:

Each run was recorded on video and then run through ASICS’s proprietary Run Analyzer program. After that, I got a chance to look at my results and it was honestly one of the first times I’ve realized how many little things go into running. ASICS told me I have decent form—as in I don’t bounce too high, which is bad for knees. And compared to their dataset of 10,000 runners, I generally fall within acceptable averages for arm and leg movements. That said, in the normal shoes my ankles flexed 35 degrees. The same run in the Glideride shoes dropped that number down to 24 degrees. Since both runs were fairly short, it’s hard to say how that would translate over longer distances like a 5K or a 10K. Maybe I’d be able to run longer at my max pace, but it’s impossible to know for sure without testing it for myself.

ASICS also introduced an even more advanced show called the EvoRide which also “measures things like overall efficiency, vertical movement, landing load, kicking force, foot strike, stride height, and ground contact time. And because the sensor is in both shoes, you can get a picture of how symmetrically—or asymmetrically—you run.”

Had to pull over in order to reboot my car, love being in the future

CVS’s epic length receipts may be a pain in the neck, but now you can keep your neck warm with this handmade CVS receipt scarf which, ironically, is shorter than an actual receipt. Only $19.95 at Etsy, and with a much shorter receipt. 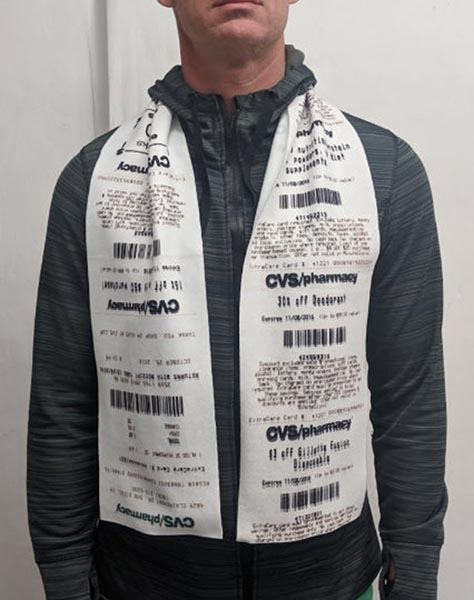 It's probably a good idea to make sure that whoever made the scarf didn't buy anything embarrassing. Also, if you return the scarf, do you need to include the receipt? If so, which one...?

an interdisciplinary team of researchers at the University of Colorado, Boulder, has created a rather different kind of concrete — one that is alive and can even reproduce.

Minerals in the new material are deposited not by chemistry but by cyanobacteria, a common class of microbes that capture energy through photosynthesis. The photosynthetic process absorbs carbon dioxide, in stark contrast to the production of regular concrete, which spews huge amounts of that greenhouse gas.

Bacteria-based concrete also has the ability to heal its own cracks.

A headline from Wired caught our attention and distracted us: “How Slack ruined work.”

“Technology advances usually supplant what has come before but Slack hasn’t, it’s just doubled the pain,” he says. The problem, Miller explains, goes beyond the inconvenience of monitoring another inbox. He sees Slack as a particularly “scary offender” in stopping people getting their work done because it encourages them to be constantly distracted.

And when you hear that Slack clack noise, it’s very easy to

Looking for “an advanced, open source, hyperrealistic, multilingual typewriter font for a new decade!”? No, nor were we, but now there is one: TT2020. Says Boing Boing: “Creator Fredrick Brennan (previously) points out that most fonts which attempt to create the look of a real analog typewriter lack alternative glyphs and other modern features, displaying tell-tale repetitions of aberrations and flaws. He spotted some recent howlers in expensive Hollywood productions that should know better, such as The Joker.” TT2020 comes in a variety of weights and styles. Or you could just go buy a proper typewriter.

In related news: during the Cold War, the Russians used to bug US Embassies’ Selectric typewriters, capturing typists’ keystrokes. Ingeniously, other parts of the typewriter were repurposed to supply power to the transmitters.

Overdrive is one of the biggest—if not thebiggest—ebook lenders to libraries. Librarians have a love-hate relationship with it (DRM-related), but it is one of the few affordable options for libraries to supply ebooks to patrons of both public and academic libraries.

Oh, well, it was nice while it lasted: “Global Investment Firm KKR to Acquire Overdrive For an Undisclosed Amount.”

The Revolution Will Not Be Published

A decade ago, publishing gurus were predicting that the 2010s would be the decade of the “ebook revolution.” Well, not so much. Sure, people buy and read them, but by the end of the 2010s, they pretty much stayed at about 20% of book sales, with print comprising the remaining 80%. Vox has a look at the revolution that wasn’t: “the digital natives of Gen Z and the millennial generation have very little interest in buying ebooks. ‘They’re glued to their phones, they love social media, but when it comes to reading a book, they want John Green in print,’ says [Andrew Albanese, a senior writer at trade magazine Publishers Weekly and the author of The Battle of $9.99. “The people who are actually buying ebooks? Mostly boomers.” Why? The ability to increase the font size.

He’s Got a Point

A stopped clock is correct twice a day, but a sundial can be used to stab someone, even at nighttime. JOHN HODGMAN

Via CNN, the New York Public Library recently released its list of the Top 10 checkouts of all time. At the top of the list? The Snowy Dayby Ezra Jack Keats. It’s a children’s picture book about a boy named James enjoying the first snowfall, and has been checked out of the NYPL 485,584 times since it was published in 1962. Number two is The Cat in the Hat, and number three is 1984. 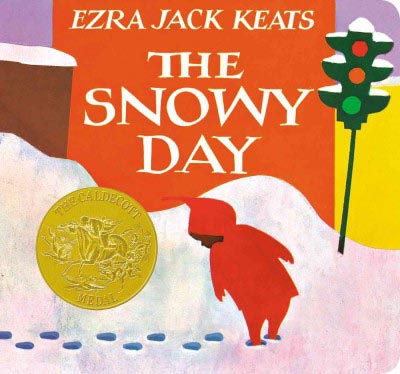 Never mind, some of y’all are too young for that mind blower. ??

“The” Most Powerful Word

What is the most powerful word in the English language? We all probably have our own ideas, but for the BBC that word is “the.” (But of a letdown, really.) “‘The’ tops the league tables of most frequently used words in English, accounting for 5% of every 100 words used.” But that’s not all: “‘the’ lies at the heart of English grammar, having a function rather than a meaning. Words are split into two categories: expressions with a semantic meaning and functional words like ‘the’, ‘to’, ‘for’, with a job to do. ‘The’ can function in multiple ways....Helping us understand what is being referred to, ‘the’ makes sense of nouns as a subject or an object. So even someone with a rudimentary grasp of English can tell the difference between ‘I ate an apple’ and ‘I ate the apple’.”

“For the love of God, this man is bleeding out! Someone get me bandages!”

One of the most distinctive—and yet unwieldy—instruments in the rock world was the Mellotron. Basically, it was an upright organ cabinet filled with recorded strips of tape. When you played the keyboard, it ran the tapes over a set of tapeheads, triggering the sounds. It was often used to make bands sound more orchestral; the Moody Blues made extensive use of it and they were often dubbed “Pindertrons” as Moodies keyboardist Mike Pinder had once worked for Streetly Electronics, the manufacturer of the Mellotron, as a tester and was one of the few who could keep the often unwieldy instrument in proper working order, especially on tour. Pinder introduced the Mellotron to John Lennon, who used it on “Strawberry Fields Forever,” and it would eventually become one of the hallmark instruments of the progressive rock era.

Indeed, the Mellotron produced the distinctive sound of one of the pioneers of progressive rock, King Crimson. On the 51st anniversary of the of the founding of the first incarnation of Crimso, Boing Boing takes an inside look at this unlikely instrument.

Not So Grand Piano

A Farewell to the King 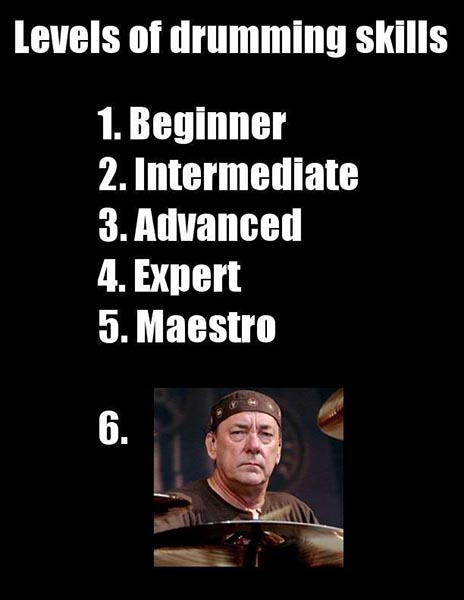 1888: The National Geographic Society is founded in Washington, D.C.

1910: The first public radio broadcast takes place; a live performance of the operas Cavalleria rusticana and Pagliacci are sent out over the airwaves from the Metropolitan Opera House in New York.

1973: Elvis Presley’s concert Aloha from Hawaii is broadcast live via satellite, and sets the record as the most watched broadcast by an individual entertainer in television history.

1876: The first newspaper in Afrikaans, Die Afrikaanse Patriot, is published in Paarl.

1936: The first building to be completely covered in glass, built for the Owens-Illinois Glass Company, is completed in Toledo, Ohio.

1962: The Derveni papyrus, Europe's oldest surviving manuscript dating to 340 BC, is found in northern Greece.

27 BC: Gaius Julius Caesar Octavianus is granted the title Augustus by the Roman Senate, marking the beginning of the Roman Empire.

1492: The first grammar of the Spanish language (Gramática de la lengua castellana) is presented to Queen Isabella I.

1993: Martin Luther King, Jr. Day is officially observed for the first time in all 50 states.

1915: Georges Claude patents the neon discharge tube for use in advertising.

1940: You Nazty Spy!, the very first Hollywood film of any kind to satirize Adolf Hitler and the Nazis, premieres, starring The Three Stooges, with Moe Howard as the character “Moe Hailstone” satirizing Hitler.

1953: Almost 72% of all television sets in the United States are tuned into I Love Lucy to watch Lucy give birth.

1983: The Apple Lisa, the first commercial personal computer from Apple Inc. to have a graphical user interface and a computer mouse, is announced.

1986: The first IBM PC computer virus is released into the wild. A boot sector virus dubbed (c)Brain, it was created by the Farooq Alvi Brothers in Lahore, Pakistan, reportedly to deter unauthorized copying of the software they had written.