NYC’s proposed ban on fur (for fashion) causes a kerfuffle. A wearable plant vest that is...er, self-watering. A bipedal delivery robot is now for sale. Japan recycles cardboard to use as beds for the 2020 Tokyo Olympics competitors. A roundup of “highlights” from this week’s Consumer Electronics Show. “Charmin looks to disrupt the toilet experience with new technologies.” An inflatable pub for grown-up parties. At last: a color E Ink display. A deep dive into the history of the board game Scrabble—and the small Vermont town that used to manufacture all the letter tiles. A brilliant billboard advertising the new “Dracula” series. Two words: “disco clam.” Pro tip: don’t see the new “Cats” while tripping on LSD. All that and more in WhatTheyThink’s weekly miscellany.

My New Years resolution is to annoy less grammar pedants.

Fur in fashion is under attack. Again. Turns out it's an emotional topic, especially in the society salons of New York. From the Washington Post:

The most recent brawl took place in a wood-paneled, not-quite-grand salon in New York’s City Hall this spring. By the fifth hour of more than seven hours of public hearings on a proposed ban on the production and sale of new fur apparel, the testimony had spiraled into Shakespearean hysteria.

OK, if fur isn’t your thing, how about this: a wearable vest that grows a self-sustaining garden watered by your own urine? From CBC:

Aroussiak Gabrielian says she was inspired to create what is believed to be the world's first wearable farm after seeing what her body could provide for her newborn.

The project, Posthuman Habitats, is a vest or cloak that grows plants and crops using fertilizer from insects and human waste. The vests are currently on display in Beijing as part of an exhibition called Human (un)limited. 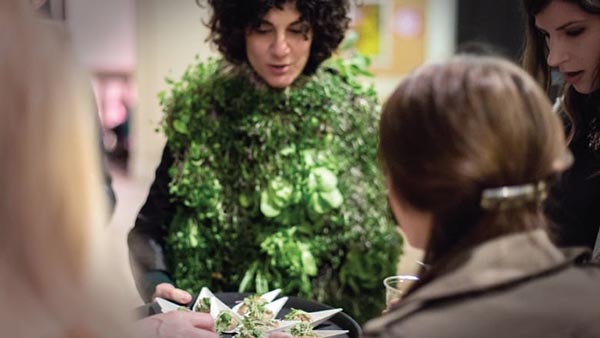 Between the fur and the vegetation, maybe synthetic fabrics are the way to go.

A dispute over whether Antiqua or Fraktur was the more ‘German’ font lasted hundreds of years. Otto von Bismarck refused to read anything not printed in Fraktur; Goethe and Nietzsche favoured Antiqua. The Nazis outlawed Fraktur, but printed the ban using Fraktur. pic.twitter.com/vGrialhadK

The Stars Look Down 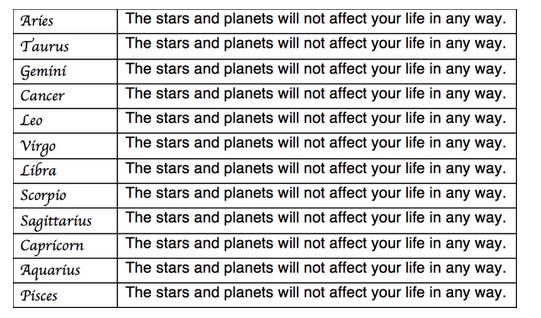 Adidas gives up on reshoring sneaker production. The company is closing two Speedfactory operations, in Germany and Atlanta, moving all production to Asia. The goal was to be able to produce sneakers closer to the point of need to reduce shipping emissions, but that just hasn't panned out for the company, who has instead chosen to consolidate manufacturing in China and Vietnam. Sad.

Shoppers in Thailand are getting creative after a new plastic bag ban https://t.co/mRHW4wUlzj pic.twitter.com/PcpLKSx1a8

In the not-too-distant future, when you order something online, you may see this stalking up your driveway: 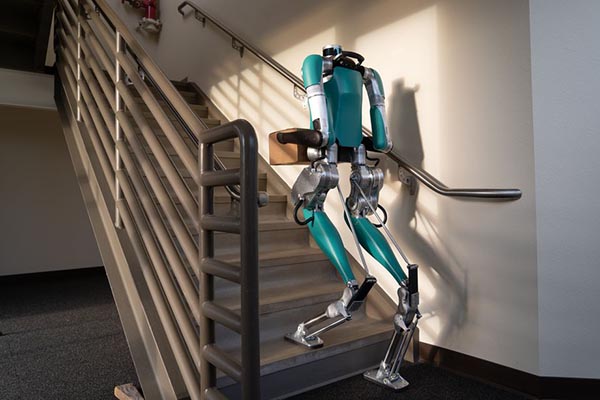 Meet Digit, a bipedal robot from Agility Robotics that is now for sale.

Digit is approximately the size and shape of a small adult human. It’s able to navigate environments semi-autonomously with the help of LIDAR and other sensors, and it can carry boxes in its arms up to 40 pounds (18 kilograms) in weight. Agility Robotics says it can be put to a range of uses, including in logistics, warehouses, telepresence, and industrial inspection.

Telepresence? Anyway, automaker Ford has bought the first two units to experiment with last-mile package delivery. How much will Digit cost? “Low-mid six figures.” But, said Agility’s CEO, “When factoring in upkeep and the robot’s expected lifespan...this amounts to an hourly cost of roughly $25.”

At some point, though, you may hear it grumbling, “Here I am, brain the size of a planet and they ask me to deliver a box. Call that job satisfaction? ’Cos I don’t.”

To Sleep, Perchance to Box

Recycling beds. Capital idea! For the Tokyo 2020 Olympics and Paralympics, competitors' bed frames will be made of cardboard and recycled into paper products after the events, and the mattresses will be made from polyethylene materials that will also be reused. The Japanese say they can withstand more than 440 pounds. Wonder when we will see this in our Hiltons and Sheratons as we travel the world? Or, perhaps, when a rogue Digit will pick up the box, sleeper and all, and carry them away.

The world’s first online shopper was Jane Snowball, a pensioner from Gateshead. In May 1984 she used a TV connected to her local Tesco via a phone line to order margarine, cornflakes and eggs in a council scheme to help the elderly. https://t.co/eKpC8RrBai

Postcards from the Verge

The Consumer Electronics Show (CES) took place in Las Vegas this week. Here is an index of The Verge’s CES coverage.

Samsung had a massive press conference where they introduced their Jetsons-like visions of the future. “The theme of Samsung’s big CES 2020 keynote this year was the ‘Age of Experience,’ which is what Samsung is calling its vision of combining hardware, software, and AI to provide digital experiences across all aspects of our lives.” 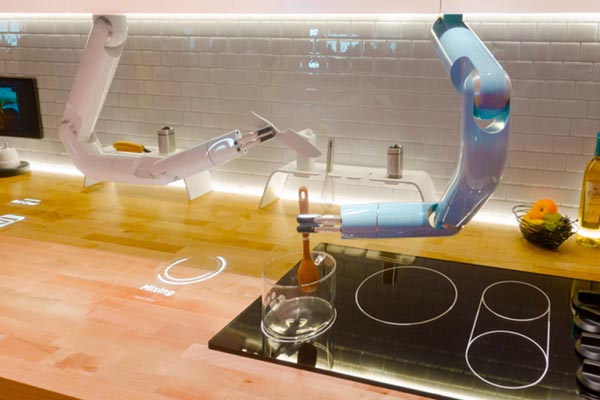 Not a lot (or any) print at CES, but it’ll give you a good sense of how dystopian the next decade may become.

Does your conference room make use of any “smart conferencing” equipment? If so, you may be vulnerable to security breaches. Boing Boing has a roundup of some “idiotic security blunders” that “expose customers to video and audio surveillance, as well as theft of presentations and whiteboard data.” If only hackers were required to sign NDAs.

How it got into a kimono I’ll never know. https://t.co/W8B1KcHBkR

For those of us who like cars with lots of buttons, lights, and knobs, we may be doomed to a future of nothing but touchscreens (which can be a driving distraction since it’s easier to tactilely find the A/C knob without having to look down)—or at least if Audi’s proposed auto interior is any indication of the future of automotive design.

‘Do You Mind If I Put You In My TikTok?’ Asks Younger Cousin About To Ruin Your Life https://t.co/rFWcZPPnhE #OurAnnualYear2019 pic.twitter.com/ISflv4Zhfk

Back in the low-tech, analog world, here’s something we may look into for our next WhatTheyThink planning retreat. Based on the inflatable bounce houses you can rent for kids’ parties, this is an inflatable Irish pub for the grownups. 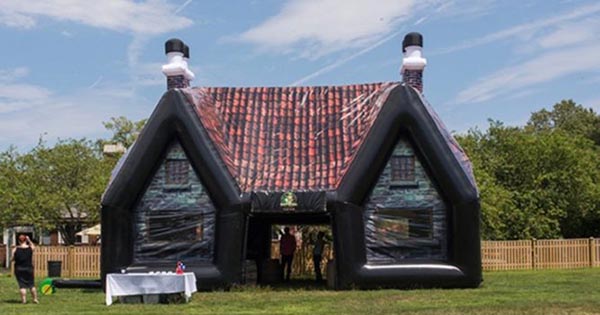 “Up to 80 people can fit inside of one of these inflatable bars and it is absolutely perfect for your next outdoor gathering.” Presumably, they are not bounce-based, which could cause trouble in so many ways.

E Ink’s electrophoretic electronic paper made ebooks like the Kindle take off, and even the arrival of the tablet couldn’t take the wind out of E Ink’s sails (or sales). But for years, one of the limitations of E Ink was that it was stuck with black-and-white, since it’s more of a mechanical than a digital process. (Basically, it works by flipping tiny balls from black to white, like a tiny game of Othello.) The challenge with a color version was that it would take far too long to flip over as many colored balls as you would need to render an image in anything like full color. But at CES, E Ink may have solved the redraw speed problem of colored epaper. Says Gizmodo:

The color E Ink displays work similarly to the black and white versions currently used in devices like the Amazon Kindle. But instead of filling the tiny microcapsules that function as an E Ink display’s pixels with just black and white pigments, the color version adds an array of colored pigments that can be activated and combined in multiple passes to slowly build up a full color image. All in all, E Ink estimates that somewhere around 40,000 colors can be recreated by strategically mixing and combining the pigments. What E Ink announced at CES 2020 is that the company has managed to improve the technology so that a full page refresh can be completed in about two seconds.

Perfect for “Old Man and the Sea”

Display at a library. Some folks get it. pic.twitter.com/63OI7OE8w6

The name Alfred Mosher Butts may not be a household one, but his one claim to fame may very well be: he is the inventor of the board game Scrabble. VT Digger has interesting three-part series on the small Vermont town that for decades manufactured all the tiles for Scrabble sets.

In this unlikely spot, far from any center of commerce or manufacturing, about a hundred Vermonters produced the wooden pieces for every Scrabble set in North America. Butts’ visit came when the plant was near its peak, producing more than a million tiles a day.

The story begins with an 86-year-old Butts (who invented Scrabble in the 1930s, sold the rights to the game early on and, thus didn’t get to profit has much as he should have) visiting the plant in 1985.

After Scrabble was sold, tile production was moved to China. The series is a compelling look at the origin of the game, the rise of the factory, and the dedicated people that ran it.

Fangs for the Memories

Via Boing Boing, a brilliant billboard ad for the TV series Dracula, which features 3D stakes that, as the sun moves across the sky, form an eerie shadow.

The Disco Clam can reflect nearly the entire colour spectrum, allowing it to flash bright white like a disco strobe. https://t.co/V3OIChYAcS

Want to see the new movie version of Cats? No, neither do we. However, if you do, we do not recommend going while tripping on LSD or some other hallucinogen. The Guardian rounds up some responses from Washington Post readers who did try to see the movie off their face:

Imagine if they had seen it straight.

1838: Alfred Vail demonstrates a telegraph system using dots and dashes (this is the forerunner of Morse code).

1912: German geophysicist Alfred Wegener first presents his theory of continental drift. (Afterward, everyone slowly moved away from him.)

1927: The first transatlantic telephone service is established from New York City to London.

1547: The first Lithuanian-language book, Simple Words of Catechism, is published in Königsberg.

1889: Herman Hollerith is issued US patent #395,791 for the “Art of Applying Statistics”—his punched card calculator.

1904: The Blackstone Library is dedicated, marking the beginning of the Chicago Public Library system.

1990: Time Warner is formed by the merger of Time Inc. and Warner Communications.

1927: Louis B. Mayer, head of film studio Metro-Goldwyn-Mayer (MGM), announces the creation of the Academy of Motion Picture Arts and Sciences, at a banquet in Los Angeles, California.

1949: The first “networked” television broadcasts took place as KDKA-TV in Pittsburgh, Pa., goes on the air connecting the east coast and mid-west programming.

1908: A long-distance radio message is sent from the Eiffel Tower for the first time.