Aligning the Supply Chain: Understanding the TC1617x (IT8.7/5) Characterization Target

Idealliance’s Tim Baechle introduces the new TC1617x (IT8.7/5) printer characterization target, explains how it differs from its predecessors, details its benefits, and describes how printers can use the new target to improve the characterization accuracy of a printing system.

The TC1617x (IT8.7/5) is a new CMYK printer characterization target combining the unique patch values in the standard IT8.7/4 target with all the patch values in columns 4 and 5 of the P2P51 target. The letter “x” distinguishes the final version from earlier prototype versions circulated during development. 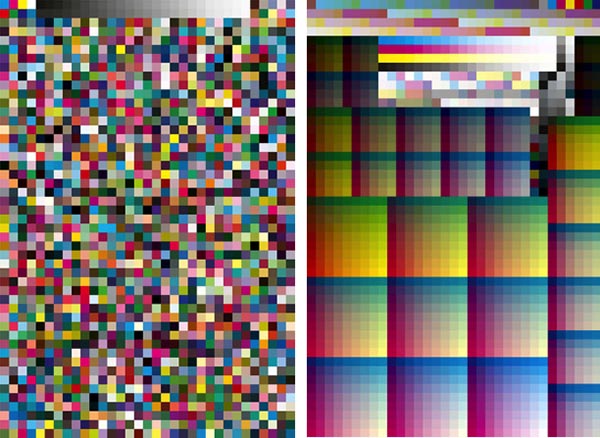 An important side benefit of the TC1617x compared to the IT8.7/4 is that it improves the characterization accuracy of a printing system, thanks to the addition of 29 new gray patches. Under certain circumstances, this can produce more accurate ICC profiles and less chance of unwanted color artifacts in neutral gray image areas, but the difference may be difficult to detect except on extremely stable printing systems.

Unlike the IT8.7/4, the TC1617x is only available in randomized layouts (there is no “visual” version), however the CMY and K-only gray patches are not randomized, but rather arranged as two contiguous gray ramps along the edge of the target. This helps reduce small tonality or color variations throughout the gray ramps due to in-line ink starvation effects or uneven inking that would be magnified if the gray patches were randomized throughout the target.

During development of the TC1617x, several prototype versions were distributed for beta testing. To avoid confusion, the final official version has the letter “x” after the name. Other versions should be discarded as they may not work correctly and will not be accepted for Certifications/Qualifications, such as G7 master submissions.

Three versions of the TC1617x are available from the Idealliance website; two for the i1iSis and one for the i1iO. The two i1iSis targets are designed for either vertical or horizontal gray ramp alignment and are marked accordingly with “V” or “H” in their names.

The i1iO target contains two pages in one image, with the gray scales in line with each other. Before measuring, cut the pages apart so the top of each page is closest to the i1iO armature.

On printing systems subject to uneven inking or directional ink exhaustion, align the TC1617x so the gray ramps point in the direction of paper travel (e.g. around an offset press cylinder) or parallel to ink variation lines. This minimizes the chance of color anomalies within each gray ramp and can yield smoother curves and better G7 wΔCh and wΔL* scores.

The supplied 8-bit TIFF CMYK target images were produced using LSB error diffusion, giving each patch effectively 16-bit precision when integrated by a spectrophotometer aperture. This extra precision can be important in very light gray patches between 0 and 20%.

User-created targets (from the supplied CGATS text files) may not have the same accuracy but should be adequate for most purposes.

CAUTION: Lossy (e.g. JPEG) compression or re-sizing will eliminate most of the extra precision contained in the supplied 8-bit dithered targets.

The TC1617x can be measured by any software that drives the above instruments and accepts X-Rite .pwxf or .rwxf workflow files, or standard CGATS .txt files. Before measuring, copy the supplied .pwxf, .rwxf, or .txt files into a location where the software can easily find them.

Custom TC1617x target images can be created and measured on other software or devices using the supplied CGATS .txt files, but may not be so accurate (see 16 bit Target Precision).
ICC profiles can be created from TC1617x data in basICColor print, X-Rite i1Profiler, or any software that accepts (and uses all the patches of) customer-generated CMYK target designs.

Impact on the P2P Target

The TC1617x eliminates the need for a separate P2P51 target for G7 Master Colorspace submissions, but the P2P51 is still recommended for G7 Grayscale or G7 Targeted submissions and is still required by certain G7 calibration or verification software.

Present (and future) CRPC data sets that have been (and will be) issued by CGATS or ISO in standard IT8.7/4 format will also be distributed by Idealliance in the G7-friendly TC1617x format. This is being done because of the following advantages:

Note that for practical purposes, each pair of data sets will be interchangeable, however the IT8 version will continue to be the only official “standard” data until further notice.

The 29 new gray patches added to TC1617x data sets will be synthesized to perfectly meet the G7 neutral gray definitions in ANSI CGATS TR015. Some legacy-data patches (e.g. white, gray or black) may also have to be adjusted slightly to align with the new G7-perfect patches, but these changes should be very small and invisible to the eye.

2) You randomized all the patches, but not the G7 grayscale patches. Why not? This may be more related to marketing rather than colorimetry.

This actually has nothing to do with marketing at all, but everything to do with improving the characterization accuracy of a printing system, including the addition of 29 new gray patches.