Read classic books on the NYPL’s Instagram. Deluxe edition of a classic Philip K. Dick novel. A compendium of classic arcade typography. An immersive edition of Bram Stoker’s Dracula. An Advent calendar for cats. Custom T-shirts based on Spotify data. The current science of CBD. All that and more in WhatTheyThink’s weekly miscellany.

Torn between hanging out on Instagram or reading a novel? Well, thanks to a partnership between the New York Public Library and Mother New York, you can now do both. Classic works of literature have been designed to be read on the NYPL’s Instagram.

The earliest known technical manual in English (on how to operate astronomical instruments) was written by Geoffrey Chaucer. pic.twitter.com/n1ZudTOxf6

Joe Chip Is Up

Via Boing Boing, The Folio Society has developed a deluxe edition of Philip K. Dick’s 1969 scifi classic Ubik. It features full-color illustrations and an introduction by Kim Stanley Robinson (author of the excellent Mars trilogy, among other scifi novels). “Award-winning independent art studio La Boca present this edition in a special die-cut slipcase that typographically shows the title and combines with the vibrant binding to confuse the eye.” And then let the book itself confuse the mind, in that inimitable Philip K. Dick way. 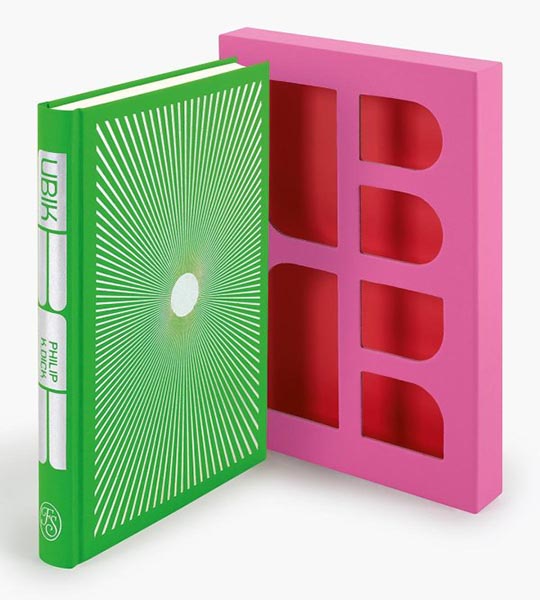 Fangs for the Memories

Are you a fan of Bram Stoker’s Dracula? We are, too, and Beehive Books has launched a Kickstarter to develop “an entirely new way to experience Stoker's masterpiece.” No, not by actually having real vampires visit you in the night, but by presenting the book in an entirely new way: “It’s the entire original text of Dracula, presented as a gorgeously designed and curated briefcase full of maps, letters, diaries, newspaper clippings, telegrams, and phonograph records.” The publisher worked with Dracula expert (and Bram’s descendent) Dacre Stoker “to bring you the most immersive way imaginable to experience this modernist masterpiece of gothic horror.” 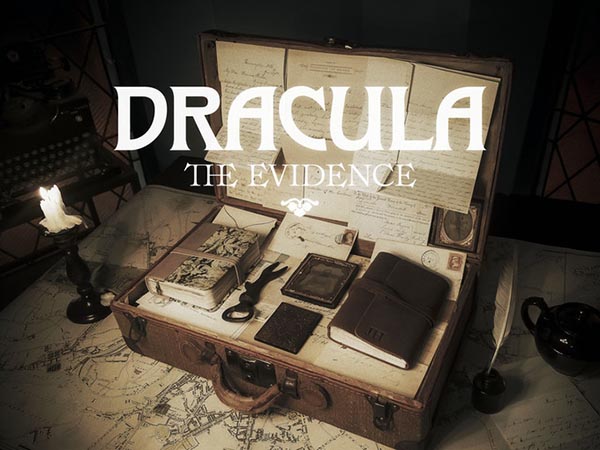 For meetings that don’t last as long as you expect them to pic.twitter.com/4rF4uDgQfc

Also be sure to wear an overcoat in that room.

Are you a fan of old 1970s and 80s arcade games? And typography? Well, then, good news! A new book called Arcade Game Typography, curated by author and Monotype UK typeface designer Toshi Omagari, “gathers together 250 pixel typefaces, all carefully chosen, extracted, redrawn and categorised by style, and each with an accompanying commentary by Omagari.” It also includes essays on videogame typography theory and practice, “documenting the unique advantages and challenges presented to designers of these bold, playful and often quirky alphabets.” 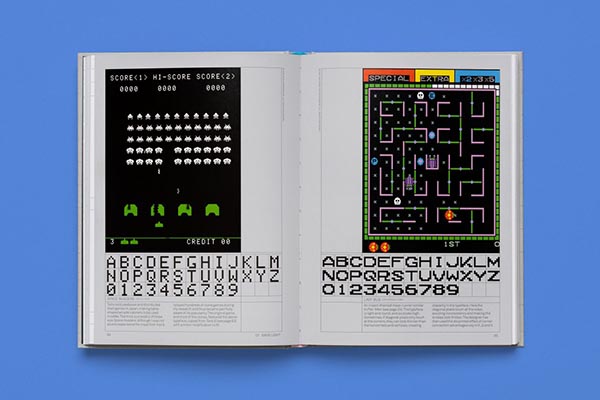 Any of the above books would make great Christmas gifts. And speaking of Christmas...

A highlight of the holiday season for many people is the Advent calendar—opening a little window each day and pulling out a daily gift, be it a LEGO brick, a piece of chocolate, or some manner of potent potable. But why should humans have all the fun? This year, Trader Joe’s is launching an Advent calendar for cats. Says the Trader Joe’s podcast via Mental Floss: “the calendar contains treats made from salmon and seaweed—two ingredients that cats love and that are good for them, too. If they’re patient enough to eat one treat a day for the 24 days leading up to Christmas, your cat will be rewarded with a ‘gigantic,’ fish-shaped treat on day 25.”

Of course the trick will be to keep the cat from mauling the whole thing as soon as it goes up.

Wait...Trader Joe’s has a podcast?

To Coin a Word

Here’s a fun word game to play: over at Merriam-Webster, a feature called Time Traveler lets you find out what words were first used in print the year you were born.

. @Kotkamills has created a plastic-free material for #cups, ISLA® Duo cupstock. This plastic-free and easily recyclable cupstock is based on water-based dispersion barrier. It is digitally printable on Xeikon 3500 range using dry toner technology https://t.co/NVAlXPFTmu pic.twitter.com/FVxeN3O5O6

Have you ever heard of the British Bring Me the Horizon? Nor have we, but they are taking an interesting approach to their merch: “personalized T-shirts to people based on their Spotify listening data.” Basically, says The Verge, you go to their site, enter your six favorite songs from Bring Me the Horizon’s new album (amo), “It then takes your list and any of your previous listening habits with Bring Me the Horizon on Spotify and uses music intelligence platform The Echo Nest to analyze loudness and energy....You’re then delivered a mock-up of the shirt, which is the unicursal hexagram symbol often used by the group, saturated in a smear of color unique to your data.” Bear in mind, this only accesses Bring Me the Horizon Spotify data, not all your data. It’s an interesting idea for uberfans of the group.

The Chips Are Down

Earlier, we mentioned Philip K. Dick’s dystopian scfi novella Ubik, whose protagonist is a technician named Joe Chip. Coincidentally, in what sounds like something out of a Dick story, workers at a company in Wisconsin were embedded with microchips. Says USA Today: “Sporting ‘I Got Chipped’ T-shirts, some 40 workers at Three Square Market, a firm that makes cafeteria kiosks aimed at replacing vending machines, got tiny rice-sized microchips embedded in their hands.”

The company says the chips are not designed to track the employees (it has no GPS capabilities) but rather replace badges and computer log-ons. Essentially, they just scan their hands. Anyone worried about Big Brother, says Three Square Market President Patrick McMullan, should “take your cell phone and throw it away.” He’s got a point.

The New York Times asks, “Does Your Toothbrush Have an App Yet?” Thankfully, no. But why do you ask? “New technology is creating some excitement in the formerly ho-hum world of dental care.” Ah. Digital scanners and 3D printers are changing the face (as it were) of dental repairs, and dentists are using social media to promote their repair work.

Some years ago, Oral-B launched an Internet-connected toothbrush, so you could get feedback on your brushing habits. There is always the fear, though, that someone would hack into it and blackmail you by threatening to send the data to your dentist. But perhaps we’re just being paranoid.

I'm picking up a pancreas from Kinko's in 2 hours. https://t.co/1WWGzMpZEn

What Do We Know About CBD?

CBD-infused products are sprouting everywhere like...um...well, like weeds (plural). CBD (aka cannabidiol)— like the titular Ubik in Phiip K. Dick’s novella—is being touted as a cure for just about everything. “From oils and nasal sprays to lollipops and suppositories, it seems no place is too sacred for CBD,” says the New York Times, which has a good feature that looks at the (so far scanty) research on the effects—positive and negative—of CBD. Is it the wonder drug of our age? No. Does it help for some things? Yes, like anxiety and depression. “While there is hope for treating other conditions with the plant extract, Epidiolex remains the only CBD-derived drug approved by the F.D.A. Most of the research on cannabidiol has been in animals, and its current popularity has outpaced science. ‘We don’t have the 101 course on CBD quite figured out yet,’ said Ryan Vandrey, an associate professor of psychiatry and behavioral sciences at Johns Hopkins University School of Medicine.”

I mean, I watched Cannon, and I kind of liked it, but from what I'm reading, Harold Bloom was its biggest adherent for his entire life. That kind of passion is admirable. Rest In Peace. pic.twitter.com/KqV9WDo33P

Bloomberg Businessweek asks, “What Happens When a Vacuum Company Tries to Make an Electric Car?”

(Please use the Comments field at the end of this article to register any complaints.)

1582: Because of the adoption of the Gregorian calendar, this day does not exist in this year in Italy, Poland, Portugal, and Spain.

1912: The Power of Paper: Former president Theodore Roosevelt is shot and mildly wounded by John Flammang Schrank. Regardless, Roosevelt delivers his scheduled speech—the text of which in his coat pocket blunted the impact of the bullet.

1947: Chuck Yeager becomes the first person to exceed the speed of sound.

1968: The first live TV broadcast by American astronauts in orbit is performed by the Apollo 7 crew.

1939: The New York Municipal Airport (later renamed LaGuardia Airport) is dedicated (and has not been updated since).

1956: FORTRAN, the first modern computer language, is first shared with the coding community.

1923: The Walt Disney Company is founded.

1950: The Lion, the Witch and the Wardrobe by C.S. Lewis is published.

1771: Premiere in Milan of the opera Ascanio in Alba, composed by Mozart at age 15.

1888: Thomas Edison files a patent for the Optical Phonograph (the first movie).

1919: RCA is incorporated as the Radio Corporation of America.

1851: Herman Melville’s novel Moby-Dick is first published as The Whale.

1922: The British Broadcasting Company (later Corporation) is founded by a consortium, to establish a national broadcasting service.

1951: The Studio for Electronic Music was established at the West German Broadcasting facility in Cologne, making the first modern music studio.

1386: The Universität Heidelberg holds its first lecture, making it the oldest German university.

1973: The Sydney Opera House is opened by Elizabeth II after 14 years of construction.