Overheard: “Every machine is a smoke machine if you operate it wrong enough.”

Over at the BBC, an episode of its Made on Earth series looks at how paper is making a comeback.

Over at Boing Boing, a very cool look at Paul DeGraaf’s mechanical paper sculptures—such as a paper keyboard that actually works!

We've written a lot about Cary Sherburne's favorite miracle material, Graphene. Now there's a new book out that gives you the entire scoop on this material, its applications and markets. (No, it’s not printed on pages made of graphene.)

Not So Brief Cases

Me: I would like to buy a briefcase. Here's a nice one from this men's store that I saw on the internet. Please send it to me. Here is my payment.

Me: It's beautiful, thank you.

The Web: Here are six thousand more briefcases to buy

There is a modest scandal brewing in the world of livestreamed poker games. One recent winner, Mike Postle, has been accused by several other players of cheating, which he fervently denies. Postle is a regular on “Stones Live,” poker game livestreamed on Twitch. Says CNBC: “Brill has no specific accusation of what Postle is doing and even admits that she can’t be sure he is cheating. So why does she think he is cheating? His results are too good, according to Brill.”

Interestingly, and while no conclusive proof has been found, it has been suggested that the mystery of how Postle has been winning may have something to do with the RFID chips on the cards the casino uses. “The RFID cards contain chips, that combined with readers in the poker table, transmit information about each player’s hole cards, so that viewers can see the cards on the broadcast (which is on a 30-minute delay to protect game integrity).” Is he somehow accessing the information on the chips? No one knows for sure...yet.

A Wicked Pack of Cards

Via Boing Boing, Nathan Davis started asking existential questions about what happens to a deck of cards when it is shuffled, and he wrote a program to visualize how the deck changes, which he demonstrates in this video:

An invasive fish species that can breathe air and survive on land has been found in Georgia for the first time. And officials are warning anyone who comes into contact with the species to kill it immediately. https://t.co/DHxnRmmOcH

Are you an art lover who also has concerns about the quality of NYC’s water? If so, good news! Playlab, Family New York, and Floating Point have collaborated on a floating art installation called + POOL Light that uses LED lights to indicate the water quality in the East River. Says Engadget: “The 50x50 feet sculpture glows blue if all is well, but it turns teal if a sensor detects pathogens and pink when those levels venture beyond safe swimming standards.”

No indication that it can identify air-breathing terrestrial fish.

I can’t believe I first read this as LINCOLN: GONE VIRAL pic.twitter.com/oThc5R0iRn

Over at Hackaday, a creative, clock-loving user has created a new kind of clock, one that tells the time by spelling it out with selectively backlit letters. Pretty neat! 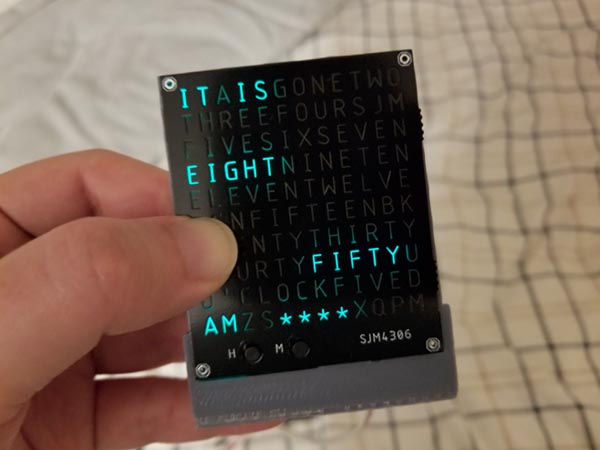 Some of you may remember the old TV show Lassie, many episodes of which inevitably involved the titular canine going in search of help for a human who had become incapacitated in some way, and struggling to communicate a message. (“What is it, boy? Grandpa’s trapped in a well? Down in Dead Rock Canyon?”) Well, if Lassie could only have hung in there for another half century or so, tech is now helping dogs communicate with their owners. Says Wired: “Imagine you’re enjoying a pleasant stroll through the park when you hear someone say, ‘My owner needs your attention! Please follow me!’ You look around and see no one; then you look down and see a dog staring up at you. You think someone’s pulling a fast one. But then the dog reaches around and his mouth tugs something on the yellow vest he’s wearing, and you hear it again. ‘My owner needs your attention! Please follow me!’ the dog seems to say again.” Yes, the voice is coming from the vest.

Granted, you probably aren’t going to be discussing Wittgenstein with your german shepherd any time soon, but these technologies could be a boon for those who rely on service animals.

Ghost In the Machine

In fact, the dogs are definitely better than a police robot, especially one in California that was less than useless.

According to NBC News, Cogo Guebara noticed the police robot when a fight broke out in the parking lot of Salt Lake Park. However, despite pressing the emergency alert button multiple times, the robot merely asked Guebara to step aside and continued to scoot along its preprogrammed path, occasionally telling people to keep the park clean. Ultimately, someone had to call 911 the old fashioned way and fifteen minutes later, a woman involved in the fight was rolled out on stretcher with a bleeding cut on her head.

Robots are mass-producing the meal of the future: insects https://t.co/GkYKpN4U6n pic.twitter.com/feRu02odlB

Gizmodo has the latest on the potential debut of Apple’s AR Glasses sometime in 2020.

Just been sent an encrypted link to my eye prescription. Had to sign in to an account, give details, etc.

Does my optician think someone is going to steal my eyes?

Vox Recode had a story on the growing trend in home offices—by some estimates, 5.3% of workers work solely from home and two-thirds work from some at least some of the time. And early findings indicate that it is...er...working. “While the broad impacts of remote work have yet to be measured across industries and for extended lengths of time, initial studies have found that it can increase productivity and lower employee turnover.”

Someone even wrote a book about how to effectively work from home.

These Are Not My Beautiful Posters

Are you a fan of Talking Heads (the band, not people on TV)? What about pulp novel covers? Vintage ads? If your Venn Diagram includes all three...good news! Todd Alcott has created a series of six posters available as giclée prints that mashup Talking Heads songs, book covers, and magazine ads. Collect the set! Only once in a lifetime does something like this come along! 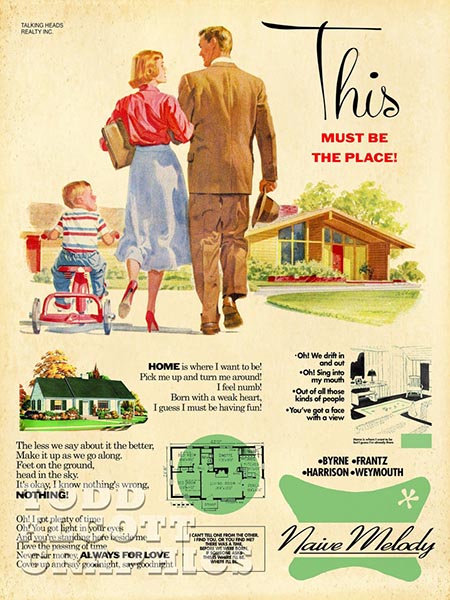 Guys, no. NO. I enjoy your scotch, but WHHHYYYY would I replace the meditative ritual of sipping a glass of single malt at the end of the day with a lonely, Phillip K. Dick booze-pod? Discontinue these NOW. No harm, no foul. We all make mistakes. https://t.co/7HNjsJuslI

What better way to tell other drivers to stop texting than by putting the fear of God[zilla] in them with this car horn that roars like Godzilla. As soon as we order those Talking Heads posters, this is next.

Why is no one investigating the troubling combination of serif and sans serif typefaces in this Poughkeepsie candidate’s campaign logo pic.twitter.com/EiWJ2d9QVh

1777: The Americans defeat the British in the Second Battle of Saratoga, also known as the Battle of Bemis Heights.

1962: Der Spiegel publishes an article disclosing the sorry state of the Bundeswehr, and is soon accused of treason.

1446: The hangul alphabet is published in Korea.

1874: The Universal Postal Union is created by the Treaty of Bern.

1986: The Phantom of the Opera, eventually the second longest running musical in London, opens at Her Majesty’s Theatre.

1950: CBS’s mechanical color system is the first to be licensed for broadcast by the U.S. Federal Communications Commission.

1892: The Pledge of Allegiance is first recited by students in many US public schools, as part of a celebration marking the 400th anniversary of Columbus's voyage.