One of my former students told me she thinks of me every time she forgets a password.

I'm the answer to the security question, "Who was your favorite teacher?"

This is probably one of the most delightful things I've heard in my entire life.

A decade ago or so, there was a bit of an outcry when IKEA changed its typeface, swapping its decades-old Futura variant for Verdana, of all faces. (How quaint are the things that used to outrage us.) Anyway, 10 years on, IKEA has changed its typeface again...to Noto. (Noto is “an open-source typeface family that encompasses every written language in the world, living and dead.”) The original move to Verdana, it turned out, was not because IKEA’s graphic designers only used Word—it was because, unlike its custom Futura-based typeface, Verdana supported Asian characters. Likewise, the move to Noto was intended to go “a step further in making Ikea’s typeface truly inclusive of its global markets.”

How could they say Noto that? 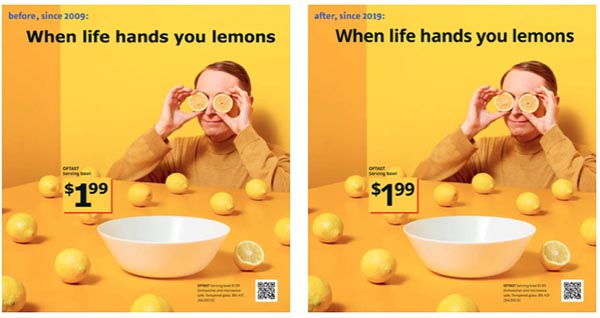 Loving the beautiful labels at @Arconvert_ - an attention grabbing label is usually what attracts me to a bottle (after the fact that it’s filled with wine) #LabelexpoEurope pic.twitter.com/L81563xXPE

Op-Ed from the Future

We have mentioned before in this space a great little book that came out last summer called Because Internet: Understanding the New Rules of Language. The author, linguist Gretchen McCulloch, this week wrote an “op-ed from the future” in the NY Times titled “How Can You Appreciate 23rd-Century English? Look Back 200 Years.” The editorial riffs on the theme of the book which is that while many of us shudder at what the Internet has done to the English language, it’s really no different than what has always happened to the English language: new technologies as well as other factors have changed the way people speak and write. (Actually the printing press did this more than 500 years ago.)

In my research, I came across so many doommongering quotes about how texting was ruining the English language, when we obviously now know it as a cultural renaissance in writing that ushered in the new genre of the textolary novel and other kinds of microfiction, not to mention creating now-classic nonfiction formats like the thread. (I drafted this op-ed as a thread myself, as any sensible writer would do, because how else would I stresstest each of my sentences to make sure they were all pithy and vital?) Not to mention, of course, that the internet as a near-free means of distribution opened up writing to a wider range of writers who no longer needed a publisher or distributor to share their writing with the public.

As ridiculous as the fears of the past seem, when I read them, I found myself seeing with new light the fears of the present. We’ve all heard the complaints about how the youths are communicating these days — many of us even have complained about it ourselves. But what will the people of the 25th century think, looking back at our 23rd-century rants about kids refusing to say “no worries” in response to “thank you?” Won’t they be totally accustomed to hearing “it’s nothing” or its even more reviled short form “snothin” by then? Perhaps these phrases will even seem oldfashioned, the way “no problem” seems stuffy and ironic to us, although people in the 21st century were still sometimes complaining about its novelty.

Think correcting people’s English is a new thing? This week, a story made the rounds about a scholar at the University of Cambridge who unearthed a 1623 copy of Shakespeare’s first folio—with handwritten corrections and annotations. Correcting Shakespeare...that takes guts. But then it was discovered that the owner of the folio, and the writer of the corrections, was poet John Milton, one of the few people who could get away with it. 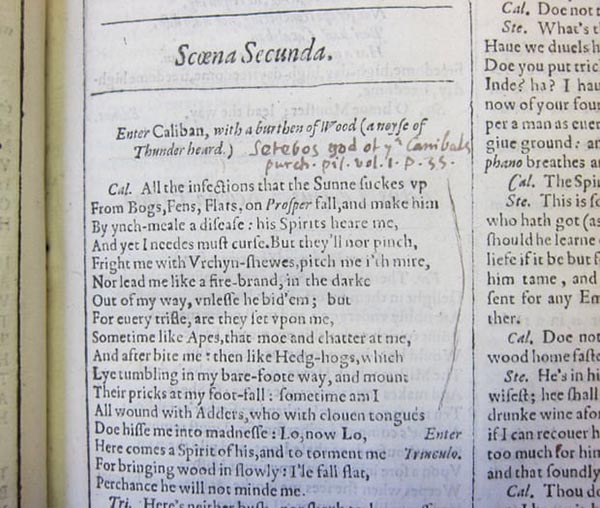 Scott-Warren has made a detailed comparison of the annotator’s handwriting with the Paradise Lost poet’s. He also believes that the work the annotator did to improve the text of the folio – suggesting corrections and supplying additional material such as the prologue to Romeo and Juliet, along with cross-references to other works – is similar to work Milton did in other books that survive from his library, including his copy of Boccaccio’s Life of Dante.

When you were a kid, you maybe hit upon a way to send secret messages in invisible ink: the old “write a message with lemon juice, then hold it over a candle to reveal the secret message.” (In Thomas Pynchon’s Gravity’s Rainbow, Pirate Prentice uses another method, but we won’t get into that.) Anyway, lemon juice and heat are pretty old school. Today’s would-be spies need something more high-tech, and science is happy to oblige. Says The Guardian: “The approach, developed by researchers in China, involves using water to print messages on paper coated with manganese-containing chemicals. The message, invisible to the naked eye, can be read by shining UV light on the paper. With the use of hot air from a hairdryer, the message can be erased and the paper reused.”

They are going to pay them to do it. https://t.co/zXemWw36EX

One of our former contributors poked his head out of retirement this week to pass along a cool animation demonstrating the accuracy of Moore’s Law graphed against actual CPUs and GPUs that appeared from 1965 to 2019.

The Medium Is the Message

Mark Twain claimed he stopped writing letters with a typewriter because he would get more letters back asking about the typewriter than about anything else. (Image: University of Virginia Library) pic.twitter.com/uKngVc4G90

DRM...for Nerf darts. If digital rights management (DRM) for coffee (Keurig) wasn’t silly enough, now toymaker Hasbro has launched the Nerf Ultra line of foam dart blasters that, the company claims, can launch specially-designed darts 120 feet. However, the Nerf Ultra won’t work with third-party (aka knockoff) darts. Does it make a difference? “Twenty of the new Ultra darts will put you back ten bucks — for the same amount you can pick up 200 previous-generation knockoff darts on Amazon.” What kind of DRM the Nerf Ultra uses is unknown (and we have to admit that’s one of the silliest things we’ve written in a while).

Assault and No Battery

This week, Amazon held a Fall 2019 hardware event, and announced a flurry of new Echo and Alexa products. A full report is beyond the scope (or endurance) of our editorial staff (check out The Verge’s reports for that), but we gleaned some highlights, if that’s the word to use. Some items that caught our attention:

We suppose this was inevitable: celebrity voices are coming to Alexa—which seems like a weird thing to say. Is it still Alexa if it’s someone else’s voice? Is Alexa Rich Little? Anyway, the first announced celebrity guest-Alexa is Samuel L. Jackson. And, yes, did you even need to ask: “there’s an explicit version of his voice that incorporates swears.” We expect that will get old very fast.

even dogs DOGS!!!! are not safe from bezos' insatiable internet-everytning thirst https://t.co/OhqfIRSERG

CNN says, “Nestlé launches luxury KitKat bars.” Luxury KitKat bars? “a luxury, handcrafted version of the popular chocolate bar for the United Kingdom, in time for the Christmas season....The new "KitKat Chocolatory" creation isn't exactly a cheap thrill, though — each bar will set you back £14 ($17).”

The NY Times asks, “Do They Give Out Pulitzers for Chicken Recipes?”

Maybe if it’s for Pullet Surprise.

(You can use the Comments field at the end of this article to register any complaints.)

Jenny, I Got Your Number

Here we go. From the BBC: An “Instagram influencer” (so right away you know there’s going to be trouble) “claims that drinking celery juice can cure chronic illnesses.” Is the claim backed up by any, you know, actual science? Of course not! “It’s certainly not bad for you. In its raw state, celery juice is low in calories and contains a decent amount of vitamin K along with traces of other key vitamins and minerals. But one of the most popular advocates of drinking the pulp of this bland green vegetable has made much bigger claims about celery's health benefits - claims that experts say have little or no scientific backing.”

On the other hand, Dr. Brown’s Cel-Ray Soda will cure anything.

what I eat for breakfast:
-cereal
-bagel
-granola

what I eat for breakfast when I’m at the airport:
-burger
-whole pizza
-two beers

OK, they had us a “robot tuna,” but there’s more, via UVAToday: “The aim of (mechanical engineering professor Hilary) Bart-Smith’s project is to better understand the physics of fish propulsion – research that could eventually inform development of the next generation of underwater vehicles, driven by fish-like systems better than propellers.”

Some of you may recall the old sitcom Gilligan’s Island, and you may even recall that the name of the ill-fated boat that brought the castaways to the “uncharted desert isle” was called the S.S. Minnow. Whilst the show itself was hardly trenchant social and cultural commentary (it was at least better than Lost), the name of the ship, as it turned out, was intended as an insult to Newton Minow, the then-recently-appointed head of the FCC who had just given his famous speech in which he condemned television as a “vast wasteland.” The speech galvanized the TV networks at the time to take a long look at every facet of TV production—to the horror of Gilligan’s Island creator Sherwood Schwartz who felt that it “sounded a death knell for programming independence and integrity.” So the name of the wrecked ship was intended to punish Minow. Showed him, didn’t it?

Always carry a flagon of whiskey in case of snakebite and furthermore always carry a small snake. W. C. FIELDS

1909: The novel Le Fantôme de l'Opéra (The Phantom of the Opera), by Gaston Leroux, is published as a serialization in Le Gaulois.

Wow—what a day for musical births!

1962: The Lincoln Center for the Performing Arts opens in New York City.

2002: The first public version of the web browser Mozilla Firefox ("Phoenix 0.1") is released.

1852: The first airship powered by (a steam) engine, created by Henri Giffard, travels 17 miles (27 km) from Paris to Trappes.

1690: Publick Occurrences Both Forreign and Domestick, the first newspaper to appear in the Americas, is published for the first and only time.

1906: Leonardo Torres y Quevedo demonstrates the Telekino, guiding a boat from the shore, in what is considered to be the first use of a remote control.

1888: Poet, playwright, critic, and Nobel Prize laureate T. S. Eliot born, not with a bang, but a whimper.

1905: Albert Einstein publishes the third of his Annus Mirabilis papers, introducing the special theory of relativity.

1910: Indian journalist Swadeshabhimani Ramakrishna Pillai is arrested after publishing criticism of the government of Travancore and is exiled.

1969: Abbey Road, the last recorded album by The Beatles, is released.

1973: Concorde makes its first non-stop crossing of the Atlantic in record-breaking time.

1825: The world’s first public railway to use steam locomotives, the Stockton and Darlington Railway, is ceremonially opened.

1962: Rachel Carson’s Silent Spring is published, inspiring an environmental movement and the creation of the U.S. Environmental Protection Agency.

1998: The Google internet search engine retroactively claims this date as its birthday.

1951: CBS makes the first color televisions available for sale to the general public, but the product is discontinued less than a month later.

1954: The convention establishing CERN (the European Organization for Nuclear Research) is signed.