Sneakers that put on a light show. An inflatable Twister mat may be just what your next party needs. Adversarial fashion takes on face recognition systems. A.I. priests. A.I. passes an 8th-grade science test. An animation tracks the rise and fall of web browsers. Camera sales fall off a cliff.  All that and more in WhatTheyThink’s weekly miscellany.

X
Bloody Doctor. He just told me to watch my drinking, so I went out and bought a mirror :)

Have you ever wanted your sneakers to change color on the fly? Well, says Gizmodo, “MIT’s Computer Science & Artificial Intelligence Laboratory (CSAIL) have developed a new spray-on ink that can infinitely change colors, designs, and patterns when blasted with different wavelengths of light.” It’s called PhotoChromeleon, and comprises photochromic dyes that can be applied to just about any object and is invisible until exposed to light.

Those of us who grew up in the 70s have fond memories of the game Twister (which is also a very different game when played as an adult...). Anyway, a new wrinkle on he classic game is a giant inflatable Twister game, which will make it an even more unique experience. 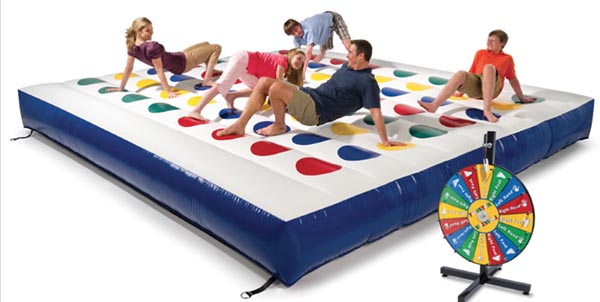 All generic drug names like lorazepam, phenobarbital, and heparin used in many countries around the world are developed by Stephanie Shubat and Gail Caret, two scientists from Chicago who run the United States Adopted Names program of the Americal Medical Association.

As facial recognition becomes more prevalent, people are starting to fight back—and are doing it using fashion. Axios has a roundup of some of the ways that “adversarial fashion” is being used to fool facial recognition—from special sunglasses, to camouflage makeup, to anti-drone hoodies and hijabs.

The idea of playing recorded music for callers placed on hold was born by accident. The inventor had a factory that, because of a loose wire touching a steel girder, turned into a transmitter for the nearby radio station whose broadcasts were picked by the factory’s phone system.

Cartoonist Rube Goldberg has become synonymous with overly complicated ways of performing simple functions, and in that spirit, Randall Munroe has written a book of convoluted how-tos called How To: Absurd Scientific Advice for Common Real-World Problems. For example, do you need to charge your phone in an airport? Try this: attach a paddle wheel to an escalator that will power a generator that will charge your phone. Simple, huh? Or this: “Want to throw a pool party but don’t have a pool? Dig a hole with an industrial vacuum and fill it with condensed water vapor collected out of the air.” Easy-peasy. Gizmodo talks to Munroe about the book.

We've all since learned it's better to rescue techno groups from a shelter. https://t.co/Wi47WVyqiI

First they came for manufacturing workers, then they came for writers. Now even priests are not safe from encroaching artificial intelligence. Vox chronicles the rise of robot priests.

A new priest named Mindar is holding forth at Kodaiji, a 400-year-old Buddhist temple in Kyoto, Japan. Like other clergy members, this priest can deliver sermons and move around to interface with worshippers. But Mindar comes with some ... unusual traits. A body made of aluminum and silicone, for starters.

To be specific, Mindar is a robot.

...and now robots can replace 8th graders. The NY Times reports on how computer scientists have finally developed an artificial intelligence system that can pass an 8th grade science test. Aristo, as the system is called, got better than 90% of the answers correct—and even scored more than 80% on a 12th-grade science test. Why is this important?

A science test isn’t something that can be mastered just by learning rules. It requires making connections using logic. An increase in forest fires, for example, could kill squirrels or decrease the food supply needed for them to thrive and reproduce.

Here is a captivating video from Reddit showing the rise and fall of the various web browsers from 1995 to the present.

To probably no one’s surprise, one product category that has seen its sales plummet is cameras. Data from the Camera & Imaging Products Association (CIPA) shows that since 2010, camera sales have been plummeting. And not just consumer point-and-shoots—the category most likely to have been replaced by a phone camera—but even professional SLRs. 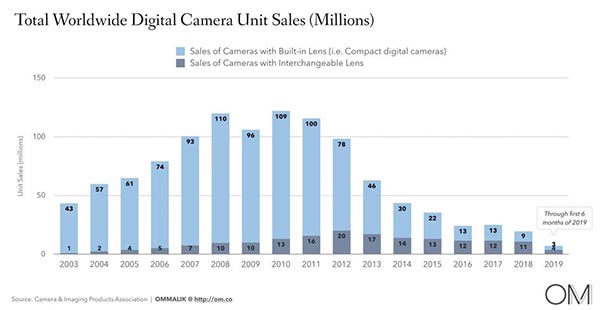 “On second thoughts, let’s not call it Kodak.” https://t.co/ocW0fDvrHg

Ever wondered what occupations were mentioned the most in songs by David Bowie? We can’t say we ever really had, but Boing Boing links to a Twitter post from someone who has done the math—or at last listened to the albums.

1947: The first computer bug is found when a moth lodges in a relay of a Harvard Mark II computer at Harvard University.

1846: Elias Howe is granted a patent for the sewing machine, setting the stage for digital textile printing more than 170 years later.

2008: The Large Hadron Collider at CERN, described as the biggest scientific experiment in history, is powered up in Geneva, Switzerland.

1941: American paleontologist, biologist, and author Stephen Jay Gould born. (Wonderful Life is one of the best science books ever written.)

1789: Alexander Hamilton is appointed the first United States Secretary of the Treasury.

1922: The Sun News-Pictorial is founded in Melbourne, Australia.

1814: The poem Defence of Fort McHenry is written by Francis Scott Key. The poem would later be used as the lyrics of The Star-Spangled Banner.

1835: HMS Beagle, with Charles Darwin aboard, reaches the Galápagos Islands.