G7 takes on fashion sustainability. Graphene vs. mosquitoes. AAP’s latest book sales figures for January to June 2019. Is captioning audiobooks illegal? How to capitalize headlines. Can AI write for WhatTheyThink? What would a 1980s-era iPhone have looked like? Whither the Periodic Table? All that and more in WhatTheyThink’s weekly miscellany.

With all of the uproar over various antics at the recent G7 summit, you may have missed this important piece of news. French president Emmanuel Macron (who hosted this year’s summit) debuted his new Fashion Pact, a set of shared objectives the fashion industry can work toward to reduce its environmental impact. So far, 32 companies representing some 150 brands have joined the initiative. It stresses collaboration over competition, and according to this Vogue article, “it’s a first-of-its-kind initiative that’s uniting the biggest names in fashion, many of whom are known competitors.” This is just one of the many interesting initiatives and proposed actions Macron has put forward, demonstrating his leadership in issues that affect the world beyond the borders of France.

There’s a Sucker Born Every Minute

Or, when we’re talking about mosquitoes, millions of them, and it’s hard to enjoy the outdoors without being all-you-can-eat buffet for the family Culicidae. But it turns out that Cary Sherburne’s favorite substance, graphene, may be our best defense against these little pests that kill millions of people every year. Says Gizmodo: “in a paper published yesterday in the Proceedings of the National Academy of Sciences of the United States of America, researchers at Brown University in Providence, Rhode Island, detail how the graphene oxide-lined fabrics they had been developing to serve as a barrier against toxic chemicals also protected wearers from mosquito attacks.”

It prevents mosquito mayhem in two ways—and in two directions. First, graphene oxide is too dense for mosquitoes to jab their proboscises through from the outside. Second, graphene blocks the chemical signals in human skin that mosquitoes use to detect a juicy meal from getting out in the first place, so it doesn’t even let the mosquitoes know you’re there for the munching.

However, carbon dioxide is also a potent mosquito attractor (as anyone who runs in parks can tell you) and we’re not certain that running encased in graphene is a good idea.

So there’s still a bit of work to do.

Wrapped Up in Books

From the Association of American Publishers’ (AAP) StatShots Report for January to June 2019: “[T]he combined revenue of the participating publishers for the first six months of the year was nearly US$6 billion. The previous caveat in place, that represents an increase of 6.9 percent over the same first-half period of 2018.” That caveat being that each survey comprises a different set of participants so direct comparisons from one time period to another are not based on a “stable pool of inputs.”

Ebooks continue to wane in popularity:

But the real action remains in audiobooks, specifically downloadable audiobooks: 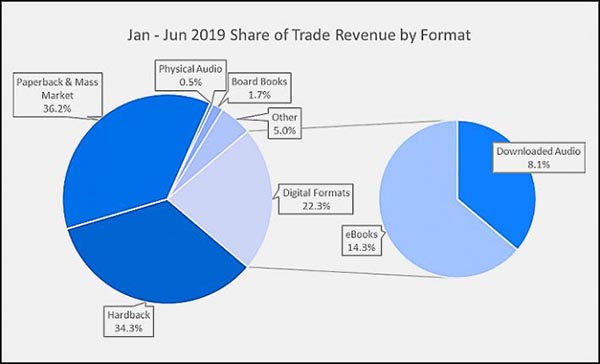 The Amazon subsidiary debuted the service, Audible Captions, last month with a release lined up for the start of this upcoming school year (which, of course, these publishers want the courts to put a stop to). Designed in part for educational purposes, Audible Captions does exactly what its name would imply: It throws up captions on your phone or tablet corresponding to the words narrated in an audiobook.

So why not just read the book? “Audible’s advertising describes it as a tool for struggling readers or anyone who just prefers to follow along with smaller chunks of text. Clicking any single word also brings up its definition, which I, in all honesty, think is pretty nifty.” Ah. However, the publishers see it differently, specifically in that since audio and text reproductions have separate licenses. However however, Audible argues that it is not creating a full-text version of the audiobook, just transcribing small bits of it.

We’re sure this will end well.

Boing Boing passes along some useful advice: “Get a paper dictionary.”

When you’re looking for a word to replace a word in your writing, John McPhee suggests skipping the thesaurus and going straight to the dictionary: "With dictionaries, I spend a great deal more time looking up words I know than words I have never heard of—at least ninety-nine to one. The dictionary definitions of words you are trying to replace are far more likely to help you out than a scattershot wad from a thesaurus."

@LettersOfNote Thought you may appreciate this letter from Charles Schulz to the then Editor of the Oxford English Dictionary over the use of the term 'security blanket'. pic.twitter.com/peodZDlwoO

Get a Head in the Press

Via Do You Copy, “a semi-regular column on copyediting (copy editing? copy-editing?),” Publishers Weekly managing editor Dan Berchenkoa draws a handy flowchart from on how to capitalize headlines: 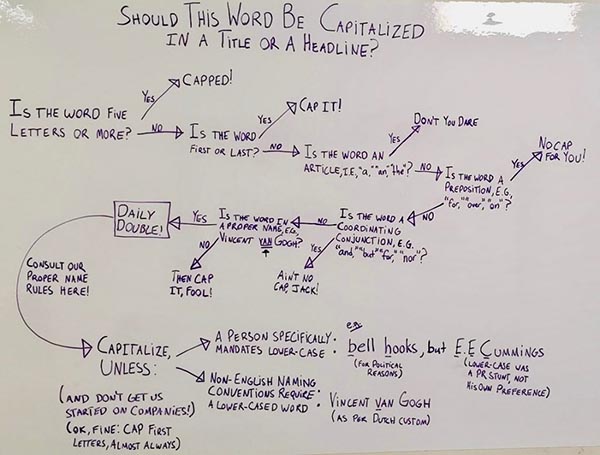 Are there exceptions? Of course there are exceptions! Too bad Microsoft Word or Adobe InCopy doesn’t have a “Headline” option in the Change Caps command.

Do they? Outside of cartoons, do bombs really look like that? And is bomb-wrapping a new specialty graphics application?

A few weeks ago, Around the Web linked to a story from Ad Age about how Chase was replacing its marketing copywriters with artificial intelligence (AI). Now comes more bad news for those of us who eke out a meager living by writing: Story A.I. Just type in a few sentences and it will autocomplete your story. We thought we’d give it a try, starting with the abstract of a story from a couple of weeks ago:

We’ll cut back in when Story A.I. has come up with something.

I am too old to leave Microsoft Office and learn some new nonsense but Office 365 and this subscription nonsense is a real shit show. I am close to losing it and breaking my computer into 33 pieces.

Over at Boing Boing, a link to some “alternative history” commercials imagining what Apple iPhones would have looked like if they had come out in the 80s or 90s. 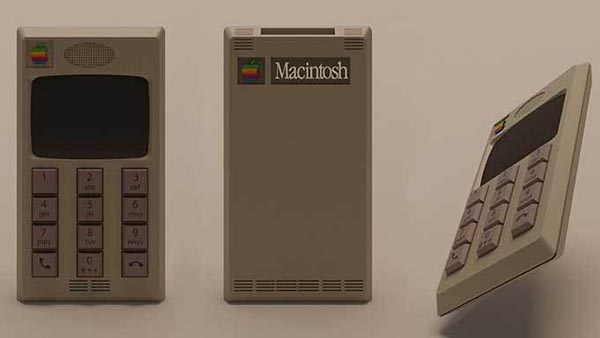 Snakes On a Plane...and Iguanas in Baggage Claim

We should check in with Story A.I. and see what the ETA on the article it was working on is....Hmm...it’s still thinking, after 90 minutes. Well, the writers for any show daily certainly have job security.

What’s A Periodic Table When It’s Not a Table?

Dimitri Mendeleev’s 1869 Periodic Table of Elements is one of the most elegant creations in all of science, having been called “nature’s Rosetta Stone” and “probably the most compact and meaningful compilation of knowledge yet devised.” But, science is about accepting new facts and realities and moving on rather than clinging to relics of the past, so the New York Times asks, “Is it time to upend the periodic table?”

When Sir Martyn Poliakoff, a chemist at the University of Nottingham, heard about a game called Periodic Table Battleship, he couldn’t help but imagine a player’s perspective of the opponent’s inverted fleet of elements.

This catalyzed a mad idea. In May — coinciding with Unesco’s International Year of the Periodic Table, which marks its 150th anniversary — Sir Martyn and collaborators, including his daughter, Ellen Poliakoff, an experimental psychologist at the University of Manchester, published a paper with a recommendation: “Turning the Periodic Table Upside Down.”

“Since 1869, generations of chemists have proposed variations in format to improve the table, to make it clearer or just to make it more fun,” they wrote.

“Many people seem to believe that there is only one true periodic table, either that exists or is waiting to be discovered, and they go to great lengths to debate the validity of the different types,” said Dr. Poliakoff, who is a YouTube personality with the Periodic Videos series, produced by Brady Haran. (At the A.C.S. meeting, Dr. Poliakoff received an award honoring his work interpreting chemistry for the general public.) “My feeling is that most types are equally valid and it just depends what you are trying to show.”

Well, Story A.I. flaked out and missed the publishing deadline. I guess it is just like a real writer.

Today, we celebrate the 101st birthday of Katherine Johnson, a human computer who calculated trajectories that launched @NASA_Astronauts into orbit: https://t.co/VT4EYFT2qI pic.twitter.com/sdEMSMLDsU

1933: The first Afrikaans Bible is introduced during a Bible Festival in Bloemfontein.

1845: The first issue of Scientific American magazine is published.

1997: Netflix is launched as an internet DVD rental service.

1909: Burgess Shale fossils are discovered by Charles Doolittle Walcott, which would serve as the subject for one of the best science books ever written: Stephen Jay Gould’s Wonderful Life.

1895: German Count Ferdinand von Zeppelin patents his navigable balloon. It went over like a...well, actually it went over rather well (for a bit).

1878: Emma Nutt becomes the world’s first female telephone operator when she is recruited by Alexander Graham Bell to the Boston Telephone Dispatch Company. (Appropriately, Lily Tomlin was born on this same day in 1939. The over-50-year-olds out there will get the connection.)