The medals for the Tokyo 2020 Olympics are being made from recycled mobile phones. An Irish teen wins the Google Science Fair for a system for removing microplastics from the oceans. Can Waterstones’ savior duplicate that success for Barnes & Noble? A typeface based on heinously gerrymandered Congressional districts. Scottish researchers develop an artificial tongue for whisky tasting. 3M streamlines packaging material. If you’re a UK publisher, go ahead and insult all the parrots you want. All that and more in WhatTheyThink’s weekly miscellany.

Going for the Phone

The 2020 Olympic Games will be held in Tokyo, and Japan has already begun manufacturing the winners’ medals—making them out of recycled phones and other items. From Business Insider: “Tokyo 2020 is making the gold, silver, and bronze medals entirely from 78,985 tons of recycled electronics, including 6.21 million recycled cellphones, according to the Tokyo 2020 Medal Project. It turns out that gadgets contain everything that's needed to make the medals.”

Going for the Plastics

Via the Irish Times, a hopeful story about Fionn Ferreira, an 18-year-old Irish student who was named the overall winner of the 2019 Google Science Fair, taking home $50,000 (€45,000) for a project which aims to remove microplastics from the world’s oceans. “Mr Ferreira’s project put forward an innovative idea of using magnets to filter microplastics from bodies of water. The young scientist used a magnetic liquid called ferrofluid, which sticks to plastic, and which is then attracted to the magnets and removed from the water.”

After extensive testing, Ferreira believes the project could remove at least 87% of microplastics from water samples. Let’s hope.

Going for a Stroller

Ah, if only it were prehensile.... Anyway, via Boing Boing, researchers at Keio University have created “an artificial biomimicry-inspired anthropomorphic tail.” Why, aside from the fact that having a tail would be very cool. Turns out, there is a better reason: it will offer “haptic feedback to help people walk, bend over, and do other things as they go about their business.” 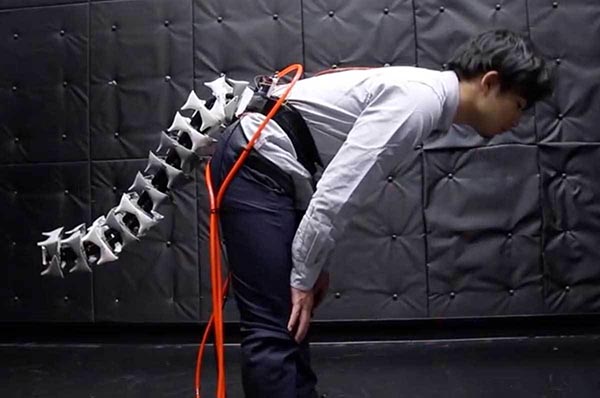 Last June, the venerable Barnes & Noble was sold to a hedge fund, which certainly didn’t bode very well for the beleaguered bookseller, which since 1997 has closed more than 400 stores. Yesterday, the New York Timeswrote that James Daunt is the new chief executive. Daunt previously helped being Britain’s Waterstones back from the brink of bankruptcy by rethinking virtually every aspect of the store—and its locations now teem with enthusiastic customers. (Waterstones is owned by the same private equity firm as had bought B&N.) The specific plans for B&N are still under wraps, but the idea is to not really try to compete with “the A word” on a strict transactional basis, but to focus on the book-buying experience.

His guiding assumption is that the only point of a bookstore is to provide a rich experience in contrast to a quick online transaction. And for now, the experience at Barnes & Noble isn’t good enough.

“Frankly, at the moment you want to love Barnes & Noble, but when you leave the store you feel mildly betrayed,” Mr. Daunt said over lunch at a Japanese restaurant near his office in Piccadilly Circus. “Not massively, but mildly. It’s a bit ugly — there’s piles of crap around the place. It all feels a bit unloved, the booksellers look a bit miserable, it’s all a bit run down.”

We can only hope it works.

Eager to recreate your last flight in miniature? Over at Boing Boing, how to make a paper airplane that circles “endlessly.” Hint: it requires five portable fans, not O’Hare Airport.

According to the Online Etymology Dictionary, the word “gerrymander”—meaning “to arrange political divisions in disregard of natural boundaries so as to give one party an advantage in elections”—was first coined in 1812 as a combination of the surname of Massachusetts governor Elbridge Gerry and the word “salamander,” as “[o]ne sprawling Essex County district resembled a salamander, and a newspaper editor dubbed it the Gerrymander.”

Anyway, gerrymandering has a long political legacy, and now we can commemorate mutant Congressional districts with a new typeface. Developed by Ben Doessel and James Lee, employees of the advertising firm Leo Burnett in Chicago, “Ugly Gerry” is, says the Washington Post, “a font whose letters are composed of real-life districts, their borders so contorted that they resemble letters of the alphabet.” Download the font or create your own special messages at UglyGerry.com. 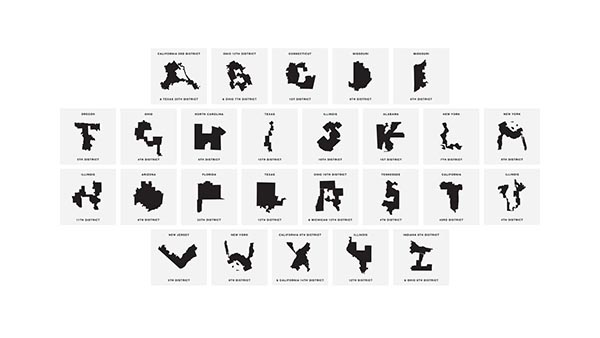 Tesla Goes to the Dogs

Have a dog and a Tesla (in that order)? You are probably aware that Teslas have what is called “Dog Mode,” a very cool (in at least two senses of the word) feature in which the car automatically cranks up the A/C if the temperature exceeds what would be safe for pets or children. (It also displays a conspicuous note for passersby who may be rightly alarmed.) However, a slight flaw in the software (quel surprise) turns off Dog Mode if the user adjusts the fan setting after engaging Dog Mode, as one Tesla driver—and his dog—unwittingly discovered. (Don’t worry—no dogs were harmed during the discovery of this bug.)

Happily, the bug has since been fixed. (We don’t know about the dog.)

Two words: “artificial tongue.” Or, more precisely, a “bimetallic nanoplasmonic tongue,” developed by researchers ay the University of Glasgow. And what was the killer app for it? Yep: whisky tasting.

Here, we describe a reusable optical tongue comprising multiplexed gold and aluminum nano-arrays: a bimetallic device which produces two distinct resonance peaks for each sensing region. Through specific modification of these plasmonic arrays with orthogonal surface chemistries, we demonstrate that a dual-resonance device allows us to halve sensor sizes and data-acquisition times when compared to single-resonance, monometallic devices. We applied our bimetallic tongue to differentiate off-the-shelf whiskies with >99.7% accuracy by means of linear discriminant analysis (LDA). This advance in device miniaturization, functionalization, and multiplexed readout indicates nanoplasmonic tongues will have future applications in chemical mixture identification in applications where portability, reusability, and measurement speed are key.

The idea isn’t that wacky; the idea is to be able to spot counterfeit whiskies. We’ll drink to that.

How many times have you ordered something online and discovered that it was packed in tons of packaging, ostensibly designed to keep the contents of the package safe? Via Core77, a new type of packaging from 3M can dramatically reduce the materials required to ship products.

The Flex & Seal Shipping Roll is made up of three plastics developed by 3M: a tear- and water-proof outer layer, a bubble-wrap cushioning middle layer, and an adhesive inner layer. The packaging option can be used on a variety of objects under three pounds, a category that, according to 3M, accounts for 60% of the items that are bought online. Users can simply cut what they need from the roll, fold the material over the object, and press down to seal—no need for tape. The adhesive only sticks to itself so there's no worry that it will stick to whatever you're packing.

Whew! Well, if you are based in the UK and have ever wanted to insult a parrot in print, but were prevented to by draconian British libel laws, this was your lucky week. From The Guardian:

British newspapers can legitimately mock parrots and compare them to psychopaths, the press regulator has ruled, after an unsuccessful complaint that the Daily Star misrepresented the emotions of a pet bird.

The Independent Press Standards Organisation (Ipso) rejected the complaint after the tabloid mocked a “pain-loving parrot” which it Photoshopped with a flat cap to look like a violent character from the TV show Peaky Blinders.

So, next week, we will be launching WhatTheyThinkAboutParrots, a British-only publication. The gloves are off!

1793: The Musée du Louvre is officially opens in Paris, France.

1846: The Smithsonian Institution is chartered by the United States Congress after James Smithson donates $500,000.

1948: Smile! Candid Camera makes its television debut after being on radio for a year as Candid Microphone.

1942: Actress Hedy Lamarr (not Hedley) and composer George Antheil receive a patent for a Frequency-hopping spread spectrum communication system that later became the basis for modern technologies in wireless telephones and Wi-Fi.