Chase replaces its copywriters with AI. What to wear when immersed in molten rock. “If only there were a way to determine when a diaper needed changing...” Look cool being cool. Creating organ models from maps of Zürich, for some reason. Sending messages via geomapping. The dictionary explains “fursona,” upsettingly. The stone carver job market heats up. New books for language nerds. “We will start boarding as soon as the plane has rebooted.” All that and more in WhatTheyThink’s weekly miscellany.

me: I discovered a new statistical law that says that all jokes on twitter are based on other jokes on twitter
friend: that’s really cool! what do you call it?
me: *slowly takes off sun glasses* regression to the meme

This is an ominous sign of things to come, although it admittedly wouldn’t make for a great robot holocaust movie. Via Ad Age, “Chase Commits to AI After Machines Outperform Humans in Copywriting Trials.”

Chase says that ads created by Persado’s machine learning performed better than ads written by humans, with a higher percent of consumers clicking on them—more than twice as many in some cases. The difference can be as simple as what word choice resonates with consumers. One digital ad written by humans read, “Access cash from the equity in your home.” However, Persado’s version, “It’s true—You can unlock cash from the equity in your home,” performed better with customers.

Maybe the recipients were machines, as well.

All You Need Is Lava

Three words: “Breathable Lava Suits.” As the climate emergency progresses, we might all need them. Meanwhile, a University of Missouri student is making the study of volcanoes more comfortable for geologists. The next challenge: New York City in August.

Two words: “Smart Diapers.” Yep—technical textiles get to the bottom of things (namely, babies). P&G Pampers brand has launched the Lumi smart diaper system. This is an interesting turn for the Internet of Things. Wait until hackers get a hold of it....

that feel when the software is so good you throw away $300 of smart bulbs because they're smart enough to ignore people hitting the lightswitches now pic.twitter.com/ufDpgR5xsV

Having trouble keeping cool when out and about in the summer? Hate leaving your nicely air conditioned home or office? Well, next summer, you may be able to take the A/C with you. Specifically, Sony’s Reon Pocket wearable air conditioner.

The device looks like a thin Apple mouse and can be worn with a special shirt that has a discrete pocket for it at the base of the neck, where it uses the Peltier effect to either lower or raise your body temperature, depending on the season.

And, yes, the temperature can be controlled via a mobile app (did you even need to ask?). Ha! Wait until the hackers get a hold of that.

This picture essay from The Guardian starts off innocently enough:

Then things get a little weird.

[W]hen science and tech university ETH Zurich asked her to create body parts made out of maps of Zurich, she jumped at the chance.

Is that a usual request in Switzerland? Regardless, it is pretty cool. 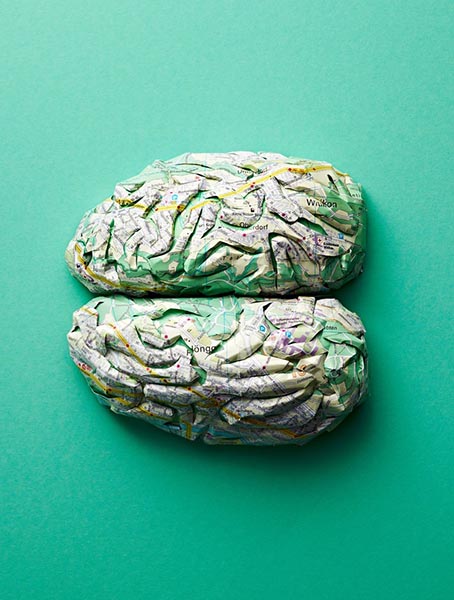 A paper brain? Not so much two hemispheres as TwoSides (sorry).

Speaking of mapping, people who use geomapping apps like Strava to track their runs, walks, or bike rides are starting to make some unique art or messaging using their routes.

In one case, a Texas man took his girlfriend on a long, inexplicably tortuous bike ride. When they got home, he showed her the route they had just taken, and it turned out they had spelled out an unconventional marriage proposal: 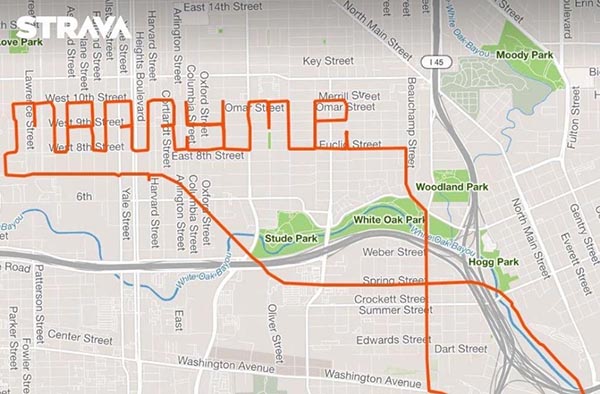 In another, a San Francisco runner mapped a line drawing of Mexican painter Frida Kahlo: 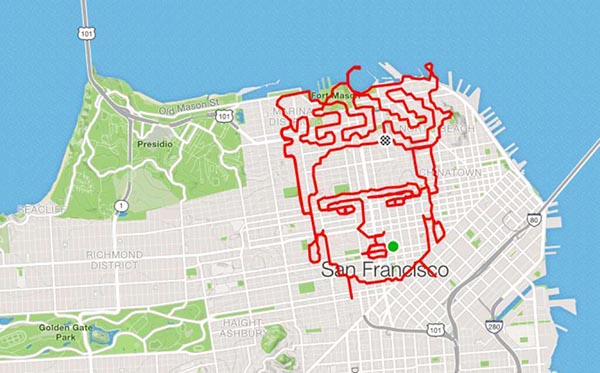 And it turns out our own managing editor, when running around town, seems to be preoccupied with WTT!: 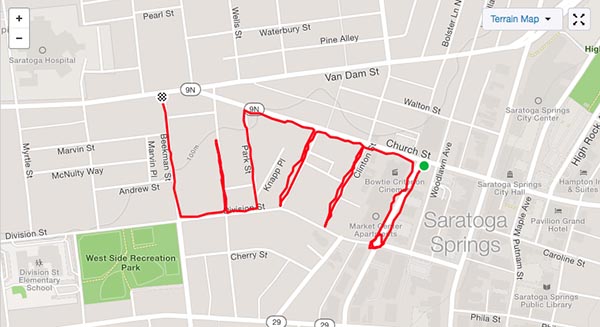 Speaking of secret messages, some authors have fun with their books’ copyright pages. 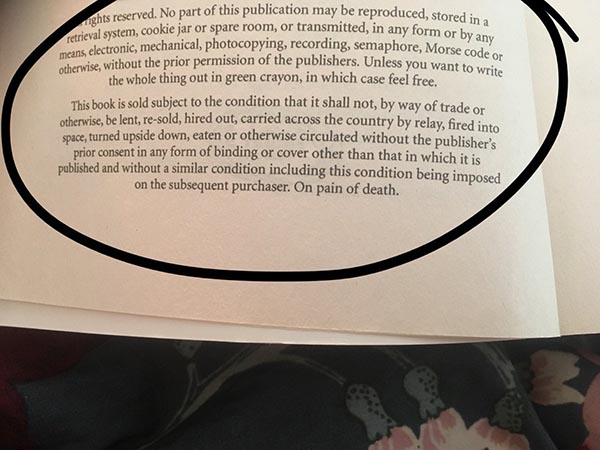 You know things have gone too far when you're bricking an *exercise bike* after three years ?? https://t.co/xih6mNs2T0

The Dark Side of the Moo

The recent Ohio State Fair outdid Iowa’s (faintly ironic) cow butter sculpture: butternauts! Yes, the Apollo 11 crew rendered in butter. So, the Moon is not made of cheese after all, but butter.

"All together, ten test solvers see every @NYT_Crossword before publication." Will Shortz tells us how he works and shows us his very impressive wall of dictionaries. https://t.co/WsVKYE9xbG pic.twitter.com/UnUHHy7cTf

Coming soon to a dictionary near you: the word “fursona”: “typically furries create personalized animal characters which are referred to as a fursona.” Furries? Merriam Webster traces the word “furry” back to the 17th century and tracks its increasingly disturbing evolution over the centuries.

Furrythen was used to designate a person who dresses up in a costume resembling such a character as well as an online user identified by an image of an anthropomorphic animal. These senses of furry are, perhaps, surprising to those unfamiliar with the community of furries that began to coalesce in the United States during the 1980s and 1990s, and into the 21st century. We're working on defining them. In the meantime, we'd like to enlighten the uninitiated.

Speaking of dictionaries and lexicography, the New York Times this week rounded up some new books on languagewhich some of us have picked up for a little summer reading. Two weeks ago, we had cited the compelling new book on the semicolon (words rarely used together in the same sentence), but Peter Martin’s The Dictionary Wars looks right up the alley of word nerds:

Martin’s account of the dictionary feuds of the 19th century is as lively and entertaining as the battle itself. In one corner was Noah Webster; in the other, Joseph Emerson Worcester. Both seasoned lexicographers, they realized that Americans were coining new words, using old ones in new ways and preserving usages the British had dropped. Samuel Johnson’s 1755 dictionary, even updated, wouldn’t do. America needed its own dictionary. But who would write it?

By the way, it’s reviewed separately but we also recommend another new book on language and how it is changing in the Internet era: Because Internet by Gretchen McCulloch.

If true crime is more your preferred genre, be sure to check out the NYT’s list of true crime book by state—turns out, each of the 50 states has hosted a grisly crime which then spawned a true crime book. Find your state and crime here.

I think Tarantino really captured how amazing it must’ve been to be able to drive quickly around Los Angeles.

Are you an out of work stone carver who has begun to wonder if your skills might not be entirely in demand in today’s high-tech world? Well, it turns out, you might be in luck. Since the Notre Dame fire three months ago, French officials have been trying to stabilize the structure enough to begin the long work of restoration. And, stone carvers, this is where you come in. From NPR:

When that work begins, there will be a new demand for experts who have the same skills required to build Notre Dame 900 years ago. In the workshops of the Hector Guimard high school, less than three miles from the cathedral, young stone carvers are training for that task.

Don’t let these kids with their mad stone-carving skillz shut you out!

And if You Were Homer’s Age?

If you were Lisa’s age when The Simpsons debuted, you are Homer’s age now.

Granted, when computers and other devices are acting up, often rebooting them is the best way to get the software to behave itself. We accept this on laptops, smartphones, tablets. But an airplane?

Airlines who haven’t performed a recent software update on certain models of the Airbus A350 are being told they must completely power cycle the aircraft every 149 hours or risk “...partial or total loss of some avionics systems or functions,” according to the EASA.

clones in fiction: SO MYSTERIOUS! they're exactly the same! they share thoughts. maybe they share A SOUL.

clones in biology: IF ALL MY MICE ARE GENETICALLY IDENTICAL WHY ARE MY DATA SO VARIABLE

Sometimes you see a headline and refuse to click through simply because there is no way the story could possibly live up to it. The Guardian’s “Passenger in clown suit prompted mass cruise ship brawl” is one of those headlines.

1818: French physicist Augustin Fresnel submits his prizewinning "Memoir on the Diffraction of Light", precisely accounting for the limited extent to which light spreads into shadows, and thereby demolishing the oldest objection to the wave theory of light.

1909: English historian and author C. Northcote Parkinson, coiner of “Parkinson’s Law,” born. He would soon grow to fill the entirety of his crib.

2006: The world’s longest running music show Top of the Pops is broadcast for the last time on BBC Two. The show had aired for 42 years.

1703: Author Daniel Defoe is placed in a pillory for the crime of seditious libel after publishing a politically satirical pamphlet, but is pelted with flowers.

1790: The first U.S. patent is issued, to inventor Samuel Hopkins for a potash process.

1774: British scientist Joseph Priestley discovers oxygen gas. (What had everyone been breathing before that?)

1965: Frank Herbert's novel Dune was published for the first time. It was named as the world’s best-selling science fiction novel in 2003.

1981: MTV begins broadcasting in the United States and airs its first video, “Video Killed the Radio Star” by The Buggles.

1932: The positron (antiparticle of the electron) is discovered by Carl D. Anderson.

1527: The first known letter from North America is sent by John Rut while at St. John's, Newfoundland.

1778: The theatre La Scala in Milan is inaugurated with the première of Antonio Salieri’s Europa riconosciuta.

1859: The American Dental Association is founded in Niagara Falls, New York. (Was their theme song “Bridge Over Troubled Water”?)

1977: Tandy Corporation announces the TRS-80, one of the world’s first mass-produced personal computers.

1821: The Saturday Evening Post is published for the first time as a weekly newspaper.