Ah, June. The month for grads, dads...and Mary Meeker. Yep, this past week saw the latest edition of Mary Meeker’s Internet Trends Report, which media and technology analysts anticipate in the same way that children anticipate Christmas. (She has been doing them since 1995!) So let’s revisit a feature of last year’s Around the Web: Mary Meeker Slide Roulette, in which we randomly pick a slide out of the 333 in the deck.

Round and round she goes… Our first spin lands on Slide 18: “E-Commerce Sales vs. Y/Y Growth.” 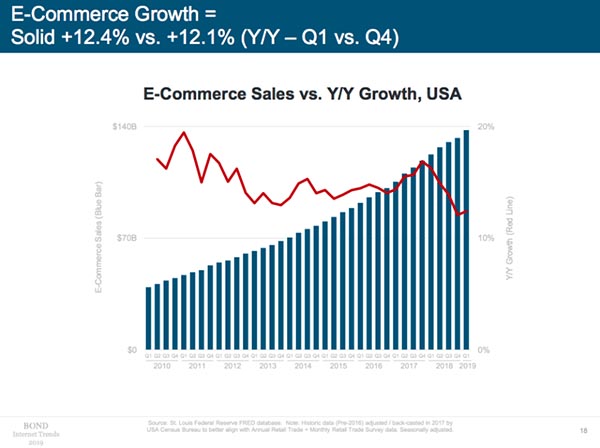 A complete Internet Trends Report archive is here. If you have some spare time, check out 1995’s report. It’s a hoot!

What could possibly go wrong? From Bloomberg: “Flying Robotaxis Prepare for Takeoff: More than a half-dozen companies have working prototypes of passenger drones.” Time was, the phrase “passenger drone” referred to a taxi fare who wouldn’t stop talking.

Some of us did our darnedest to keep them going. From the NY Times: “Barnes & Noble Is Sold to Hedge Fund After a Tumultuous Year.”

A Vancouver grocery store is not-so-subtly encouraging customers to bring reusable shopping bags by resorting to shame. From the Vancouver Sun: “a grocer in Vancouver has gone a step further in the battle against single-use plastics, by providing bags with embarrassing slogans to discourage their use.” 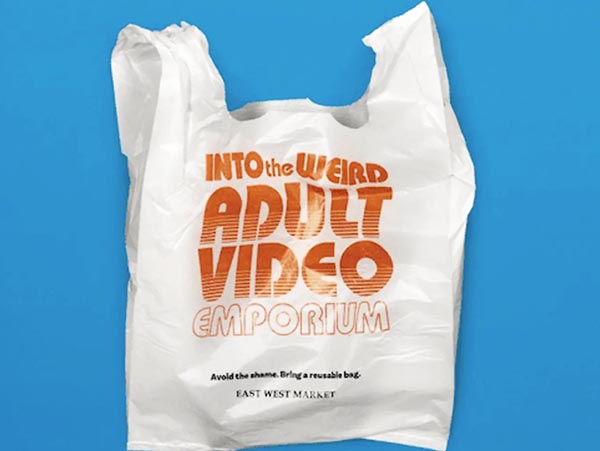 Actually, there are probably a lot of people who wouldn’t be embarrassed by that!

To Flush or Not To Flush: Kimberly Clark wants to, er, toilet train Florida.

Wolf at the Store

...with their hula hoops and their...black-and-white film? Apparently yes. From Gizmodo: “according to FujiFilm, at least we’re helping to keep old-school film photography alive, who recently resumed production of monochrome film after a one-year hiatus due to consumer demand ‘particularly from millennials and GenZs.’”

A couple of weeks ago, we linked to a BBC story about the origin of the dollar sign. This week, the euro symbol gets its due.

A ‘C’ bisected by two horizontal bars? Well, no, it was actually inspired by the Greek letter epsilon. A reference to the cradle of European civilisation, it emphasised historical continuity – as the design of the banknotes themselves would do – while also evoking an ‘E’ for Europe.

The new currency’s name was chosen in Madrid in 1995. Allegedly the suggestion of a Belgian teacher and Esperanto buff, “euro” triumphed over a string of other contenders, including the irresistibly Shakespearean “ducat”. A crucial consideration was that the name must be the same in all of Europe’s official languages, and uniformity was deemed vital for the sign that would represent it too.

Have an extra $150 kicking around? Do you readily fall for dubious health benefit claims? Why not buy a set of LED earbuds that, says HumanCharger: “channels bright light directly to the light-sensitive regions of the brain, right where it is needed the most.” Why? “HumanCharger® can be used to increase energy levels, improve mood, increase mental alertness, reduce the effects of jet lag and keep winter blues at bay.”

That they don’t work shouldn’t be surprising, especially given the anatomy of the ear. Of course, if you put in one earbud and the light shines out the other ear, you’re in big trouble.

The idea that we need to walk 10,000 steps a day goes back to the 1960s when a Japanese company started selling pedometers called, in translation, ‘10,000-step meters’. They chose that name because the character for ‘10,000’resembles a person walking: ?. (h/t @TheAtlantic)

Some of you may recall the old arcade game Breakout (some of you may even recall arcades...). Now, via Gizmodo, a browser-based game called Brickception is based on Breakout and uses as a paddle a pop-up window which is itself displaying a game of Breakout. Sounds maddening—almost as maddening as pop-up windows.

This is a thing? From the NY Times: “a food-video genre known as mukbang, which involves scarfing down, on camera, more grub than should rightly be consumed in a single sitting.” Really? “[H]undreds of thousands of people tune in each week to watch Bethany Gaskin binge-eat shellfish on YouTube.” Really?! “The videos, produced in her Cincinnati home, have made her a millionaire, she said.” Really?!?! What the heck are we doing in the printing industry?

Wouldn’t It Be Ice

Finally, we leave you this week with a version of Vanilla Ice’s 1990 hit “Ice Ice Baby”as performed by the machine that Stephen Hawking once used to synthesize his speech, as well as other vintage equipment.

1878: To settle a bet, Eadweard Muybridge takes a series of photographs to prove that all four of a horse’s hooves leave the ground when it runs. The results become the basis of motion pictures.

1903: The Ford Motor Company is incorporated.

1904: Irish author James Joyce begins a relationship with Nora Barnacle and subsequently uses the date to set the actions for his novel Ulysses; this date is now traditionally celebrated as “Bloomsday.”

1911: IBM is founded as the Computing-Tabulating-Recording Company in Endicott, N.Y.