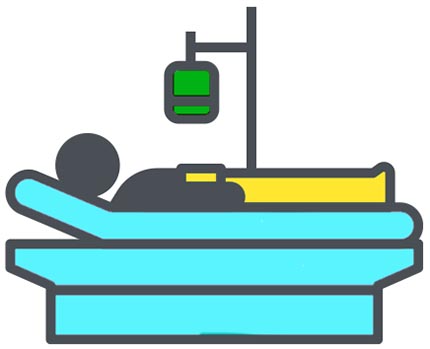 Meredith, the publishing company that is slowly dismantling the portfolio of iconic Time-Life magazine titles that it acquired in 2018, has sold Sports Illustrated to Authentic Brands Group (“ABG”). Well, kinda.

What ABG did not buy for its $110 million purchase price was the obligation to continue publishing the magazine. Meredith was apparently unable to find a buyer that would assume the legacy responsibilities of producing insightful editorial content, obtaining stunning photographs, and in general being bogged down in the nitty-gritty world of publishing. In an odd twist, Meredith has agreed to operate the Sports Illustrated printed magazine and the accompanying website for at least two years. Odder yet, Meredith will pay ABG a licensing fee for the use of the Sports Illustrated brand, the brand it just sold.

As the owner of brands and licensing rights ranging from fashion (Jones New York, Juicy Couture, Hickey Freeman, Aeropostale), to sports stars (Shaquille O’Neal, Julius Irving, Greg Norman, Muhammed Ali), to entertainers (Elvis, Marilyn Monroe), ABG is described as “unencumbered by physical assets.” The strategy with the Sports Illustrated brand will reportedly follow the same playbook; ABG will seek to have the Sport Illustrated brand placed on consumer goods, athletic equipment, video games and sports gambling. The brand will be shopped as a vehicle to promote live events, conferences, and sports camps. ABG will also mine the royalty rights for licensees to use any of the 60-plus years of photos and magazine cover images.

Subsequent to the purchase of Time-Life, the Sports Illustrated team has been kept separate in anticipation of a sale. However, Meredith has now announced that it will be integrating the Sports Illustrated editorial and production functions into its normal operations alongside its other publications. With the clock running on the two-year commitment to keep publishing the magazine, it remains to be seen if this once-great chronicler of American sports culture will remain a vibrant and financially viable print publication while its name and images are positioned as a lifestyle brand.

Welch Packaging, a privately-owned roll-up that has maintained a laser-like focus on its acquisition strategy within the corrugated box and retail display segments, is back on our deal log with another transaction squarely in its playbook, acquiring Heritage Packaging. The purchased company is in Lincoln, Ill., and produces corrugated cartons and retail displays. Welch is the poster child of a company that is executing on a highly-defined growth by acquisition strategy and not straying from its core competency. Welch has completed an acquisition every year for 20 years. Starting with five employees, the company now has over 14 locations and in excess of a thousand employees. The company has also maintained a decidedly Midwestern flavor from its base in Indiana, acquiring companies in Ohio, Illinois, Michigan, Tennessee, Indiana, and Kentucky.

New-Indy Container Board, a joint-venture company formed in 2012 with backing from two family offices with deep roots in the paper and packaging industries, announced the acquisition of Proactive Packaging & Display. Located in Ontario, Calif., the acquired company produces corrugated retail displays utilizing flexographic and digital printing technologies. New-Indy is building out a multi-state company focused on making brown paper materials from recycled feedstocks. The addition of Proactive to New-Indy suggests the beginning of a vertical integration strategy, as some of the company’s brown paper stocks will now be utilized within the corporate family. Some of that brown paper will likely come from the Catawba, S.C., paper and pulp mill that New-Indy acquired in October 2018. As we expected, New-Indy reportedly is planning to convert the paper machine in Catawba that has been producing fine printing grades to brown kraft linerboard grades, placing further pricing pressure on the paper grades used in commercial printing (seeThe Target Report: A Reversal of Fortune: Paper Mills Gain Leverage).

WestRock, the global packaging behemoth formed in 2015 when RockTenn acquired MeadWestvaco, was active again in May with the acquisition of UBS Printing Group in Corona, Calif. The acquired company will become part of WestRock’s Multi Packaging Solutions business, the PE-backed roll-up in the high-end folding carton business acquired by WestRock in 2017 (see The Target Report: WestRock Affirms Commitment to Paper). UBS Printing produces folding cartons, rigid setup boxes, retail displays, and commercial printing products on a fleet of offset presses.

LBP Manufacturing, a portfolio company of Pritzker Private Capital, has announced the acquisition of Union Packaging. LBP, with facilities in the US, Poland, and China, produces paper-based products such as sleeves for hot drinks, drink carriers, clamshell packaging for fast food, and similar products that primarily serve the food and beverage industries. The acquired company, a minority-owned enterprise, is located in the Philadelphia metro region and produces similar paper-based food carriers such as open-top French fry cups, burger clamshells, and pizza slice carriers.

Canfield & Tack, a commercial printing company in Rochester, N.Y., is absorbing the business of fellow Rochester-based printer Cohber Press. Canfield & Tack, the larger of the two companies, with approximately $15 million in revenue, has been operating out of two facilities. Cohber Press, with sales of approximately $9.5 million, has a larger and more efficient facility that has been underutilized. Canfield & Tack will be the surviving corporate entity, and even though it’s the larger company, it will be pulling up stakes and moving into the Cohber plant; a classic “reverse tuck-in” transaction. Canfield & Tack is a 100% ESOP-owned company  and will be welcoming the Cohber staff members as new employee-owners of the merged operations.

Corporate Document Solutions (“CDS”), a Cincinnati, Ohio-based digital printing and managed print services company, announced the acquisition of Alliance Printing & Publishing. The acquired company brings with it not only additional revenues for CDS, but also traditional 40-inch offset printing, extensive bindery capabilities, and in-house mailing services. Established in 1992, CDS is focused on serving the regional corporate market and is a 100% woman-owned company.

Talient Action Group, a digital and offset printing company in Manchester, N.H., has acquired nearby Ben Franklin Printers. The acquiring company also owns a digital advertising agency and has been a serial acquirer to fuel its growth. This latest transaction comes two years after Talient absorbed the business of Proofing House Press in Salem, N.H.*

Another serial acquirer, Alcom Printing Group, based in Harleysville, Pa., has put another acquisition on its scoreboard, picking up Payne Printeryin Dallas, Pa. With the acquired company located almost 100 miles from Alcom’s headquarters and main production facility, Alcom has announced that it will maintain a local office in Dallas for sales, customer services, estimating, and prepress to maintain the regional presence and service. This trend to establish customer-facing “spokes” at acquired locations is a trend we see and expect to grow as companies with stronger, highly efficient production facilities consolidate regional printing capacity through repetitive acquisition strategies.

* Graphic Arts Advisors, publisher of The Target Report, served as exclusive advisors to Proofing House Press in this transaction. 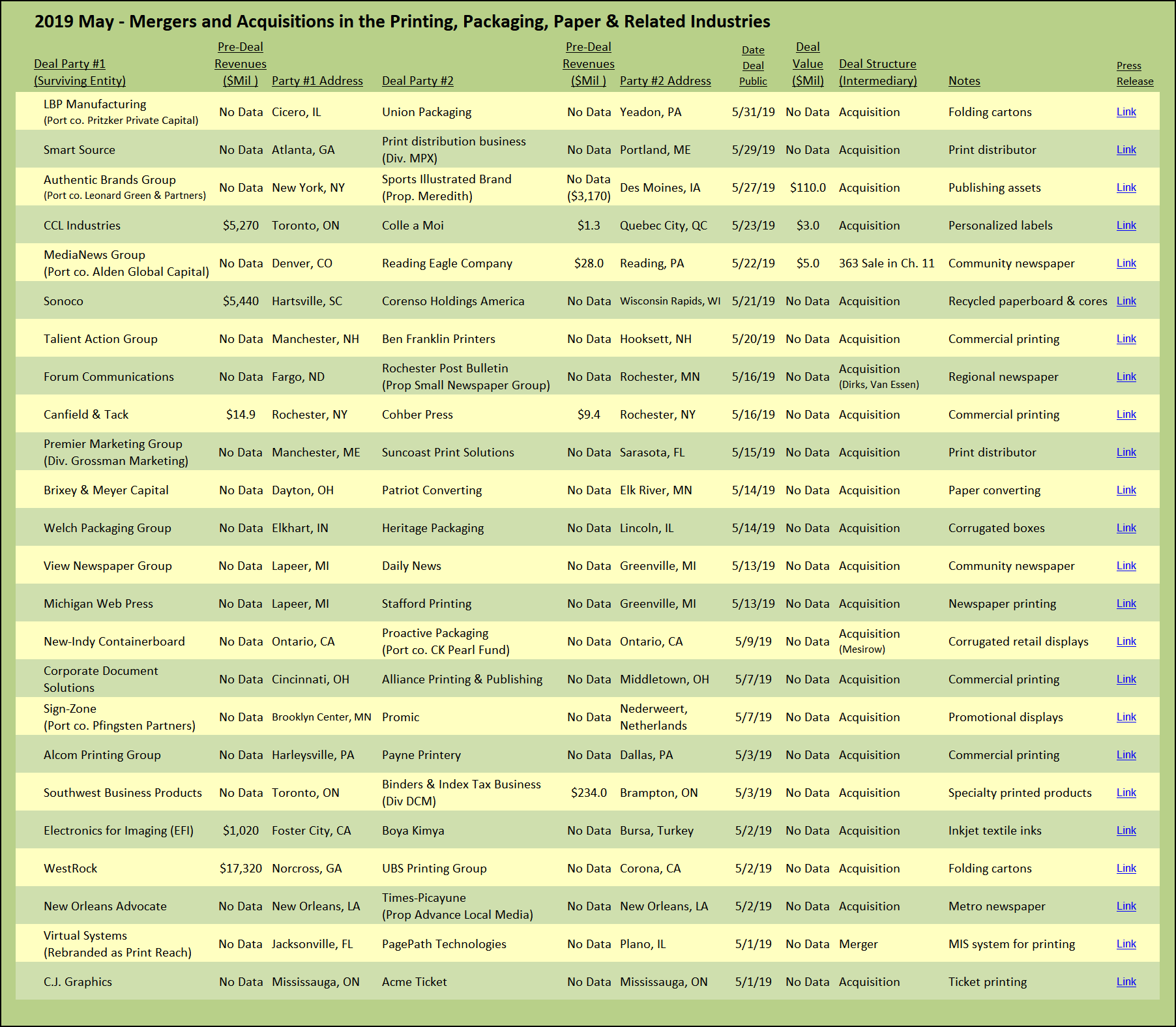 View The Target Report online, complete with deal logs and links to sources for May 2019